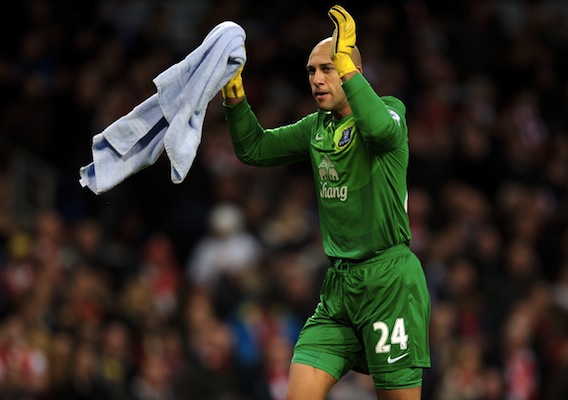 Everton's Tim Howard is raising his game to another level, while Aron Johannsson continues to overwhelm Eredivisie defenses for AZ Alkmaar. Plus: Herculez Gomez and Joe Corona return to the column.
BY Josh Deaver Posted
December 25, 2013
10:10 AM
Tim Howard—ASN rank #5
In case you hadn’t noticed, Tim Howard has been gangbusters for Everton this season, including this past Sunday. Commanding the backline, Howard helped the Toffees extend its unbeaten streak to 10 games, making three saves in a 2-1 victory over Swansea City. To go along with his 47 total saves this season, Howard currently leads the English Premier League in both clean sheets (8) and penalties saved (2) and is rated the third-best keeper in England by statistics actuator WhoScored.com.

Geoff Cameron—ASN rank #12
He may not be the flashiest American abroad, but he may very well be the most consistent. In another busy week for the 28-year-old defender, Cameron got the start on Wednesday in the quarterfinals of the Capital One Cup, playing 90 minutes in a 2-1 loss to Manchester United. In a return to league action on Saturday, Cameron again put in his customary 90-minute shift and notched the game-winning assist in a 2-1 win over Brad Guzan and Aston Villa. Only minutes after conceding on a bad defensive gaffe, Cameron helped pull Stoke ahead for good in the 69th minute, finding Peter Crouch with a well-placed cross on a counter attack. The win brings a vital three points for the Potters, which finds itself in the top half of the Premier League for the first time this season. Waiting under the tree during Christmas week? Formidable fixtures against two top-seven sides, Tottenham and Newcastle. Aron Johannsson—ASN rank #11
Do you see what I see? That’s just Aron Johannsson scoring at will. The 23-year-old added three more strikes to his tally last week—now, 18 in all competitions—bagging a brace in a win over Heerenveen in Dutch Cup action on Wednesday. He picked up another in a 5-1 loss to the same club in an Eredivisie fixture on Saturday. In the midweek, Johannsson’s double, including an extra-time strike, looked to seal passage into the next round for AZ, only to be forced into a penalty shootout late on. Johannsson buried his take as AZ would go on to win. It was a different story with the same opponent on Saturday. Heerenveen overwhelmed Alkmaar, scoring twice in the opening 20 minutes. Johannsson’s 41st-minute strike—a smooth chest trap followed by a calm finish—helped pull one back, but it wasn’t enough for AZ, which fell to 8th in the Dutch table as a result of the loss. Reports from the match also had Celtic manager Neil Lennon scouting Johansson, who is reportedly a transfer window target of the Scottish club.
Aronjo 1-2 by goalsandmore Herculez Gomez—ASN rank #19
Joe Corona—ASN rank #28
It’s good to see the Tijuana pair back on the update. Both Gomez and Corona each found the score sheet in a comfortable 2-0 win over second-division side Dorados in a preseason friendly last Thursday. Gomez has been out since August due to an untimely knee injury that also kept him from national team duty in the latter stages of World Cup qualifying. Corona, on the other hand, has been lost in shuffle. Impacted by recent coaching changes, Corona was mostly relegated to the bench for the Xolos toward the end of the Liga MX Apertura. Hopefully this portends a larger role for the young midfielder in the upcoming campaign. Timothy Chandler—ASN rank #29
While he may not be able to find a place with the U.S. national team, Timothy Chandler continues to display a good run of form for FC Nurnberg. On Saturday, Chandler was again in the starting lineup for Der Club, playing 90 minutes in a scoreless draw against Schalke. Despite the result for FCN, which remains winless this season, Chandler played well. Active from the opening whistle, he helped neutralize the Schalke attack and was able to get forward on several occasions, coming away with a few chances of his own in front of goal. For his effort Chandler was named to the Team of the Week for German publication Kicker, the first time he has received the honor in his professional career. Steve Cherundolo—ASN rank #31
After months of setbacks, the Mayor of Hannover made his long-awaited return to the starting XI this weekend. In his first start since May, Cherundolo played 81 minutes in a 2-1 loss to SC Freiburg. While it remains a work in progress, the return of the 34-year-old defender couldn’t have come at a better time for the national team. With no clear-cut favorite in the position, an in-form Cherundolo—looking to make his fourth consecutive World Cup roster—could pose a serious challenge to the incumbent right backs in Jurgen Klinsmann’s player pool as the team prepares for the World Cup. His progress will be something to monitor closely. Josh Gatt—ASN rank #46
In an exclusive interview with ASN, Molde’s Josh Gatt revealed that he is ahead of schedule in his recovery from a torn ACL suffered prior to the summer’s Gold Cup. Despite a rough road, the speedy midfielder hopes to return to Norway in January to complete his rehabilitation and resume full training with the team. Jose Villarreal—ASN rank #61
Days after the official unveiling of the former U.S. under-20 forward as a new addition to Liga MX side Cruzl Azul—along with San Jose’s Rafael Baca and Philadelphia’s Michael Farfan—Major League Soccer officially confirmed the deals Monday morning. While Farfan and Baca have signed outright, the 20-year-old LA Galaxy striker will go south of the border on a one-year loan agreement with the Mexican club, which would have an option to buy Villarreal’s contract at the end of his deal. Andrew Wooten—ASN rank #95
According to a German report this week, former U.S. under-23 forward Andrew Wooten will not be returning to FC Kaiserslautern in 2014. Wooten, who had a successful loan spell with 2.Bundesliga side Sandhausen last season, never caught on in his return to parent club FCK, making only four appearances so far this campaign.