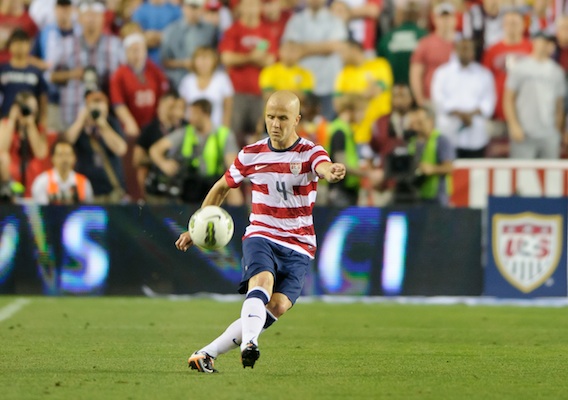 Hot or Not: Bradley Returns Without Missing a Beat

The Roma midfielder shows his class in a number of different ways, while a USMNT-absent striker continues to impress and young starlet keeps falling. (No, not that one).
BY Jon Arnold Posted
October 10, 2012
7:00 AM

Michael Bradley: ‘But Jon,” you protest, “he’s only just returned from injury.” Sure. So we’ve got a return from injury, his first Serie A goal for his new club, and looming national team matches where his already-important role just keeps increasing. His starting spot in Roma’s midfield was the subject of plenty of consternation during the time he was injured, but for now it seems he’s got that locked up. Oh, and his first child was born less than two weeks ago. Not a bad couple of weeks.

Chris Wondolowski: National team roster be damned, Wondolowski is a man on fire (figuratively). Just when it seemed Roy Lassiter’s record of 27 goals in a MLS season was safe, Wondo did it again. He scored a hat trick for the Earthquakes in a 4-1 win against Colorado, taking his goal total to 25 for the year. Jurgen Klinsmann might prefer Wondolowski’s teammate Alan Gordon, but club manager Frank Yallop will be perfectly content to have the striker well-rested for the Quakes’ final two matches. He’ll need a goal in each to tie the record, but with the form he’s been in this year, you might not want to bet against him.

Joe Corona: It’s a bit harsh to say he’s “not hot” but the midfielder’s stock could be slipping despite making the U.S. roster. Corona had a starting role locked up for red-hot Club Tijuana, typically playing around 60 minutes before being subbed out. But in a 1 vs. 2 Liga MX match against Toluca this weekend, manager Antonio Mohamed elected to switch things up and bring Corona off the bench. The midfielder is still seeking his first goal or assist on the season.

Benny Feilhaber: If his game-winning goal in the 2007 Gold Cup seems like a long time ago, well, that’s because it was a pretty long time ago. We’re getting old. But it’s also been quite some time since Feilhaber has shown any of the quality that made us think he’d be a USMNT mainstay. That was brought sharply into focus this weekend when Feilhaber, already on a yellow, committed a foolish, off-the-ball foul and was sent off late in a 1-0 New England Revolution loss to the Philadelphia Union. Rather than leaving peacefully, he got in referee Jorge Gonzalez’s face and pitched a fit. Lack of maturity after a run of poor performance is not the way to get back into a camp.

Juan Agudelo: Remember this guy? Klinsmann doesn’t either. A trade from New York to Chivas USA in May was supposed to help give the young striker’s career a jolt. But Agudelo is looking more like somebody waiting tables and thumbing through the classifieds than a Hollywood star. He’s been a regular in Robin Fraser’s side and earned his starting role back this month, but Agudelo hasn’t scored since late August (in a 6-2 loss to Seattle). It’s easy to forget he’s still approaching his 20th birthday, but it could take another change of scenery for him to work his way back into the national team.