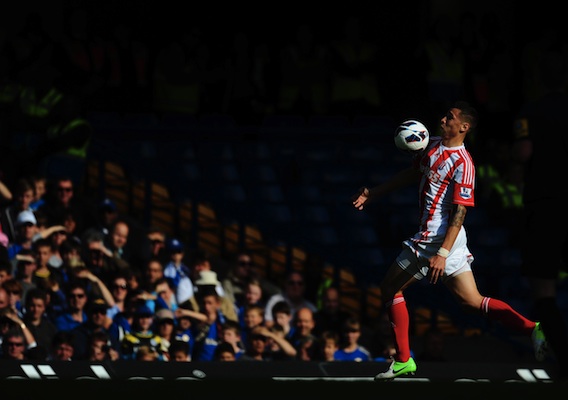 Soccer as the stock market

San Jose's star forward, well, the one who didn't get the USMNT call-up, is red-hot, while the Stoke City defender struggles a bit against one of the world's best teams. That and more in Hot or Not.
BY Jon Arnold Posted
October 24, 2012
11:23 AM

Alejandro Bedoya: So far, 2012 hasn't been as good to the speedster as was 2011. That year he played a key role for the U.S. in its Gold Cup run and signed with Rangers despite foreboding signs of the club’s demise. Now he finds himself back in Sweden with Helsingborgs. Although the club is eliminated from a Champions League return and likely won’t be back in the Europa League either, Bedoya boosted his stock with a strong match over the weekend. He tallied an assist in a draw with his former club. Enjoy relegation, Örebro! Helsingborg has previously expressed interest in keeping Bedoya’s services, but the midfielder will no doubt draw looks from clubs outside Scandinavia as well.

Chris Wondolowski: Does he ever stop scoring? No. No he doesn’t. The odds-on favorite for MLS MVP scored the equalizer against the LA Galaxy, his 26th of the season. One more and Wondo’s name is atop the MLS record books, tying Roy Lassiter for most goals in a single season. Careful readers might note Wondolowski figured as a hot player in a previous edition of this feature. That’s right. He’s just. That. Hot (even if he can't get a call to the U.S.).

Geoff Cameron: Cameron wasn’t poor as a center back in the American shirt, but he failed to impress as he had previously when wearing the crest. Over the weekend, Stoke City manager Tony Pulis tabbed Cameron to play right back, as he has previously this season, against Manchester United. Position switching and United, not a good combination. Cameron stumbled through the match and shouldered the responsibility for the Red Devils’ third goal.

Kyle Beckerman: It’s been a frustrating eight-day period for the fiery midfielder. Jurgen Klinsmann looked to Maurice Edu instead of Beckerman when he needed a substitute to shore up the defensive midfield against Guatemala. Then, two scoreless draws further soured the Real Salt Lake man’s mood. The first, a league match with Seattle, could hurt RSL’s playoff positioning. The second, Tuesday night’s CONCACAF Champions League match with Herediano, knocked the club out of the competition.