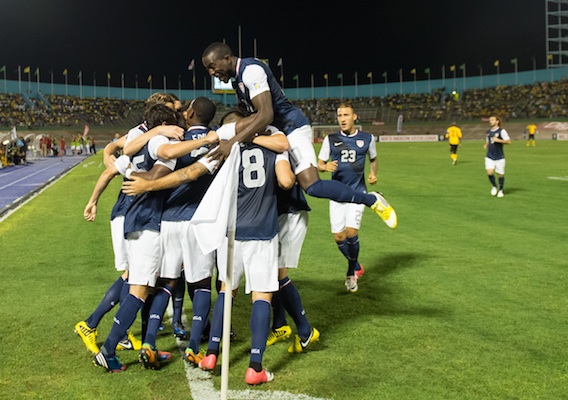 Hot or Not: Altidore Shines, While Edu Finds Himself

In ASN's weekly look at players on and off their game, Jon Arnold checks in on a certain on-fire striker, a right back who's making a case for more time, and a midfielder falling out of favorite.
BY Jon Arnold Posted
October 03, 2012
7:00 AM

Jozy Altidore: There are plenty of critics when it comes to his national team performances, but it’s hard to complain about the forward’s league form with AZ. His eight goals in seven matches put him three clear of his closest competitors in the Eredivisie, and the 22-year-old has scored half of the club’s goals including a special one in Sunday’s 3-3 draw with Waalwijk.

Yes, gone are the days when American fans had to hope Altidore would come on as a sub and see some league action. Yet those aforementioned critics–curiously labeling the young striker as a bust or even lazy–won’t be quieted until he performs in a candy-cane-striped U.S. shirt. That chance is looming.

Graham Zusi: Oh my. Zusi was in the January camp in Arizona and played in friendlies against Venezuela and Panama, but few saw this coming. Zusi has had a colossal year in MLS, helping Sporting Kansas City to a U.S. Open Cup trophy and helping to keep them in the running for the Supporters Shield and MLS Cup. He was tremendous in his last U.S. appearance and was equally as (perhaps even more) tremendous in a marquee MLS matchup Friday night, scoring a brace in Sporting’s 2-0 win against the Chicago Fire.

Michael Parkhurst: While Parkhurst’s FC Nordsjælland lost 4-0 midweek to Chelsea in Champions League play, it was through no fault of the American defender. In fact, Parkhurst at times troubled the Champions of Europe down the right side, finding space and putting in dangerous crosses on more than one occasion. It’s an extension of the play he’s had in the Danish League.

He was pressed into duty in the Kingston conundrum, but Parkhurst was one of the few players who didn’t have a horrific match in the away qualifier. Steve Cherundolo appeared in his stead in Columbus, but it’s clear Jurgen Klinsmann is willing to take a chance on the former Wake Forest star if the occasion demands. Should Parkhurst keep up the play he showed against Chelsea, fans will be demanding he play more than a bit part.

Maurice Edu: The midfielder, like any player at the club, ended up with a rough go of things as Rangers collapsed around him. It took quite some time, but he landed in a somewhat comfortable spot with Stoke City; however, Edu hasn’t been able to adjust to the Premier League as quickly as he hoped.

Players at other positions might be able to sneak in to the U.S. side despite not seeing much league action. Not Edu. Defensive midfielder is one of the team's strengths, and with no game action it’s hard to imagine him getting back on the field for the Yanks any time soon.

Jose Torres: Klinsmann loves Torres, but the midfielder has been struggling in Liga MX play. While he did have a goal, he didn’t play a full match for Pachuca in September, with Hugo Sánchez electing to pull him out of three contests and employing him as a late sub in the final match of the month. October saw Torres return to the starting line-up, but we’re still waiting to see if he’ll have a return to the form that captured Klinsmann’s eye last season.