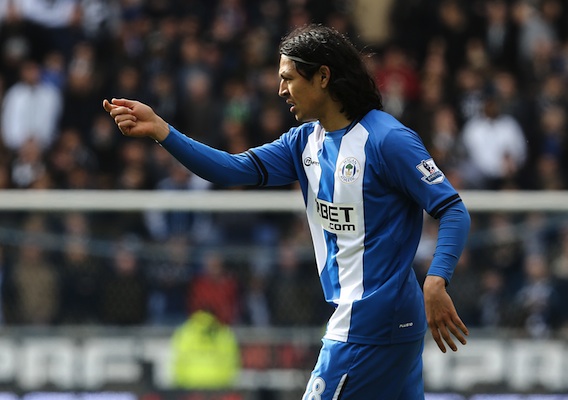 The former Major League Soccer midfielder and U.S. Open Cup winner plays a big role in his new squad's shocking cup triumph, while a few CONCACAF players figure in the Championship playoffs.
BY Jon Arnold Posted
May 14, 2013
12:00 PM
The five national teams the U.S. faces during the Hexagonal round of World Cup qualifying include players who play outside CONCACAF. You know how the Americans fared abroad each week, but what about the players they’ll be facing? We’ll keep you updated on their progress each week. Also, don’t forget to check out our section dedicated to all things Hex. We’ll focus first on the United States’ next Hex opponents:

You’ve probably seen this by now, but Watford advanced to the Championship Playoff final after a pretty unique moment. Lloyd Doyley was not on the pitch when that happened, being substituted in both legs of the semifinal against Leicester City. Leicester City actually own Jermaine Beckford’s rights, though he was on loan with Huddersfield Town from September. Now Bolton hopes to bring in the striker during the summer. Theo Robinson, a fellow Jamaican on loan at Huddersfield, may be sold this offseason by Derby County. Charlton released Ricardo Fuller. Jermaine Johnson’s contract is up as well. Sheffield Wednesday could be in to retain his services. No news on Marvin Elliott. Luton Shelton made his first Karabukspor appearance in more than a month, starting and being subbed out of a 2-1 loss to Sivasspor. Dane Richards went the full 90 as Bodo/Glimt got its second straight win in the Norwegian second division. Resident American Zarek Valentin missed out because of yellow card accumulation. Reading, which has Gareth McCleary, Adrian Mariappa, and Jobi McAnuff in its employ, play Manchester City today. Demar Phillips started for Aalesund in its 4-1 loss at Molde, but it didn’t go too well. He came out at halftime. Tremaine Stewart and Phillips didn’t play in Aalesund’s 7-1 romp over Lillestrom, but one of their CONCACAF teammates did. Keep reading to find out who! It’s in the Costa Rica section. Omar Daley was back on the Motherwell bench in a 2-0 win over Ross County. We’ll see if teammate and countryman Chris Humphrey gets a call up for the Reggae Boyz. He scored the second goal.

Rolando Escobar scored the only goal in a Deportivo Anzoategui victory against Trujillanos in Venezuela’s top division. Here are the full highlights, which just topped a dozen views as of this writing. Román Torres and Millonarios stayed in the top half of the Colombian league with a 2-2 draw at Deportivo Cali. Luis Henríquez missed Friday’s Lech Poznan match with a soleus muscle injury. Gabriel Gomez went the full 90 for Junior in a cup victory during the week and made a cameo in the league match. He entered a 2-1 loss to Deportes Tolima in the 72nd minute. Armando Cooper got into the last ten minutes of Godoy Cruz’s defeat at the hands of Newell’s Old Boys. He was booked halfway through his appearance.

Roger Espinoza played the entire FA Cup Final and got plaudits for his performance in the 1-0 Wigan win. The club is still in danger of relegation but will enjoy this triumph, which Espinoza called an incredible experience. Maynor Figueroa, the defender out because of a groin injury that ended his season, was reportedly unable to attend the match because of the start of his recovery. Also, The Daily Mail has him linked with an offseason move to West Ham. Osman Chavez hasn’t played since his sending off a fortnight ago. Enrique Izaguirre started and went 84 minutes in Celtic’s 4-0 win over St. Johnstone, which came just a week after this author accused the team of coasting. Coincidence? In the same league, Hibernian traveled to Hearts and got a 2-1 win. Jorge Claros went the distance. Andy Najar is probably happy to miss DC United’s struggles, but he still hasn’t appeared for Anderlecht. Luis Garrido started but played just 35 minutes for Red Star Belgrade, which won 1-0 Saturday. Carlo Costly and Veria’s season is over. Wilson Palacios didn’t feature for Stoke City in Sunday’s loss to Tottenham.

Keylor Navas continues on as Levante’s top netminder, again earning the start and the clean sheet despite being reduced to 10 men in the 53rd minute and nine in stoppage time. He also gave an interview to Costa Rican sports daily Al Día. They played up the fact that he watches telenovelas, but more shocking to me is that Adam Sandler is his favorite actor. He also prefers mowing the lawn and cleaning the house to taking out the trash. Fulham is taking a bit of a nose dive at the end of the Premier League season, a slump which Bryan Ruiz had been mostly immune from. He didn’t play his best in a 3-1 loss Sunday, but he did play 90 minutes. Bryan Oviedo got in on stoppage time for Everton while the Toffees put the finishing touches on a 2-0 win against West Ham. Joel Campbell didn’t enter Real Betis’ 1-0 topping of Celta de Vigo. Michael Barrantes scored for Aalesund in a 4-1 loss at Molde. He started the 7-1 win against Lillestrom and was subbed out in the latter stages of the match. Here are the highlights from the midweek match where you can see Barrantes’ long range effort get deflected into the goal. AIK went down for the first time this month. Celso Borges went the full 90 in midfield. Giancarlo Gonzalez went the full 90 in both Valerenga’s losses last week. He put one past American keeper Steve Clark to equalize the midweek match against Honefoss, but the visitors got the win. Diego Calvo didn’t appear in that match but started and played nearly all of a 1-0 loss to Haugesund. You can barely see Gonzalez’s goal, a corner headed into the ground and in, here: Christian Bolaños and Copenhagen played their second consecutive scoreless draw Sunday.

Chicharito scored to send off Sir Alex Ferguson as Manchester United topped Swansea, 2-1. Hernandez came off for Ryan Giggs in the 76th minute. Carlos Vela started and went 80 minutes for Real Sociedad in a draw with Granada, who snatched a point with a last-minute equalizer. A win would’ve put Sociedad in the Champions League places. Instead, sitting fourth is Valencia, for whom Andres Guardado played left back in a win against Rayo Vallecano. Guardado had an excellent match, assisting the second goal and scoring the third in the club’s second-straight 4-0 victory.
Of course, Barcelona clinched the Spanish title this weekend, which was made official when Hector Moreno and Espanyol stood tall and held Madrid to a 1-1 draw. Moreno went the full 90 at center back as usual. At the other end of the table, Gio dos Santos scored an amazing free kick goal in the 81st minute but it was too late for a rally and Mallorca lost to Athletic Bilbao by a 2-1 margin. Guillermo Ochoa was in goal for Ajaccio in its 1-0 loss to Troyes. Javier Aquino was booked in Villarreal’s 3-1 victory against Alcorcón. That’s not really that remarkable since there were 13 yellows issued in the match. Whose performance strikes the most fear in your heart? Have we missed any players who you think should be in the U.S.’ game tape rotation? Any information you’d like to see in future editions? Let us know in the comments section. Jon Arnold (@ArnoldcommaJon) is a writer based in Arizona and is ASN's CONCACAF correspondent.