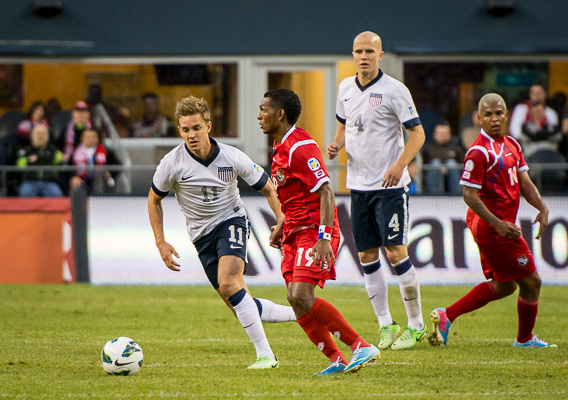 Stuart Holden’s cameo in Tuesday’s match in Seattle was so overshadowed that no reporters tried to talk to him as he left the locker room—except for us. Here's what he told ASN.
ASN Slideshow

BY Liviu Bird Posted
June 12, 2013
9:09 PM
SEATTLE—Quietly, Stuart Holden took another big step toward full fitness on Tuesday, coming on in stoppage time of the United States’ 2-0 win over Panama. It was his first competitive appearance for the U.S. since its 1-1 tie with England in World Cup 2010. That was also a stoppage-time appearance, just over three months after he suffered a broken leg in a friendly against the Netherlands. Since then, Holden has fractured a bone, injured his ACL, and contracted cartilage damage in his knee. He didn’t even register on the OPTA chalkboard Tuesday, but Holden said after the game that he feels ready to play at a high level once again. “In terms of my recovery, everything’s great,” he told American Soccer Now in the mixed zone at CenturyLink Field. “I’m itching to get in there and play a bigger part, but obviously, the team’s playing really well at the moment, and the guys in front of me have all been playing full seasons in their respective leagues. It’s just a matter of me picking that up.” The game in Seattle marked a return to the place where Holden made his international debut, scoring a goal on July 4, 2009, against Grenada in the CONCACAF Gold Cup. Four years later, it could be that same competition that puts Holden back on the map for the U.S. national team. “I think I really have a good chance in the Gold Cup to prove that I deserve a spot in the [starting] 11,” he said. “I want to make a big impression. It’s not a time for me to pick up speed. I think it’s a time for me to hit the ground running and really show that I’m back. I think I’ve shown that in training. I’ve been working hard every day. I think it was a good chance for the coaches to see where I’m at, and hopefully, they’ve been impressed by that.” He should be a lock for the Gold Cup roster, especially after appearing twice in the last four matches, including nine minutes in the 4-2 U.S. friendly loss to Belgium on May 29. Holden has remained optimistic throughout his injury troubles, taking every opportunity to claw his way back into his coaches’ minds. He wasn’t getting enough playing time at his English League Championship club, Bolton Wanderers, so he went on loan to Sheffield Wednesday in March, appearing four times and gaining match fitness. Throughout his recovery process, U.S. head coach Jurgen Klinsmann has remained in touch. When Holden could finally play without restrictions at the end of the English season, club and country officials decided he needed a full summer to return to 100 percent match fitness before August. “In terms of me being here, it was free rein,” Holden said. “They said I could play both tournaments, and in terms of training, I’ve been training every day. I haven’t missed a session. My fitness feels great.” When players return from serious injuries, the effects tend to linger. Whether it’s being a step slow or a tad weary of going into tough tackles, the mental restraints can last longer than the physical. Not for Holden. “It’s done,” he said. “I always tend to look ahead and look at the positives, and once you get over that and get back on the field, it’s about how you can improve and how you can keep getting better.” The U.S. opens its Gold Cup quest on July 9 against Belize, back in the Pacific Northwest at JELD-WEN Field in Portland, Ore. Should he start, it would be his first in a competitive match since a 2-2 tie on Oct. 14, 2009, that wrapped up qualification in the last World Cup cycle. “I felt better with every game [at Sheffield Wednesday], to the point where I felt like I could come into the training here and show well,” he said. “Altogether, I feel like I’m right there, knocking on the door.” Liviu Bird is a freelance journalist based in Seattle. He is also American Soccer Now’s resident tactical expert. Follow him on Twitter.