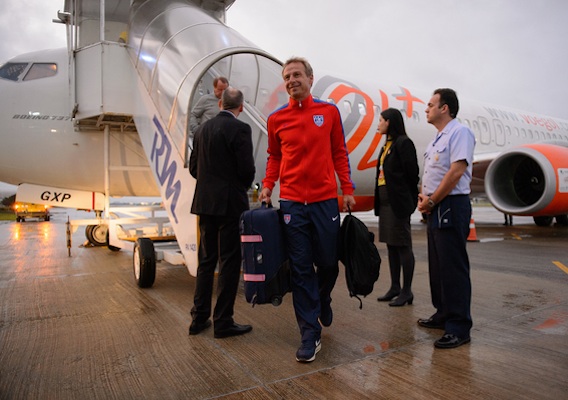 Reading Between the Lines

Here's What Klinsmann Said About Germany...

....and here's what ASN heard. With the biggest match of his tenure just a few days away, Klinsmann has a lot to say. John Godfrey's interpretations may shed some light on Klinsmann's commentaries.
BY John Godfrey Posted
June 25, 2014
10:19 AM

What Klinsmann said: “Good morning everybody. As I can see there are some people here that haven’t been here before, which is the nature of the Germany game. I just want to welcome everybody that hasn’t been here before to Sao Paulo FC’s training ground, which is a place for us, like a second home. I don’t know if you’ve had the chance to see it a little bit, but the facility is state of the art and very special. We feel privileged to be here at this place, at one of the biggest clubs in South America and they treat us tremendously and give us a lot of energy over the last couple of weeks. We have been here in January already to test things out. It’s been an awesome experience for all of us. So, I welcome you to Sao Paulo FC. What we heard: Oh, great. Fresh meat. Which means another half-dozen questions about whether I'm going to call Jogi and arrange a tie. Maybe I can distract them by going on and on about the training facilities....

On pre-arranging a draw with Germany to secure advancing:

What Klinsmann said: “I don’t think we are made for draws, except if it happens like tonight – a late goal in the last seconds. I think both [the USA and Germany] want to win the group. We want to go into this game, recover fast and go at Germany, get three points and have seven points on our side and be in the driver’s seat for the Round of 16. That is our goal. It’s a little bit more difficult now after that second goal [given up to Portugal], we would be through already, which maybe some people didn’t expect so much before the tournament, but I’m sure that in four days we are going to see a very exciting match in Recife. I think there’s coming a lot of respect now from our opponents since we started this tournament. We’ll do everything now to get recovery time for the players, get back to our base hotel—they’re going to see their families. In two days from now we’re going to Recife and prepare for that match.” What we heard: I guess my little ploy didn't work. Oh well. Hopefully this longwinded answer will satisfy them.


On pre-arranging a draw with Germany to secure advancing, part 2:

What Klinsmann said: "The United States is known to give everything they have in every single game. If you look at the past, we made things happen, otherwise Mexico wouldn’t be here or that last World Cup when we did the same thing with a team that went into the World Cup. We have that fighting spirit and that energy, that determination to do well in every single game. So, we’re going to go into Recife very ambitious with a lot of confidence to beat Germany. This is our goal. Then we’ll see what happens on the field. I’m actually pretty confident that we’re going to get a good game there.” What we heard: So annoying! Move along, you kittens!


On pre-arranging a draw with Germany to secure advancing, part 3

What Klinsmann said: "“Well, the message is very simple: we want to beat Germany. We want to be first in our group, so we’re not thinking about a tie. We know a tie gets us through too, which if at the end of the day it ends up a tie because it’s an exciting game and a very close game, so be it. What we heard: For the last time, I'm not going to call Jogi! [pause] I'm going to text him.


On the team’s performance against Portugal

What Klinsmann said: “I think we can all be very proud of the performance of the team against Portugal. We knew it was going to be a very difficult game, it was going to be challenging to block their great, individual players that they have, but I think that once we got slowly into the game, after 15-25 minutes, we kind of swallowed the first goal that we conceded there. The response was tremendous and we pointed it out at halftime that if you keep the tempo high, if you move the ball around quickly, you will create chances, which we already had in the first half. Then we created even more chances in the second half and eventually we scored the goals." What we heard: We kicked their asses.

What Klinsmann said: "I think Michael Bradley got caught in the middle of three or four guys and lost the ball, unfortunately. Then the counter break comes and even if we had in this moment three center backs on the field, we were not able to get to that cross, which was a beautiful cross and so they finished it off.” What we heard: If Michael had only....no. Let it go. Cleansing breath. Next question!

What Klinsmann said: "Just obviously a bummer if you concede a goal in the last second, which would have qualified you already for the Round of 16. But overall a very, very positive step into the right direction.” What we heard: It was a sheisse sandwich.


On preparedness for Germany

What Klinsmann said: "Yesterday, already, [the players] were out on the training field, and they’ve already recovered from the game, and they’re looking forward to this. This is the biggest game they can ever play, you know, because now it’s about points in the knockout stage. So we are ready for that. Schedule wise, you mentioned something about the game: It is what it is." What we heard: I've been beating the crap out of these guys for almost three years, telling them to stop playing X-Box and run; stop drinking Budweiser and have a glass of water; stop Instagram-ing and go to the gym. On Thursday we find out if they listened to me.


On the shorter turnaround and extra travel

What Klinsmann said: "Jozy is recovering really well. He’s doing a tremendous job. Our medical staff is on top of it. This game comes still till too early for him, but we’re working on getting him back in this tournament as we said, so once this game is hopefully done successfully we’ll have a good chance to have him back in the team." What we heard: He's done.


On the play of Matt Besler

JK: “It is just fun to watch Matt. He’s one of our most promising center backs that we’ve brought along here the last two-and-a-half years. This is something that hasn’t just happened in five weeks, it’s been three years since we’ve been working on this puzzle, on the team, on the players to make them understand what it takes to perform on the level of a World Cup. When you see Matt Besler coming through and breaking through and going through pain and still keeps his composure and his focus and there were many positive things on the field. For a coach this is very rewarding when you see things coming alive in a tournament like this, but that’s also because we’ve been working on these things for three years.” What we heard: He needs to get his ass out of Major League Soccer, and with the performances he's had so far, I bet he will.


On what it means for him to play against Germany

What Klinsmann said: “It’s very special, it’s something that doesn’t happen every year and probably not anymore in the lifetime, so you try to enjoy this moment. I’m looking forward to seeing all of them. The staff is pretty much the same as I left it, when I stepped out in 2006. It’s gonna be emotional, there’s no doubt about it. I will give them big hugs before the game and then leave to the side. We’re gonna get the job done and we’re gonna give a farewell hug again after the game.”

What we heard: After we win I'm going to find Phillipp Lahm, hand him a copy of his own book, and ask him to sign it for me. That's what John Godfrey heard. What did you hear?