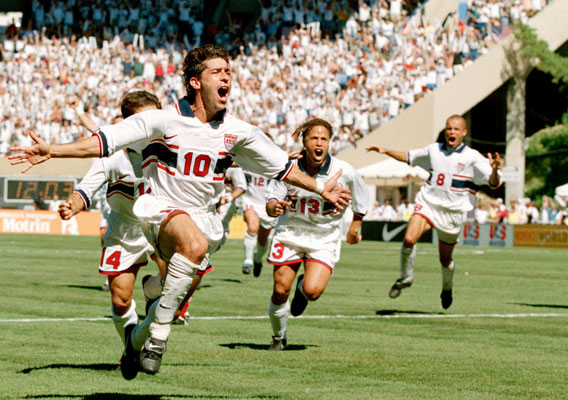 Who Are the Best Foreign-Born U.S. Soccer Players?

Some of America’s greatest soccer talent grew up abroad, so Daryl Grove crunched the numbers, scoured the record books, and hereby proposes that these five guys are the best.
BY Daryl Grove Posted
January 08, 2013
9:35 AM
Editors note: This is the first in a new American Soccer Now series called High Five.

Although injury robbed the curly-haired, El Salvadoran-born playmaker of his rightful place at the 1990 World Cup, and age had caught up with him by the time he played 66 minutes against Brazil in 1994, Perez is arguably the finest flair player ever to represent the United States. YouTube features enough footage of Perez’ feints, step-overs, and hip-swivels from the late 1980s to make the case that he is America’s most naturally gifted No. 10. And if Perez was playing today, we’d probably build the whole team around him.
Born: Morazán, El Salvador
Position: Playmaker
USMNT: 73 caps / 16 goals (1984-1994)
World Cups: 1994 (briefly)

The son of a U.S. Air Force airman stationed in the Netherlands, Stewart was born and raised in the land of windmills but made his patriotic pop proud by wearing the red, white, and blue. Comfortable in central or wide midfield, as well as up top, Stewart provided the U.S. with searing pace, clever runs, and an eye for goal at three World Cups. In 1994 he darted onto a Tab Ramos chip against Colombia to score the goal that ultimately got the U.S. out of the group stage. Stewart spent his best years in the Eredivisie, but found time before retiring to come over and win an MLS Cup with DC United in 2004.
Born: Veghel, Netherlands
Position: Midfielder
USMNT: 101 caps; 7 goals (1990-2004)
World Cups: 1994, 1998, 2002

FIFA’s nationality laws were a little more lax in 1950. So while the Haitian-born Gaetjens never actually became an American citizen, he did submit “First Papers” (the first step toward citizenship) in 1950, making the Brookhattan striker eligible for the USA’s trip to the 1950 World Cup in Brazil. There, his acrobatic diving header stunned self-appointed best-team-in-the-world England as the USA won 1-0 in Belo Horizonte. Gaetjens only played three times for the United States and that was his only goal, but every USMNT fan knows the name—and the legend—of Gaetjens.
Born: Port-au-Prince, Haiti
Position: Striker
USMNT: 3 caps / 1 goal (1950)
World Cups: 1950

As the German-born son of a U.S. serviceman, tough-tackling midfielder Dooley was always U.S.-eligible. But Dooley had never met his father, didn’t speak English, and was too busy winning the Bundesliga to think about Stars and Stripes. Until, in Dooley’s own words, the U.S. Soccer Federation, “saw that 'Dooley' was not a German name and they came to ask more questions.” A trip to Chicago followed and the rest is right there in the record books: 81 caps, countless tackles, and Dooley even captained the American squad at the 1998 World Cup.
Born: Bechhofen, West Germany
Position: Defensive-midfielder/defender (and briefly, inadvisably, libero)
USMNT: 81 caps / 7 goals (1992-1999)
World Cups: 1994, 1998

When the Ramos family left Uruguay for northern New Jersey in 1977, 11-year-old Tabaré asked his parents, “Why, of all the countries in the world, did we have to move to the one where they don’t play soccer?” Tab would eventually help change that perception. He played for the U.S. in three World Cups (starting every game in 1990 and 1994), displaying a comfort in possession that defied early ’90s stereotypes about American soccer players. In 1994 Brazil decided the only way to stop Ramos was with Leonardo’s elbow. Just as importantly, Ramos gave Major League Soccer some much-needed legitimacy in 1995, becoming the league’s first-ever signing with a simple handshake deal.
Born: Montevideo, Uruguay
Position: Attacking midfielder
USMNT: 81 caps/8 goals (1988-2000)
World Cups: 1990, 1994, 1998 JUST MISSED OUT: Jeff Agoos (Switzerland), Preki (Yugoslavia), Roy Wegerle (South Africa). And though the current crop of German-Americans (plus Scottish-born Stuart Holden) are yet to leave their mark on a major tournament, you could conceivably see names like Fabian Johnson and Timmy Chandler on this list by late 2014. OK, this is where you come in. Who did we leave out? Who should we have excluded? We want to hear your take, so be sure to leave it in the comments section below. Daryl Grove is co-host of the Total Soccer Show, "the podcast for intelligent American soccer fans."