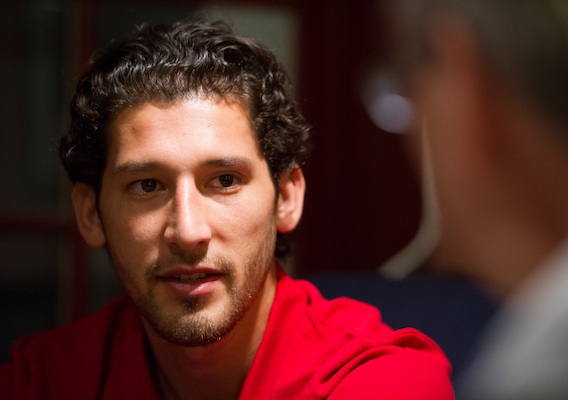 Herc on the Clippers; Stu on FIFA; Omar on Rattlesnakes

Give a professional athlete a phone and a Twitter account, and he's bound to do something shareworthy. That's why ASN's Justin Churchill gathers and ranks the Top 10 U.S. national team tweets of the week.
BY Justin Churchill Posted
April 28, 2014
11:23 AM

Gyau made his Bundesliga debut for Hoffenheim yesterday—yes, it's kind of a big deal.

This says it all.

Leave it to the Clippers to remind me of how grateful I am to be a a Lakers fan. #DonaldSterling #FacePalm

The tech on the @shelveyJ strike was silly!

Jack Handey has nothing on Matt Besler.

For the rest of your life, would you rather take a cold shower every single time, or take away 20 minutes of sleep every single night?

Is any American soccer fan not rooting for this guy?

Big win for the U-21's over Tijuana this week.

Good work to the #usmntu21 for getting that win! #homies #USA

there's only 1 rattlesnake @magee9 and it's in my pants “2 legends @sydneyleroux just chillen nothin to worry about. pic.twitter.com/I6G7e8GcCy”

This is why you can't rent a car until you're 25 years old.

This says it all.

Condolences to the family of a @SonsofBen original Eric Shertz! Always with us and never forgotten! @PhilaUnion family!

Perhaps Holden can change from within, post-playing career....?

Qatar scaling back stadiums for 2022? Wasn't that part of their bid? I will never understand how @ussoccer lost that one……………