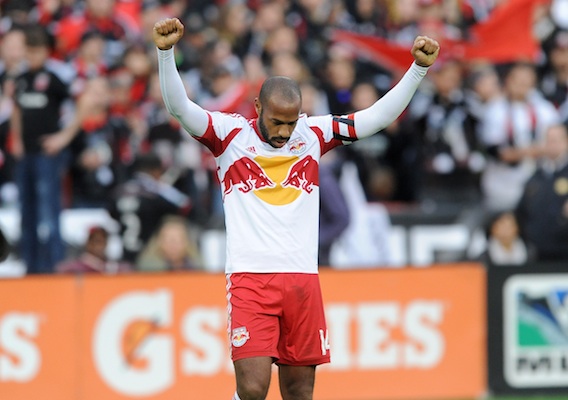 The Seattle Sounders academy is soaring at the GA Cup, Thierry Henry might return to the Red Bulls although it remains a big question which role he would have, Duane Holmes is the latest injured American abroad, and Hannover wants to keep Sebastian Soto around. ASN's Brian Sciaretta breaks down the news for Thursday.
BY Brian Sciaretta Posted
April 18, 2019
6:00 AM
THE EASTER WEEKEND is nearly here and there is plenty of news to sort through despite not many midweek games that affect American soccer.

Here are some of the top stories.

Henry to return to RBNY?


On Tuesday, there was a Sky Sports report about the possibility of Thierry Henry returning to the Red Bulls. The report suggests that the former French national team and Arsenal legend who had a strong tenure with the Red Bulls at the tail end of his career from 2010-2014 would come on as a head coach to replace Chris Armas.

The Red Bulls are off to a slow start to the season under Chris Armas and Henry was fired by Monaco earlier in the season in what was his first managerial stint.


Veteran soccer journalist Michael Lewis later added that the interest was to bring Henry back “in some capacity" including as the coach. While Sam Stejskal said that the rumor of Henry replacing Armas are “not real” although nothing suggests Henry couldn’t be brought back for another opening – such as academy director or assistant coach.

After serving as an assistant coach for the Belgian national team, Henry accepted an offer to coach Monaco which was off to a slow start in France.

Henry’s tenure at Monaco began on October 11, 2018 and was ugly. He managed just four wins, five draws, and 11 losses before being fired on January 24, 2019. Afterward, there were reports that Henry’s training sessions were often overly hands-on and chaotic.


Aleksandr Golovin on Thierry Henry: "He'd get frustrated with players in training & become abusive. He'd come out & show us how to play then get even angrier & start playing himself 'take the ball off me' he’d scream."

"You could tell he didn’t transition into the manager role." pic.twitter.com/fJ3goOc6MJ

But Henry is still a popular figure in New York perhaps it would off an opportunity for him to work out of the intense media spotlight of Europe but also in a place where the players would have tremendous respect for him.

The Red Bulls academy has not had an academy-head since last year but has had success in the past in developing first-team players and players that would later move to Europe.

It remains to be seen about what roles would be potentially open for Henry but it is perfectly understandable why the Red Bulls would want him back.

Soto to get new Hannover deal


There are a lot of changes going on right now at Hannover 96 which is mired in a historically-bad season in the Bundesliga (it is currently one of three teams to have a -40 seasonal goal differential since East and West Germany united and with five games remaining, it could pass the other two).

The club recently hired Jan Schlaudraff as its new sporting director and one of his first acts is to sign U.S. U-20 forward Sebastian Soto to a new deal. Soto joined Hannover last summer and was impressive for the club’s U-19 team during the season. He made his Bundesliga debut two weeks ago with a late cameo in a loss to Wolfsburg and made another late appearance last weekend in a loss to Borussia Monchengladbach.


According to this @BILD_Hannover report, Hannover 96's new sporting director Jan Schlaudraff is planning on finalizing a new deal with U.S U-20 forward Sebastian Soto as the club prepares for next season in the 2.Bundesliga. https://t.co/hMFxJ4hUEE

While not formally relegated yet, Hannover 96 will almost certainly be playing next season in the 2.Bundesliga. A new contract is a promising step for Soto but the club’s decision as to its next head coach will also be important for Soto as Hannover will hope to be part of a promotional campaign next year.


A lot of Americans based abroad are hurt at the moment as Weston McKennie, Christian Pulsic, and Tyler Adams have all been missing for at least the past two weeks.

Now you can add Duane Holmes to the list. The Derby County attacking midfielder has missed the past two games for Derby County and will miss at least two more due to a thigh injury. Derby manager Frank Lampard announced the news on Wednesday.


Lampard confirms that @DuaneHolmes is suffering with a thigh injury, and will be unavailable for the next two games, at least.

That’s all from the boss for now, there will be more build-up to #BCFCvDCFC soon... ???? pic.twitter.com/gGyxWF9Y64

It is tough news for Derby as the club is trying to climb back into the promotional playoff positions in the Championship. Derby currently sits in eighth place but is only two points out of sixth for the playoff positions.


The GA Cup has been taking place all week in Dallas which pits some of the best U-17 youth teams from here in the United States and across the globe. The Champions Division had four groups of four teams with the top two teams qualifying for the quarterfinal round of the knockout stages.

On Tuesday night, one U.S. team qualified for the semifinal when the Seattle Sounders academy team defeated a strong River Plate team 1-0 in extra time. The young Sounders will next face West Ham on Thursday in the semifinal.

The winning goal against River Plate was scored by Alfonso Ocampo-Chavez who is also a member of the United States U-17 national team (and U.S. U-17 head coach Raphael Wicky has been in Dallas this week). But Seattle’s success so far at the GA Cup has been built on the five players who have been part of the club’s USL team, the Tacoma Defiance. Ray Serrano Lopez, Joshua Atencio, Daniel Robles, Alfonso Ocampo-Chavez and recent first-team signing Danny Leyva have all have been earning professional minutes with the USL and it is clear that experience has paid off.

The big test will now take place against West Ham with a berth in the final on the line.