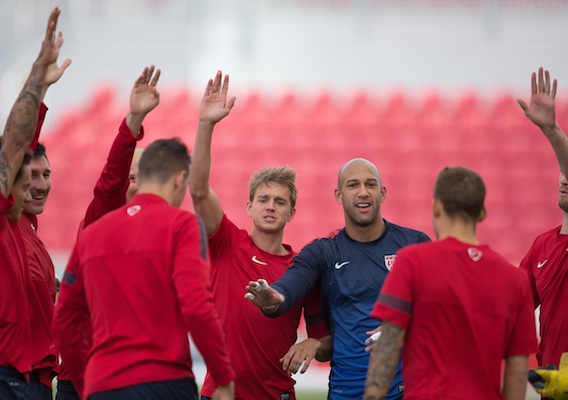 Hands Up! Who Wants to Start Against Honduras?

DaMarcus Beasley is suspended. Geoff Cameron doesn't have a set position. Landon Donovan is on the beach. So who should Jurgen Klinsmann start against Honduras Tuesday night?
BY John Godfrey Posted
June 14, 2013
1:43 PM
Back to front, here is one man's take on the roster issues facing the United States in its third and final June World Cup qualifier. GOALKEEPER
Tim Howard is the No. 1 American backstop. I get it. And he has earned the right to the label. But is he any better than Brad Guzan? Or is he just the incumbent? Deep in the bowels of Estadio Azteca, I asked Jurgen Klinsmann about Guzan’s tremendous performance against Mexico on March 26, where El Tri sent 17 shots in his direction. None, incidentally, got past big Brad—much to the chagrin of the 85,500 in attendance. "Brad’s performance was huge," Klinsmann said at the time. "He stepped it up. Great communication. He was very vocal. He gave them a lot of confidence throughout the whole last 10 days. He made it clear that if anything happens to Tim, [he’s] more than a No. 2." More than a No. 2, but less, apparently, than a No. 1. Fair enough. But a question lingers: Does Guzan deserve a shot against Honduras on Tuesday? The U.S. has secured six points. There is no meaningful drop-off in quality between Howard and Guzan. If, as Klinsmann said, Guzan is more than a No. 2, shouldn’t he get a chance to prove it in another Hex match? I would love to see it. DEFENSE
This is a bit more complicated. The U.S. backline gave up seven goals in two friendlies leading up to the three June World Cup qualifiers. Yes, the exhibitions were against two tremendous teams in Belgium and Germany, but still—that’s just awful. Then again, as Klinsmann said after the Belgium match, getting spanked by better teams is a great way to expose your flaws. “There’s a lot we can learn from these opponents,” Klinsmann said. “This is why we play teams like Belgium, like Germany, like Russia or like Italy, because there’s so much that you can read from those games. Obviously you want to win them and when you lose them it’s not such a big pleasure, but I’d rather play Belgium 10 more times than El Salvador 100 times because that’s where you learn.” So, Klinsmann learned a few things in these matches and responded accordingly: