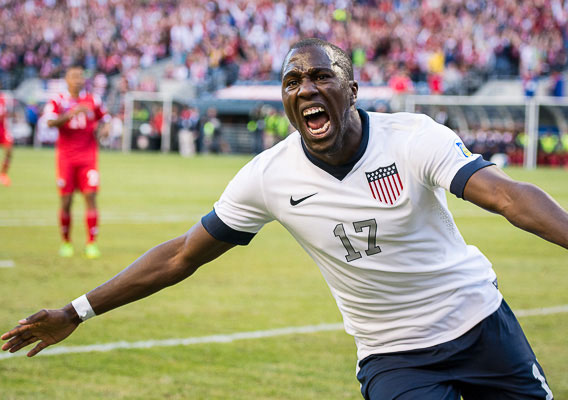 Despite a missed penalty call and a pitch that gave both sides fits, the United States took a 1-0 lead on a beautiful sequence authored by Michael Bradley and punctuated by Jozy Altidore.
ASN Slideshow

BY Jon Arnold Posted
June 11, 2013
11:02 PM
SEATTLE - A 36th-minute move from the United States that culminated in a Jozy Altidore tap in has the home team leading 1-0 at halftime. The goal drew a boisterous reaction from the crowd at CentruyLink Stadium, shaking the press box with the jubilation after the goal. The halftime joy nearly turned into melancholy with Panama ruled offside on a play when the ball ended up in Tim Howard’s net before the whistle. Howard started the match positively when he dealt with an early Panama shot and started the U.S. attack. Clint Dempsey nearly pulled off a marvelous bit of skill for a dream start but couldn’t bring Fabian Johnson’s pass under control. Two minutes later, a long throw in led to a Johnson shot that went just over the bar into the CenturyLink Field crowd. Another chance came with a similar result early in the seventh minute. DaMarcus Beasley came forward from left back and put in a cross. It deflected off a player in the box and fell in Dempsey’s vicinity. The captain tried to direct it toward goal but also put it over. The grass surface over the artificial turf, much maligned during the week, held up for all of 10 minutes before players began to lose their footing. In the 22nd minute Brad Evans was victimize, a concerning theme of the opening act, but the surface came to his rescue, sending Carlos Rodriguez tumbling and killing off the attack. Evans and Eddie Johnson tried to partner on the right side, but you wouldn’t guess they were teammates. At one point, Johnson started a run, then stopped when he realized the ball wasn’t there. Evans overcorrected and sent the ball into touch. Panama’s brightest opportunity besides the disallowed goal came in the 17th minute when Evans was caught out of position and midfielder Alberto Quintero bested him on the wing to get free. Fortunately for the U.S., his cross was over-hit and dealt with by Howard. The Americans were their own undoing in the 22nd minute. Michael Bradley surged through a field of Panamanians and got the ball to Fabian Johnson. Johnson put in a ball that was poorly cleared by Roman Torres and fell to Bradley for what would’ve been a certain goal were it not for teammate Dempsey in the path of the ball. There was a penalty shout in the 28th minute when Dempsey got a shove from Felipe Baloy in the box and went to the ground. Mexican referee Roberto Garcia wasn’t interested in blowing his whistle. Two minutes later he looked upon a spill by Quintero even less kindly, giving a clear verbal warning to the player as he looked up from the moist grass. A far stronger shout came when Torres brought Altidore down in the box in 34th minute. Altidore held off his defender, turned and headed toward goal. Torres appeared to shove the forward to the ground, but Garcia awarded a free kick to Panama. It was something of a moot point a few minutes later when Bradley played an excellent ball to Fabian Johnson on the wing. Johnson had plenty of space and was able to put in a ball right between the keeper and the back line where Altidore put it home with his right foot. Bradley did almost everything right in the first half with the only complaint being a 42nd minute rocket from his left foot that he couldn’t put on target. Check back for more after the game.