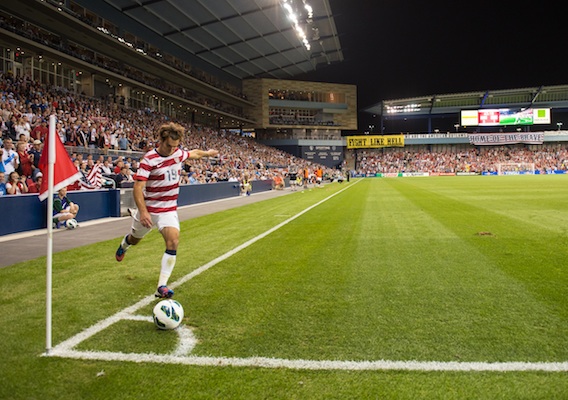 The Sporting KC midfielder demonstrates precisely why he is ranked 11th in the ASN 100, while Alejandro Bedoya, Andrew Wooten, and Aron Johannsson make a push to catch Jurgen Klinsmann's eye.
BY Josh Deaver Posted
May 06, 2013
11:31 AM
Graham Zusi—ASN rank #11
During Sporting KC’s 4-0 dismantling of Chivas USA, Zusi showed once again why he is one of the top American talents in MLS. Zusi was instrumental in the first three goals for the home side before being subbed off in the 68th minute. Just before halftime Zusi capitalized on a poor defensive sequence by the Goats and was able to set up Claudio Bieler with his league-leading fourth assist of the year. After the break, a perfectly weighted pass from Zusi set up a 1v1 opportunity for Paulo Nagamura, who successfully drew a penalty that was converted by Bieler in the 57th minute. Eight minutes later, Zusi added a tally of his own by slamming home Josh Gardener’s near-post. The win puts SKC atop the Eastern conference table with 17 points. Jose Torres—ASN rank #24
“El Gringo” once again got the start for Tigres on Saturday, playing 90 minutes and picking up a yellow card in a 2-0 win over Club America. With the win the club locks up the top spot in the Liga MX Linguilla playoffs and will face CONCACAF Champions League winners Monterrey in the tournament’s opening match. Torres has started 15 of 17 matches during the Clasura campaign, quietly putting together a quality year. With this run of form, he will certainly be in contention for a national team camp invitation later this month. Stuart Holden—ASN rank #31
Thirty months since his last appearance, Stuart Holden is now set to return to the U.S. men’s national team. U.S. Soccer announced on Friday that Holden, who has featured for Bolton and Sheffield Wednesday in the English Championship this season, will participate in the upcoming training camp—convening at the end of May—in preparation for World Cup qualifiers and will also receive an invite to take part in July’s Gold Cup tournament. Edgar Castilo—ASN rank #34
Castillo received the start and played 90 minutes for Club Tijuana in its 4-0 victory over Chivas Guadalajara on Friday night. Castillo played well, picking up an assist on the Xolos’ second goal with an excellent run and well-timed pass. Despite the emphatic win, the Xolos failed to qualify for the Liga MX playoffs after winning the Apertura title in 2012. Fellow American Joe Corona (ASN #28) played 14 minutes in the win. Luis Gil—ASN rank #43
With the U-20 World Cup on the horizon, Luis Gil is continuing to show why he is an integral pat of Tab Ramos’ roster. While several U-20 players are currently playing in MLS, Gil is an established starter with Real Salt Lake, playing big minutes since first cracking the lineup in 2011. In Saturday’s 2-0 win over Vancouver Gil notched his second goal of the season—matching his personal best mark for a season. Getting free on a breakaway, Gil received a perfectly placed cross from Joao Plata and converted with a downward header. Eric Lichaj—ASN rank #45
Lichaj saw his first league action since January, playing 63 minutes in Aston Villa’s 2-1 victory over Norwich City on Saturday. Lichaj has struggled to secure playing time this season but was called into action for the Villains after a first-half injury to regular right back Matthew Lowton. Alejandro Bedoya—ASN rank #46
Bedoya put in another excellent shift over the weekend, playing 90 minutes and scoring the winning goal for Helsingborg in a 1-0 victory against Syrianska FC. Receiving the ball inside the box, Bedoya slipped his marker and slotted a powerful left footed strike across his body and into the top corner. The goal, his fifth in all competitions, lifted the club to the top of the Swedish table while extending its winning streak to four matches. The 26-year-old has already surpassed his scoring output from previous years and is making a compelling argument for the U.S. national team this summer. C.J Sapong—ASN rank #49
Sporting Kansas City striker C.J Sapong picked up his first goal of the season during Saturday’s 4-0 win over Chivas USA. Sapong, a second-half substitute, was left completely unmarked in the box in the 87th minute and converted a Mechack Jerome cross with a confident side-footed volley. The strike was Sapong’s first league goal since October 2012. Aron Johannsson—ASN rank #57
With Jozy Altidore likely to leave in the offseason, AZ Alkmaar look to have found a suitable replacement in Johannsson. In a 4-0 victory over Zwolle on the weekend, the Icelandic-American came on for Altidore in the 60th minute and scored his third goal of the season just two minutes later. After scoring at a torrid pace for Danish side Aarhus—14 goals in 18 appearances in 2012—Johannsson already has three goals in 105 total minutes for Alkmaar. Tim Ream—ASN rank #82
Out of the Bolton lineup since February, Ream received a surprising start on Saturday, playing 90 minutes for the club in its season-ending clash with Blackpool. Ream did not receive good reviews for his performance, and the Wanderers could only manage a 2-2 tie. As a result, the squad missed out on the Championship playoffs and will return to England’s second tier next season. Andrew Wooten—ASN rank #90
With the German season winding down, Wooten continues to impress. Against Ingolstadt on Saturday, the former U-23 striker picked up two second-half goals, propelling Sandhausen to the 3-1 win. The goals bring his total to seven in 26 league appearances this campaign. On loan from Kaiserslautern, Wooten has featured consistently for the relegation-bound club and has established himself as a legitimate scoring threat. Feeling upbeat about how Americans are performing at home and overseas? Which players have earned a shot at playing time this summer? Share your thoughts in the Comments below. Josh Deaver is a former academic turned soccer obsessive. Follow him on Twitter, @USFootballGuy, for daily updates.