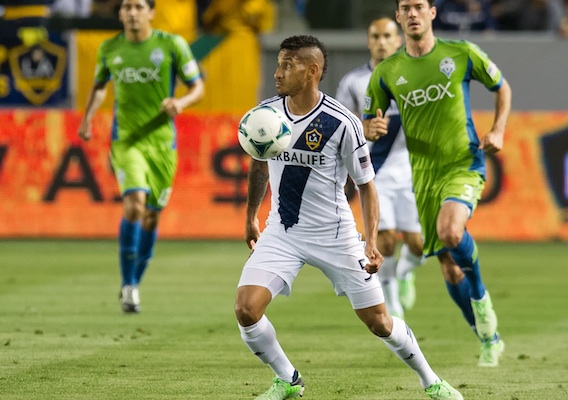 Hoffenheim stays in the Teutonic top tier. Boyd scores yet again. McInerney makes his case for U.S. national team consideration. Updates, videos and more from these and other stories.
BY Josh Deaver Posted
May 28, 2013
4:00 PM
Michael Bradley—ASN rank #1
Bradley completed his first season with AS Roma on Sunday, playing 90 minutes in the club’s 1-0 loss to Lazio in the Coppa Italia final. With the loss, Roma finishes just outside Europa League qualification and will not participate in European competition next season. Despite a disappointing finish, Bradley put together a strong campaign, making 30 appearances and scoring one goal in his first season in Rome. Reports indicate there has been interest from other clubs in acquiring Bradley’s service via loan, but so far the club has rebuffed all efforts.
Fabian Johnson—ASN rank #7
After capping its Bundesliga season with a relegation-saving win against Borussia Dortmund, Hoffenheim completed the great escape this week, defeating Kaiserslautern in a two-leg promotion playoff to remain in the German top flight. The club finished with a 5-2 aggregate advantage, winning 3-1 at home on Thursday and 2-1 away on Monday. Johnson started both matches in left midfield, playing 90 minutes in each win. With another Bundesliga season confirmed, Johnson and Danny Williams will now travel to meet the U.S. national team in time for a friendly match against Germany on June 2nd. Terrence Boyd—ASN rank #14
Terrence Boyd finished up his debut season with Rapid Vienna on Sunday, playing 90 minutes and scoring his 17th goal in all competitions during a 3-0 victory over Ried. In the 88th minute, Boyd got past his marker, taking an initial touch with his head before finding the back of the net with a well-taken strike. The goal capped off an impressive campaign from Boyd, who made 30 appearances for the club while finishing sixth in league scoring with 13 tallies overall. In spite of some struggles, including an eight match winless streak and fan protests, Rapid finished third in the league and will compete in the Europa League again next year. Josh Gatt—ASN rank #29
In what can only be described as a nightmare start from the two-time defending Norwegian champions, Molde are beginning to show signs of life. With a 4-0 win over Honefoss on Saturday, only its second win in 12 matches, the club is officially out of last place in the Eliteserien table. Josh Gatt got the start in the match, playing 59 minutes and picking up an assist on a long-range blast from Magnus Wolff Eikrem in the 51st minute. The club will take on Hodd in Norwegian Cup action on Wednesday prior to the international break. The Eliteserien will return to action on June 22. Jack McInerney—ASN rank #33
The Philadelphia Union forward found the back of the net yet again this weekend, picking up his ninth goal of the season in a 5-3 loss to Montreal Impact. After conceding early, McInerney pulled the Union level in the fifth minute off an assist from Micahel Farfan (ASN #100). Receiving a pass on the left side of goal, the 20-year old buried his chance to seemingly pull away in the race for the MLS Golden Boot. However, thanks to a first half hat trick from 37-year old Impact striker Marco Di Vaio, both players are now deadlocked atop the standings. Edgar Castillo—ASN rank #34
Castillo, Joe Corona and Club Tijuana suffered a setback in their Copa Liberatadores dream run on Thursday, conceding a late equalizer at home to Brazilian side Athletico Minero in a 2-2 draw. The Xolos seemed in control for a majority of the match, but some late lapses saw a 2-0 lead evaporate. As the lone Mexican representatives in the tournament, the Xolos will travel to Brazil on Thursday needing an outright win to advance to the semi-finals of the famed tournament. Castillo got the start in the first leg, playing 90 minutes. Joe Corona came off the bench, putting in a 27-minute shift in the draw. Juan Agudelo—ASN rank #36
In his second game with New England Revolution, Agudelo played 90 minutes and picked up a his first goal during a 2-0 victory over Toronto FC. The goal came deep into stoppage time for the Revs when Agudelo converted near post on a pass from Saer Sene inside the box. With his third tally of the year, Agudelo seems to be on the right track after some initial setbacks. With increased playing time in New England, Agudelo could be poised for his best season yet in MLS. Eric Lichaj—ASN rank #45
After a disappointing season, it was reported this week that Eric Lichaj will not return to Aston Villa in the English Premier League next season. Since recovering from a series on injuries the last two years, the 24-year old has failed to find a regular spot with the Villains, making only 17 appearances this campaign, with only three of those coming in 2013. Despite his recent performances, Lichaj is likely to catch on somewhere. While options in England remain likely, there also appears to be interest from MLS. Joe Gyau—ASN rank #66
Joe Gyau will rejoin Fabian Johnson, Danny Williams, and Hoffenheim in the Bundesliga next season. After spending a year on loan with German second division side St Pauli, the club declined its option to buy out the 20-year old’s contract. Gyau made 15 appearances for St Pauli this campaign, notching two appearances and a goal for the club’s fourth division side as well. QUICK NOTES:
Brad Davis—ASN rank #35 netted his third goal of the year in an entertaining 1-1 draw with Sporting KC on Saturday. Will Bruin (ASN #48) delivered the assist after some strong holdup play. Sean Franklin—ASN rank #75 scored the opening goal in LA Galaxy’s 4-0 thrashing of Seattle Sounders on Sunday night, tapping in a Robbie Keane pass in the 12th minute. strong>Freddy Adu—ASN rank #73 made his Brazilian Serie A debut for Bahia on Sunday night, playing seven minutes in a 3-1 season-opening loss to Criciuma. Josh Deaver is a former academic turned soccer obsessive. Follow him on Twitter, @USFootballGuy.