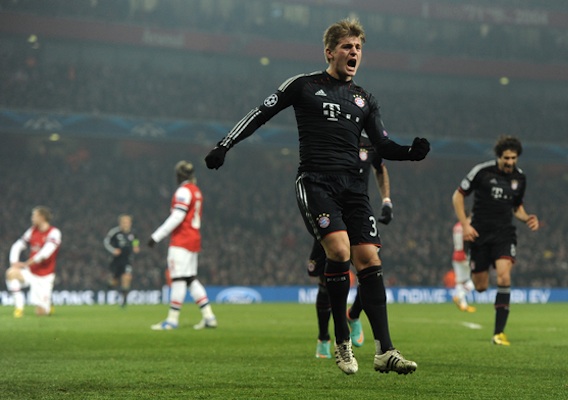 Goals Galore for the Boys From Bayern Munich

It's a good thing the United States won't be playing Pep Guardiola's men in the World Cup because, boy, are those guys good. And Kwadwo Asamoah ain't too bad, either.
BY Blake Thomsen Posted
February 26, 2014
2:37 PM
It was a big week for Germans, especially those who play for Bayern Munich, while Ghana and Portugal had relatively quiet weeks. Here, ASN gives you everything you need to know. (For the full 360-degree view, including player profiles, historical context, and tactical analysis, be sure to check out our Brazil 2014 channel.)

As expected, German stars played huge roles in Bayern’s 2-0 win at Arsenal in the Champions League. First, Arsenal’s Mesut Ozil continued to be really bad at penalties, seeing his tame effort saved by current national team and former childhood teammate Manuel Neuer. The German number one may be the world’s best penalty saver—if the U.S. draws a penalty against the Germans in Brazil, whoever takes it will need to produce a top effort to beat Neuer.
Next it was on to the German goal scorers. Toni Kroos broke the deadlock with an absolute stunner that flew into the top corner, giving Lukasz Fabianski no chance in the Arsenal goal.
Kroos’ long shooting may be his best asset, and it could help land him a starting role next to Bastian Schweinsteiger in the center of the German midfield. The clinical Thomas Muller sealed the game (and probably the tie) with a classic header in the 87th minute, assisted by another German, Philipp Lahm.
Muller’s fine week was not done yet, however, as he scored two more times in Bayern’s 4-0 romp at Hannover over the weekend. The midfielder is now Bayern’s top scorer, adding to his tally with a clinical header and nicely taken near post finish. The Golden Boot winner in South Africa again looks to be the Germans’ most in-form goal scorer as the World Cup approaches—the U.S. defense will need to be constantly aware of his movement when the sides meet in Brazil. Germany’s Marco Reus and Borussia Dortmund have had a bit of a down year, but they delivered an excellent performance yesterday at Zenit in the Champions League. Reus stole the show for Dortmund, scoring a fantastic volley and also providing two assists in the 4-2 away win. Reus’ talent and pedigree suggest he’ll probably start in Brazil. Delivering continued performances like this one will make that a near certainty.

Germany’s Miroslav Klose notched his sixth league goal of the season in Lazio’s 3-2 win over Sassuolo. It was the type of opportunistic goal Klose has built a career upon, seen at the 1:00 mark below.
And it’s also the type of goal that could see him earn significant minutes in Brazil—the big center forward needs just two goals to set the all-time World Cup scoring record. Elsewhere in Serie A, Ghana’s Kwadwo Asamoah continues to excel for the ever-dominant Juventus. Here’s his assist on Carlos Tevez’s game winner via a clever drilled pass.

It seems Aron Johannsson and Juan Agudelo aren’t the only Group G players capable of scoring goals in the Eredivisie. Ghana’s Christian Atsu, on loan from parent club Chelsea, scored his third league goal of the season in Vitesse’s 3-1 win over RKC Waalwijk. We can’t find any video, so you’ll have to take our word for it.

With Cristiano Ronaldo finishing up his three-game La Liga suspension, we have to go back a week to find any Portuguese national team players who found the back of the net. Porto’s Silvestre Varela picked up a brace in a 2-1 win over Gil Vicente last weekend, showing off his attacking versatility with a header as well as a well-placed far post finish.
The in-form Varela probably won’t start in Brazil, but he’ll likely be utilized as an impact sub for Portugal. Who impressed you the most this week? Let us know in the comments section below. Blake Thomsen is a frequent ASN contributor. He’s scored as many World Cup goals as Toni Kroos, Christian Atsu, and Silvestre Varela combined. Follow him on twitter.