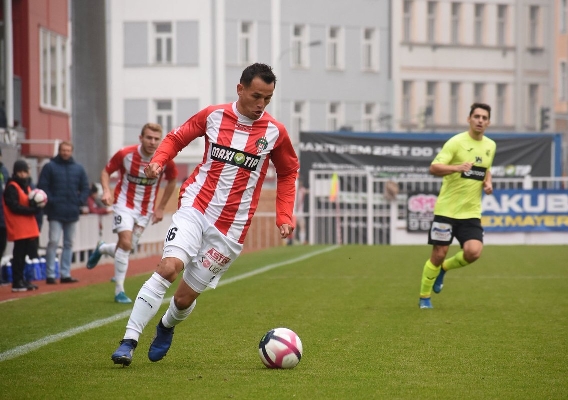 Luis Gil might have fallen off the radar among American fans, but he is okay with that. Now playing for Viktoria Zizkov in the Czech Republic, Gil was aiming to get away from where he was comfortable but not playing. He wanted a fresh start and found it in Prague. ASN's Brian Scairetta spoke with the former top U.S. youth international.
BY Brian Sciaretta Posted
March 17, 2020
9:10 PM

LAST YEAR, Luis Gil was at a crossroads. He had just finished playing out a contract with Querétaro in Liga MX and during that time he went on loan to three separate MLS teams. Playing time had been uneven but he still had options within MLS. Despite being well known and a former prominent U.S. youth national, Gil decided he needed to get away and find a clean slate.

It had been a decade since Gil played at the U-17 World Cup and now he was a few months out of a contract. When looking at his options, he felt he needed to get away. That process led him to sign with Viktoria Zizkov, a team based I Prague that was once in the top tier of the Czech Republic but had fallen on hard times and was now in the second tier.

“I was out of contract for a couple of months, so I needed to start get back into it,” Gil added. “I can't have too much time off. I wanted to be on a team where I'm playing consistently. That was the biggest thing for me. I wanted to kind of find myself again, to find my game again and just start from scratch in a way.”

Gil’s goal in the move was to find a situation where he would find coaches that would not look at his past and instead play him at his natural position which is the No. 10 role. So far that has worked. Gil has played in all 17 of Viktoria Zizkov’s games this season with 15 games coming as starts and he has scored three goals so far.

The club currently sits in sixth place and is five points out of the promotional playoff positions.  Like most leagues in the world, play is halted due to the CONVID-19 virus but prior to the suspension, Viktoria Zizkov had won three in a row.

But the most important part is that soccer is fun for Gil again and for the first time in a long time, he is playing the role he feels most comfortable.

“It's kind of it's a little bit different because back when I was in MLS, I didn't really get to play my actual position,” Gil explained. “With the national team, I've always played the attacking role, attacking midfield, the No.10 role. I didn't really get to play that in MLS. And I am able to do that here. And not many players like that come through here. Here it's mostly a lot of physical players. I'm able to bring my attacking play, my flair that I used to have with the national team and in my younger days. But at the same time, I've learned here that you have to hustle a little bit more and they're consistently running here. The ball is very direct sometimes. You have to win those 50-50 balls. That's that was the biggest thing for me was finding that balance of being able to play as a 10 but at the same time be able to get into those battles, which happens quite a bit.”

The future remains uncertain for Gil, but for now he is enjoying is soccer again and is eyeing a path forward. Success in the second tier of the Czech Republic can open doors in the top tier, which has well-known clubs like Sparta Prague and Slavia Prague.

He still follows both Liga MX and MLS on a regular basis but his goal right now is to climb the ranks of Europe and grow both on and off the field – where he has enjoyed living in Prague. Fluent in English and Spanish, Gil was set to begin taking Czech lessons but classes were postponed due to the Coronavirus.

On the field, his arrival was met with curiosity from both teammates and supporters of Viktoria Zizkov since Americans and Mexicans are extremely rare in the league. A common reaction among teammates when he joined was: “why are you here?” Meanwhile, supporters were excited to have someone with such a different resume.

But for now, Gil is looking to step out of the spotlight in MLS and Liga MX and grow in a place where he has a clean slate.

“The soccer here is actually very distinct,” Gil said.  “Czech football, I would say more in second league, than first, it's very, very physical and very direct. It's kind of its own football in a way. It's kind of under the radar, but it's actually a very pretty decent high level even at the second tier. Then obviously, once you get to the first divisions, you can start seeing the Sparta Prague’s, the Slavia Prague’s. Those teams are consistently fighting in the Europa League. It's been an adjustment at first, but I have found some success here. I'm playing consistently, scoring some goals, making some assists, making some plays. I'm getting back into it and getting back to myself. Hopefully I continue to grow.”