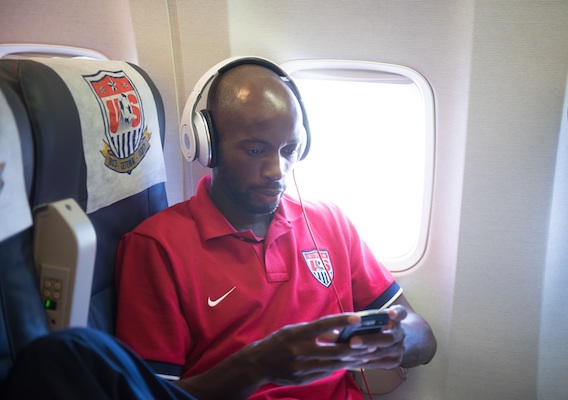 It's OK to be friends with your sources when you call yourself a "Faux Journalist" and you sometimes wear a cape while interviewing folks.

Nothing like a little #USMNT - #USWNT rivalry. (The women win.)

@sydneyleroux I was happy with 30. Damn

Herc is not impressed.

Flappy Bird? Yeah I remember playing that as a kid, only in my day it was called Super Mario Bros. Total rip off. #PulledItBeforeHeGotSued

Returning to his roots for preseason training.

I bet he put his feet up, like a boss.

That one time the @MLS Cup participated in a Kansas State Senate session http://t.co/d4xBT1Ypei

We are slowly making young Terrence more and more American. Next thing you know he'll be riding around in a Winnebago.

Hard to tell who is enjoying this more. Tie for first?

Valentines Photoshop and/or caption contest for signed goodies from me + @MixDiskerud !???????? Get Creative + Tag #StuMix pic.twitter.com/VRoVLukpUy

Oh the joys of the Winter Olympics.

That face u make on the inside when your partner falls in the figure skating competition #Olympics2014 pic.twitter.com/amSHsTIceZ

Guess who's me. Nothing wrong with a good pose, am I right? pic.twitter.com/nR0dB0ghki