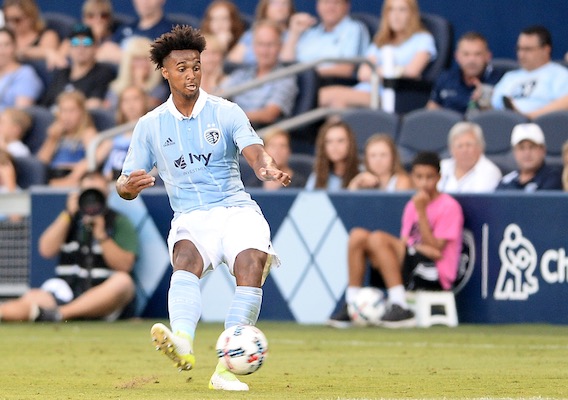 The biggest American soccer news of the weekend took place in a boardroom, not on the field, as the U.S. U-20 international inked a deal with one of the most prestigious soccer clubs in the world.
BY Brian Sciaretta Posted
September 10, 2017
7:00 PM

Erik Palmer-Brown was one of the best central defenders at the 2017 U-20 World Cup and has been a top prospect for some time. After several media outlets reported the deal, American Soccer Now can confirm that Palmer-Brown will join Manchester City on a four-and-a-half-year deal starting January 1, 2018.

Palmer-Brown lacks the necessary qualifications for a U.K work permit so he will have to go on loan. There are many possibilities but the most likely are in the Netherlands.

This is not the first time Palmer-Brown, 20, has been in Europe. In January 2016, Sporting Kansas City loaned the Ohio native to Porto where he started regularly for Porto B and helped it to win Portugal’s Segunda Division. At the conclusion of the loan, Porto opted not to end the deal via a prearranged buyout. Instead, he returned to Sporting Kansas City where he spent a large period of time with the U.S. U-20s for its World Cup qualifying and finals campaign in May.

Palmer-Brown will remain with Major League Soccer for the remainder of 2017 where he plays behind Matt Besler and Ike Opara—which has been the best central defense tandem in MLS this year. Breaking into Manchester City will be difficult for Palmer-Brown and he will have to navigate a path similar to the one Matt Miazga has embarked on with Chelsea.

The next few years he will likely spend on loan and he will have to make his decisions carefully. Loans are never a sure thing and he must be better than a club’s existing options to get playing time. Palmer-Brown had other options beyond Manchester City and while the money of City Football Group was a factor, it wasn’t the only factor. Instead, he was convinced the club had a pathway for him to succeed.

Palmer-Brown is easily one of the top American prospects in the sport. He has taken high-risk, high-reward path and it will be very interesting to follow.

The last thing Bruce Arena needed was an injury to a key player. But on Saturday Geoff Cameron was removed from Stoke City’s game against Manchester United at the half. The diagnosis? A hamstring injury—and according to the initial assessment the U.S. international will miss approximately two weeks.

That diagnosis would seem positive for Arena but hamstring injuries are often difficult to assess and they tend to linger. The U.S. and its fans are holding their collective breath as fellow central defender John Brooks is already injured.

On the other hand, DeAndre Yedlin made the 18 for Newcastle United on Sunday in a 1-0 win over Swansea. While he did not play, his return is a huge deal as the U.S. fullback positions are unsettled at the moment.

Little-known German-American Jann George, 25, is one of the hottest players in the 2.Bundesliga. On Friday he added two assists to his tally to help Jahn Regensburg to a 3-1 win over Heidenheim.

With three goals and two assists in five games, George is finally making the most of his talent. He was once a highly regarded teenage prospect at FC Nurnberg but his attitude had been called into question over the years and he spent a lot of time in the amateur levels. After helping Jahn Regensburg to two straight promotions, however, George appears to have his problems behind him.

Jonathan Gonzalez, 18, has been starting all season for Monterrey and has kept Mexican international Jesus Molina on the bench in the process. This Saturday, the California native went a full 90 for Monterrey in a 1-0 win over Necaxa. Gonzalez completed a huge percentage of his passes and was a dominant ball-winner on defense. He forced turnovers and won 50-50 aerial challenges to help Monterrey maintain possession.

The result saw Monterrey strengthen its grip on first place with 20 points through eight games. That is four points better than second place Club America.

The future of the central midfield position looks great for the United States with several young players stepping up. Weston McKennie, Gonzalez, Tyler Adams, Kellyn Acosta, and Cristian Roldan are leading the pack.

David Wagner continues to impress with Huddersfield Town. In his first month in England’s top flight, Wagner, 45, was named the league’s Manager of the Month for August. In an official tweet from the league, the EPL acknowledged Wagner's U.S. national team background.

The former #USMNT player has been named your @BarclaysFooty Manager of the Month for August ???????? pic.twitter.com/OJ4nqe2S6E

Wagner never had much impact on the U.S. team as a player as he found it tough to break into a forward contingent that included the likes of Eric Wynalda, Brian McBride, Joe-Max Moore, Preki Landon Donovan, and Josh Wolff.

Perhaps he will have a bigger impact on U.S. Soccer via the coaching ranks.

Miazga comes up big for Vitesse

Given his strong showing last season, it was only a matter of time before Matt Miazga got a chance to start for Vitesse in 2017/-18. Vitesse, after all, fought to bring the former New York Red Bull back on another loan from Chelsea.

On Saturday Miazga, 22, started and delivered a solid 90-minute effort in a 3-0 win over Excelsior.

This is good news for the U.S. national team, which has struggled at the back and could be without Geoff Cameron for the two October qualifiers.

In the win, Miazga led his team in touches with 77 and completed more than 80% of his passes. He also had four clearances and two interceptions. This performance should help him secure his place in the starting lineup in the games ahead.

Last week Stuttgart sent American winger Julian Green to Greuther Furth on a season-long loan. It didn’t seem like an ideal situation given that Furth was mired in last place without a point in the 2.Bundesliga and the team didn’t have a coach after a recent firing. Without a coach it was impossible to know if the club truly rated Green when it brought him on board.

But Green earned the start on Friday in an away matchup with Dynamo Dresden. In the end, Green went a full 90 in a 1-1 draw, helping Furth secure its first point of the season. Green’s outing was decent but hardly spectacular. He drew four fouls and completed 65% of his passes with one shot. He was not directly involved with any dangerous scoring chances.

Despite the club’s struggles and his rusty play (which is to be expected), Green just needs to see the field regularly. That has been missing for years. If he can play, then he can gradually get his career back on track.

If Timothy Chandler is going to get with Bruce Arena, performances like the one he gave on Saturday are bound to help. Chandler was very solid as he helped Eintracht Frankfurt to a 1-0 road win over Borussia Monchengladbach.

Things are breaking Chandler’s way in terms of the roster. Graham Zusi and Eric Lichaj haven’t seized the right back position and Yedlin is still recovering from an injury. Chandler is playing, and playing well. Of course he’s been a consistently good performer for his club but has yet to translate that over to the national team.

Meanwhile, Fabian Johnson did not get off the bench for Borussia Monchengladbach in this contest. While Johnson is still trying to return from a recent injury he picked up in August, it hasn’t been a good year for him. In a World Cup year, that is a huge concern for Arena and Co.