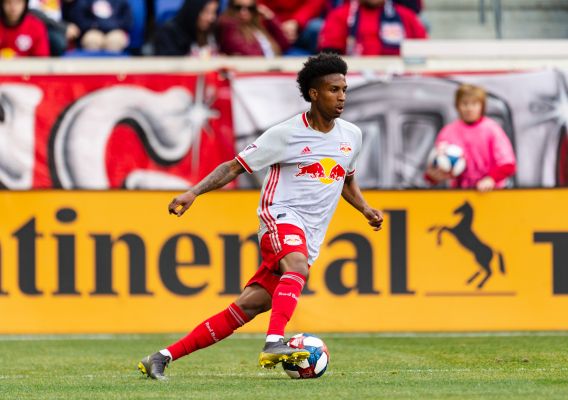 Duncan poised to continue growth for Red Bulls in 2020 & beyond

In 2018, Kyle Duncan saw the promising start of his career derailed by an ACL tear. But towards the end of the 2019 season, the New York native proved that he was back and the start of 2020 showed continued growth. Whenever the season resumes, Duncan aims to help RBNY get back to the playoffs and perhaps earn a spot on the U.S. U-23 Olympic team.
BY Brian Sciaretta Posted
April 24, 2020
8:00 AM

THROUGHOUT THE organization’s history, the New York Red Bulls, and formerly the Metrostars, have had a strong track record as being the starting point for many solid young American players who come from the tri-state area. From Jozy Altidore and Michael Bradley to Matt Miazga and Tyler Adams, the club been successful with giving meaningful minutes to elite local talent.

It remains to be seen who the next local player will be but right back Kyle Duncan has certainly looked the part recently before the league suspended play due to the COVID-19 pandemic.

At the start of the season, Duncan, 22, was one of the Red Bulls’ most effective players as the team earned four points from their first two games. He notched a goal and an assist in the opening win over Cincinnati and was strong defensively in a 1-1 away draw against Real Salt Lake.

Now as he is beginning to see his career take off, he has to deal with the league suspending play with no clear end in sight.

“It's kind of boring,” Duncan said.  “It's just training. Everyone stays in touch. We do regular virtual video sessions but I can't wait to get back with the boys.”

Kyle Duncan finds the back of the net for his second-career goal. #RBNYvCIN pic.twitter.com/woxgH1zu8c

Such an ambition to get back onto the field makes sense for Duncan as his performances have been building for quite some time. At the start of 2018, Duncan earned a string of four starts but suffered a major setback when he tore his ACL and was forced to miss the remainder of the season.

He came back early in 2019 although he was rusty and had to play for the Red Bulls II in the USL to get his form back. By the end of the season, he was fully beyond the ACL injury and the subsequent struggles. In the team’s successful run heading into the playoffs, he was back with the first team and putting in solid shifts – most notably in a 2-0 away win over Portland in September where he scored his first goal and a 2-0 win over Philadelphia the following week.

The start of 2020 marks the latest progression that started in 2018 and was only stalled by the knee injury. But the big difference is that over the offseason, Michael Murillo was sold to Anderlecht to clear the way for Duncan to be the fulltime starter.

“It's who they thought can win the position,” Duncan said. “I went to preseason thinking that, like, I want this position so much that I'm going to work for it. I am going to get it…When I tore my ACL, it was a pretty rough eight months coming back because I had to work a lot, and just watching the players on the field running around, I wanted to be out there with them. But I had all the tools that I needed: my coaches, my family, and the fans were all supporting me. They were all saying I was going to come back better - so just kept working and that motivated me even more to come back even stronger, all of them, and to show them that I really wanted to be here. And starting up this season, I'm actually doing that.”

Part of the process of Duncan’s successful emergence was the work he put in while he was away from the game injured as well as in his first few months back. During this time, he brushed up on the tactical side of the game.

It was also during these months when he showed maturity to address shortcomings in his game.

“I had some pretty rusty games,” Duncan recalled of his return. “Some goals were the result of some mistakes I've made. I knew that I had to prove myself after those games. I started playing in the USL, did what I had to do and didn’t complain at all. That's one thing that the coaches like to see, no complaining at all. Once they saw that maturity, they felt like I could be put back on the field. I don't want to let them down or let anyone down that believed in me.

“I really learned the tactics and just figured out where I should be at the right time,” he added. “That led to the goal I got against Cincinnati because it's all about life lessons. Maybe you won't be in that spot at the right time. But I have to be in that spot. If I'm not in that spot, I won't get what I want. Even Chris [Armas] pushes me to go up and tells me to drive. Once I see that from my coach, then I'm going to do what he tells me to do. At the same time, he says, trust my instincts sometimes. As you can see, I'm a defender. And that's my first priority.”

During his recovery, Duncan also had the support of his cousin, close friend, and United States international Tim Weah. The two come from a well-known family in the sport and their close relationship has helped each other during difficult times.

At first, it was Weah helping Duncan get through his knee injury. Now with Duncan back on the field, it is Weah who is sidelined. Back in August, Weah suffered a tear in his hamstring playing for Lille in France. He attempted to come back in February but suffered a serious setback minutes after coming into the game. With the situation reversed, it is Duncan who is helping Weah through these times

“He told me just to stay strong and don't worry, because you're just going to come back stronger,” Duncan said of Weah’s support. “We talk all the time. We text, we talk, we facetime. Even now, he's in New York about 10 minutes away. I talk with his mom and tell her that a year from now or two years from now, he's just going to laugh about his injury. It is going to be like it never happened.”

There is also the possibility that the two could be teammates sooner than later. Both players are age-eligible for the U.S. U-23 team which will attempt to qualify for the Olympics next summer.

The postponement of the Olympics into 2021 helps Duncan as he was left off the qualifying roster last month but if he can continue his upward trajectory, he has a good chance. Meanwhile for Weah, he has always enjoyed playing for the U.S. team in tournaments and insisted on playing in the U-20 World Cup in 2019. After missing most of a year, the U.S. U-23 team could be an important tool in getting him back on track.

For Duncan, he has had a few U-23 call-ups this cycle but has only recently been back in form. Breaking onto that team would see him compete in his first major youth international tournament.

“It's something that I think about but I also think about being with the team [the Red Bulls] and trying to help them move forward to win an MLS Cup,” Duncan said. “I feel like that would be a big achievement for us. And I feel like if I'm invited to the Olympics and the qualifying team, that would also be a big achievement as well. Qualifying would bring a lot of exposure to them. The Olympic team is really great and if the team needs me, that's where I'll be.”