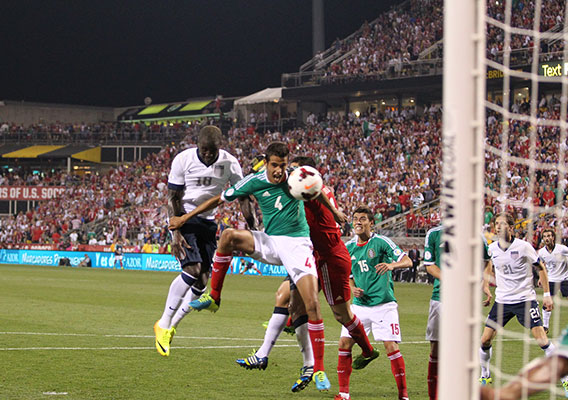 The United States men's soccer team overcame a sluggish first half to defeat Mexico, 2-0, in front of 24,000-plus screaming supporters in Columbus, Ohio. Dos a Cero, yet again.
ASN Slideshow

BY Noah Davis Posted
September 10, 2013
9:57 PM
COLUMBUS, Ohio—Despite missing three of its top starters due to suspension, despite losing Michael Bradley to an ankle injury four days earlier, and despite a hamstring injury that forced Fabian Johnson to leave the game at intermission, the United States men's soccer team defeated Mexico, 2-0, to qualify for the 2014 World Cup Finals in Brazil. "We are all extremely proud of this team. They gave everything they had tonight," head coach Jurgen Klinsmann said in the post-game press conference. Playing before a manic crowd of U.S. supporters, the U.S. took the lead in the the 49th minute when Eddie Johnson rose above El Tri defender Diego Reyes Rosales to power a perfect Landon Donovan cross into the back of the night. A half-hour later Landon Donovan tapped in a Mix Diskerud cross to put the game away. You could feel the crowd exhale when Johnson nodded the ball past goalkeeper Jose de Jesus Corona early in the first half. It was that kind of match—at least in the first half. Mexico established control of the match from the first whistle and dominated play for the first 40 minutes or so. Some of that may be due to the patchwork quilt of a squad that Jurgen Klinsmann put on the field. Nerves may have played a factor too. Whatever the reason, Mexico looked like the home team, not the U.S. Tim Howard was forced to make two strong saves in the first half, and central defender stepped up too, clearing dangerous balls and breaking up multiple El Tri attacks. After an early gaffe or two, Jermaine Jones elevated his game and helped solidify an American that seemed grateful when the first half ended. The sell-out crowd of more than 24,000 helped them back into the match. "It is a psychological game at the end of the day. You could feel it in the body language of the Mexican players. Once they didn't get a goal that they tried really hard to get for the first 20 or 25 minutes, they got heavy and heavier." Klinsmann said. The tide shifted noticeably after the break. The United States held possession much better, and pressed further up the field. After Eddie Johnson's goal, the U.S. seemed to relax, and Mexico, understandably, shifted into pre-panic mode. "They were really defeated," Omar Gonzalez said. Kyle Beckerman, who started for Bradley in the center of the field, agreed with his teammate: "Their style of play is tough to play from behind." Full-blown panic ensued among the Mexican side after Mix Diskerud created a fabulous goal for the U.S. in the 78th minute. Turning an innocuous throw-in into a great chance, Diskerud picked up a pass at the top of the 18-yard box, dribbled to the touchline, and then made a delightful pass across goal. Landon Donovan, suffering from a gruesome case of pink eye, was in the right place at the right time and tapped the ball into the back of the net. Two-nothing. Dos a cero. In Columbus. Again. In a bizarre twist, Clint Dempsey drew a penalty kick in stoppage time, and it looked for the world like the U.S. would win 3-0. But Dempsey, who took the PK, missed the target badly. His miss preserved the 2-0 score. The Panama-Honduras game started an hour later than the U.S.-Mexico match, and the players watched the game in the locker room. When the match ended in a 2-2 draw, meaning the Americans were through, a celebration erupted. "You can say a little party went off. We had some good fun with some champagne," Alejandro Bedoya said. The American players returned to the Crew Stadium field where they danced and cheered with the few hundred fans who stayed to watch the game on the big screen. For a few brief moments, there was relief and excitement. Then, it was back to work. "It would be nice to go on a nice run in the World Cup," Dempsey said. "That's something I haven't gotten to experience."