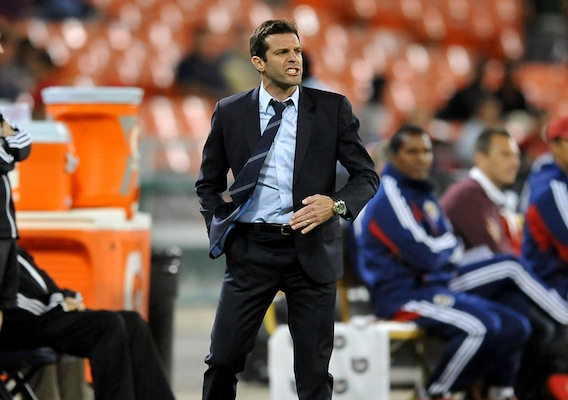 Coming off a quick international break, club matches return to Europe this weekend. Of course in some places, like here in North America, the action never really stopped. Here are our picks.
BY Jon Arnold Posted
November 16, 2012
12:32 PM
SATURDAY
Arsenal v. Tottenham Hotspur
7:30 a.m. (All times Eastern), ESPN2
This North London derby is always a good option, but it’s buoyed for U.S. fans by possible appearances by Brad Friedel and Clint Dempsey. Freidel, having a strong season at the age of 41, continues to make you feel incredibly out of shape for your age. Meanwhile Dempsey hasn’t been able to replicate what he did last season at Fulham, but he could win plenty of Spurs fans over with a big game in this fixture. Bayer Leverkusen v. Schalke
12:30 p.m., GolTV
Jermaine Jones didn’t impress you against Russia, though you did like him more than the New York Times and Sports Illustrated did. Those missed chances are behind Jones now, who along with second-place Schalke take on Bayer Leverkusen. Leverkusen—and back-up goalkeeper David Yelldell, an American unlikely to see the pitch—have started the Bundesliga season well, sitting in a European spot. It should make for a spirited contest against Jones and Schalke. SUNDAY
DC United v. Houston Dynamo
4 p.m., NBC Sports Network
Ben Olsen and his boys are down, but they’re not out. While there’s still mystery surrounding which of his injured players will be available, it’s pretty certain that RFK Stadium will be rocking. Of course, the Dynamo enjoy a two-goal advantage, and might be better at protecting that lead than any other team in MLS. Club Tijuana v. Monterrey
6:30 p.m., Univision Deportes
Though Edgar Castillo is the normal starter, and Joe Corona has made more U.S. national team appearances, the American name on everybody’s lips today in TJ is Greg Garza. The burly Texan scored the only goal in the first leg of this series, and now the battle continues in Estadio Caliente, where Tijuana is undefeated this season. Things look good for los Xolos and their American trio to march on to the semifinals, but it’s still worth finding a friend’s place or a bar with UDN to catch the guys in action between MLS playoff matches. Seattle Sounders v. LA Galaxy
9 p.m., ESPN
The Galaxy certainly enter the match with a nice cushion, but Seattle has been here before and were nearly able to claw their way back. L.A. is flying high, though, peaking at the right time of the season. Their veteran attackers will be keen (get it?) to punish Seattle should they venture too far forward in their quest to level things up. BEST OF THE REST
Premier League: Reading v. Everton (10 a.m. Saturday, foxsoccer2go.com) Tim Howard seeks to keep a winless Reading team scoreless as the Royals desperately try for a win at the Madejski.
La Liga: Osasuna v. Malaga (10 a.m. Saturday, beIN Sport Spanish) Oguchi Onyewu finally got a league start, but it remains be seen if he’ll get another after making an error leading to a goal in the team’s 2-1 loss to Real Socieded.
Serie A: Roma v. Torino (2:40 p.m. Monday, beIN Sport) Michael Bradley continues to build his case for becoming No. 1 in next month’s ASN 100. Watching him in midfield is the perfect way to start or finish your week, depending on how you look at it. NO U.S. TIE, BUT....
Serie A: Juventus vs. Lazio (noon Saturday, beIN Sport) The Old Lady has been nearly unstoppable with Alberto Zaccheroni at the helm. A retooled Lazio will hope to give them a run Saturday.
La Liga: Real Madrid v. Athletic Bilbao (4 p.m. Saturday, beIN Sport) These two sides provide a study in contrast, often off the pitch as well as on. Bilbao isn’t as strong as they were last season, but can still provide los Blancos a stern test.
La Liga: Sevilla v. Real Betis (3:40 p.m. Sunday, beIN Sport Spanish) One of the world’s most underrated cross-town derbys provides a nice Sunday matinee. With Betis flying high this year, Sevilla will be even more eager to give them a rude welcome. What will YOU be watching? We want to hear. Share your soccer viewing plans in the Comments section below.