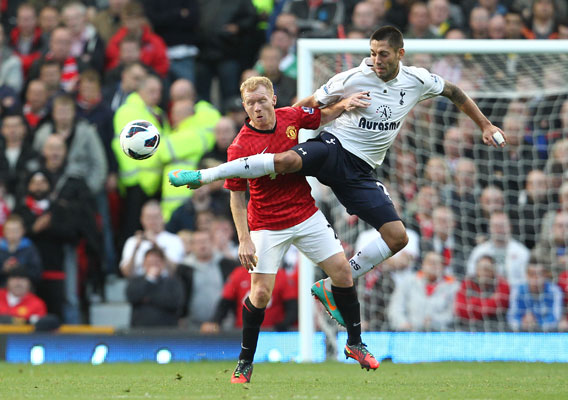 Clint Dempsey's 52nd-minute tap-in proved to be the game-winner in Tottenham's thrilling 3-2 win over Manchester United. It was Spurs first win at Old Trafford since 1989.
BY John Godfrey Posted
October 01, 2012
4:44 PM
It wan't the prettiest goal of his career—in fact it might have been one of the most pedestrian—but Clint Dempsey's right-footed shot made all the difference in Tottenham's 3-2 win over Manchester United at Old Trafford. It was Spurs' first away win against United in 23 years. In the buildup to the strikel, Spurs winger Gareth Bale gathered up the ball on the left flank and sent in a blistering low strike. Manchester United goalkeeper Anders Lindegaard did well to block the shot, but the rebound bounced straight into Dempsey's path, and the opportunistic forward guided the ball into the back of the net.It was Dempsey's first goal for Spurs and his 51st career tally in the English Premier League. "I've been frustrated," Dempsey told ESPN. "I had one called back against Lazio and then as the games go on, you're not scoring, you start feeling the pressure. But it's good to open my account and it's good for us to get my first win here."