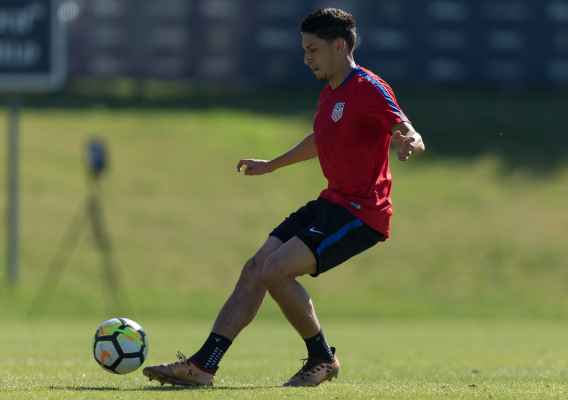 Delgado eager to make strong first impression for the USMNT

Marky Delgado won a lot of silverware in 2017 for Toronto and has been a long-time veteran of United States youth national teams. Now the Californian will be aiming to make a strong impression on Saturday night in what could be his first cap with the USMNT.
BY Brian Sciaretta Posted
January 26, 2018
9:00 AM

By all accounts, Marky Delgado had a very good 2017. He was a regular starter for Toronto FC, which won MLS Cup, the Supporters Shield, and the Canadian Cup. He played alongside many of the league’s best players and more than held his own.

Now in 2018, the native of Glendora, California is aiming to make a positive debut with the U.S. national team when it faces Bosnia and Herzegovina on Saturday night in Carson, near his hometown. Of course, this camp is taking place amidst the dominating story of the team’s failure to qualify for the World Cup and the game against Bosnia will mark its first home game since the end of qualifying.

The mindset interim head coach Dave Sarrachan has tried to convey is that this camp is the start of a new cycle and this is a good opportunity to begin adjusting to the international game since there will be a lot of openings on the team in the years ahead. As a central midfielder, Delgado is aiming to become a regular on the team.

“Winning MLS Cup was a big thing but I am not putting any more pressure on myself than I did before,” Delgado told ASN from California. “My goal for this year is to get a spot on the national team - to stick with it and not just getting called in from time to time. I am sticking to what I know and what I can do. Hopefully I bring it onto the national team.”

Following the friendly against Bosnia, Delgado will return to Toronto ahead of its preparations for the 2018 CONCACAF Champions League. After winning all three pieces of silverware in 2017, there are heavy expectations for the team to be competitive and perhaps emerge as the first MLS team to win the regional title.

“We definitely believe we can compete in this tournament,” Delgado said. “The main goal is to win it and we believe we can. Last year the goal was to win everything and that's not going to change this year. We're going to go after it with everything we've got.”

After starting his career with Chivas USA--before moving to Toronto after Chivas folded--Delgado has gradually broken through with the Canadian team. At 22 he has already played in 117 MLS games, totaling 8,541 minutes (Cup appearances have taken him over 9,000 minutes).

Still, there is no question that playing for Toronto has raised his profile, as did a standout performance in MLS Cup last month, where he helped Toronto completely control the midfield and outplay Seattle en route to a 2-0 victory.

Delgado has learned a lot from the players around him at Toronto and when he got the call-up for the camp, he received a call from Michael Bradley offering him both congratulations and advice.

“When I received the e-mail I was pretty excited and I had some nerves,” Delgado said. “I spoke to Michael and he gave me some advice and some words of encouragement. I let him know I was feeling a little jittery. I wasn't too sure what to expect and he told me that there were a lot of people in the same boat as me, I just needed to go in and show what I could do, and he was sure I would do great. That really calmed me down and it helped me out. It's great to know, with Michael and Jozy, that I have those guys.”

Throughout the MLS playoffs, Delgado also was on the field when Toronto would play an away game and both Bradley and Jozy Altidore would receive harsh treatment from American fans who booed the two players relentlessly whenever they touched the ball.

The failure to qualify for the World Cup still lingers for most fans and Delgado admits it was tough to watch but he was impressed with how the long-time USMNT duo handled the treatment.

“Everybody has their own perspective,” Delgado said of the booing. “But as teammates, I see everything. But they handled it well. It is what it is. It happened, and fans aren't happy, of course. I'm not sure who would be. But they're not happy themselves and fans have to understand that too. They gave it their all and things didn't come out the way they wanted. At the end of the day, the damage is already done and there is nothing you can do about it. There is no point in really booing them. I feel that is too much. They did a good job blocking it out and performing well. They're professional.”

No matter who the next coach or technical director of the national team is, Delgado wants to emerge as a candidate to play in central midfield. Even with the loss of Jonathan Gonzalez to Mexico, there are still a lot of young players emerging in that position.

Delgado has indeed thrived playing alongside not only Bradley and Altidore, but also top international players such as Sebastian Giovinco and Victor Vazquez. But on Saturday night he can step outside of their shadow and into his own spotlight. He insists that the players on the roster are not dwelling on what happened last year but are simply more encouraged about what is ahead.

“Camp has been great. It's been a learning experience for sure,” Delgado said. “[Dave Sarachan] is holding us to a high standard and the national team is a high level. When we're not as sharp, he is staying on top of us. He's holding us accountable. Coming into our game against Bosnia, he is expecting us to go out and put on a show. Hopefully we can exceed his expectations."

"We're re-building and we are looking forward, not back.”