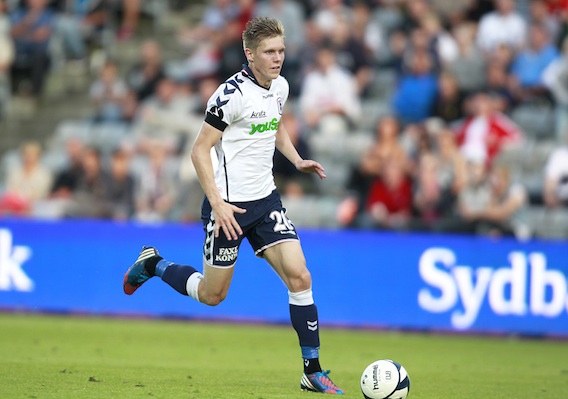 In ASN 100 action over the weekend, Icelandic-American goal-scoring machine Aron Johannsson revealed he is still considering playing for the U.S. national team. For this and other news, keep reading.
BY Josh Deaver Posted
December 17, 2012
5:43 AM
Tim Howard—ASN rank #4
In an incredible feat equaled by only one other player—fellow American Brad Friedel—U.S. goalkeeper Tim Howard registered his 200th consecutive Premier League start on Saturday for Everton, in a 1-1 draw with Stoke City. Prior to the match, Howard discussed the milestone with Everton’s official website. Fabian Johnson—ASN rank #5
The consistent play of the German-American leftback is one of the few bright spots in what has been a dreadful Bundesliga campaign for Hoffenheim. On Saturday the club continued its poor form, falling 3-1 to a powerful Borussia Dortmund side. Johnson played 90 minutes, as usual, and helped create Hoffenheim’s first-half goal with an incisive pass that cut through the Dortmund back line. (Fellow American Danny Williams was not included in the game day roster.) Winless in their last six and sitting 16th in the league table, Hoffenheim are currently seven points from safety and in real danger of relegation. Jozy Altidore—ASN rank #8
Altidore got back into the score sheet on Saturday, bagging a brace in AZ Alkmaar’s 2-1 win over PEC Zwolle. The beneficiary of some poor defending, Altidore pounced on a sloppy back pass to open the scoring in the 2nd minute. Twenty-nine minutes later Altidore once again, this time out-hustling his marker before scoring the eventual game winner. The two goals brings his total to 11 on the season and 14 across all competitions. With 18 games remaining in the Dutch season, Altidore has nearly equaled his goal total from the previous campaign. The question: Will he still be with Alkmaar after January? Carlos Bocanegra—ASN rank #14
The U.S captain returned to action for Racing Santander in Sunday’s 1-0 loss to Sabadell. Only four weeks after suffering a hamstring tear in the U.S friendly against Russia, Bocanegra played a full 90 minutes and picked up a yellow card. With less than two months before the Hexagonal round of World Cup qualification begins, Bocanegra’s return could not have come at a better time for the U.S. national team. His club needs him as well: Santander is currently facing relegation and has gone winless in their last six league games. Jermaine Jones—ASN rank #16
In response to his red card in last weekend’s loss to Stuttgart, the DFB handed the Schalke midfielder a four-match ban. The suspension, based on Jones’ reputation as a “serial offender,” will last through the German winter break, leaving Jones eligible to return on Feb. 9, four days after the U.S. opens Hexagonal round play against Honduras. Much like last winter—when Jones was also suspended—he may be included in the annual January national team training camp. (Schalke plans to appeal the decision.) Brad Guzan—ASN rank #19
Guzan and teammate Eric Lichaj helped Aston Villa pick up an important win on Saturday, embarrassing Liverpool in a 3-1 win at Anfield. Although the Villains were outpossessed and handily outshot by Liverpool, Villa converted their few chances with the help of some sloppy defending. Guzan faced 29 shots but allowed only one consolation goal minutes before the final whistle. Lichaj had an up-and-down day playing out wide in Villa’s 3-5-2 formation. Early on he nearly caused an own goal, but he also managed to clear a sure Liverpool goal off the line and he participated in the sequence that led to the eventual game-winning goal. Mix Diskerud—ASN rank #33
Diskerud has been linked to Major League Soccer and the Portland Timbers in what could be a shock January transfer. After a stellar campaign for Rosenborg, many felt a big European move was in the offing for the skillful midfielder. With reports that Diskerud already turned down an offer from Austrian side Rapid Vienna, a move to MLS could be a huge coup for both the league and Portland. If completed Diskerud would reunite with U-23 National Team coach Caleb Porter, who is currently in the process of overhauling the underperforming Timbers roster. Luis Gil—ASN rank #55
The Real Salt Lake midfielder headlines the 24-man roster called up on Thursday by U.S Under-20 coach Tab Ramos. The team, currently gathered in Sunrise, Fla., will participate in several scrimmages as well as a closed-door friendly with Venezuela before training camp ends on Dec 22nd. The squad, which features numerous outstanding prospects, is preparing for the upcoming CONCACAF U20 championships, the qualifying tournament for the 2013 U20 World Cup. Due to club commitments, several U-20 standouts are unavailable for this camp, including ASN 100-ranked defenders John Anthony Brooks and Will Packwood. Aron Johannsson—ASN rank #62
The Danish SuperLiga’s top scorer revealed that, if not for injury, he would have accepted Jurgen Klinsmann's recent invitation to attend and observe the U.S national team January training camp. On Saturday, Johannsson told an Icelandic radio station, "I would do it but I need to undergo another abdominal hernia. I wanted to go and see the possibilities, how they work and stuff.” The Alabama-born striker has stated several times that he is keeping his options open but will likely be forced to make a decision shortly as World Cup qualifying continues in 2013. John Anthony Brooks—ASN rank #79
On Saturday the German-American central defender registered another start for 2.Bundlesiga leaders Hertha Berlin—his 10th in the last 11 league matches—in a 2-1 victory over FSV Frankfurt. The imposing Brooks earned his spot in the XI by helping to anchor a stingy Hertha defense that has allowed just six goals when he is in the starting lineup. "He took advantage of his opportunity," manager Michael Preetz said. "He seems more focused than in the season's first few weeks." The Old Lady is unbeaten in 17 league games and is making a serious push to return to the German top flight next season. Encouraged by Johannsson’s willingness to consider playing for the United States? Intrigued by Brooks’ potential? Share your thoughts in the Comments below. Josh Deaver is a former academic turned soccer obsessive. Follow him on Twitter, @USFootballGuy, for daily updates.