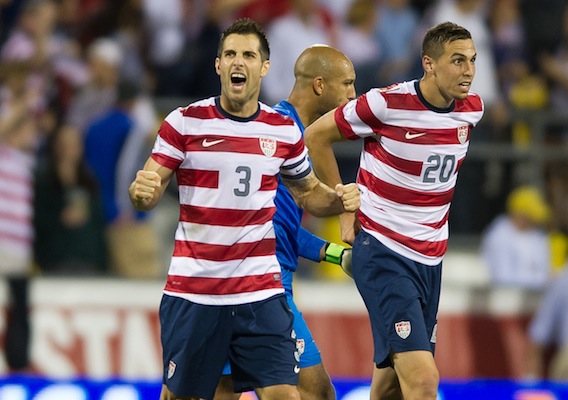 De-Fense!: The Future of the American Backline

ASN's defensive specialist breaks down his qualifications for the job and provides a glimpse into his hopes and dreams for the American back four. Hint: Gonzalez, Omar and another member of the LA Galaxy.
BY Andrew Lewellen Posted
October 02, 2012
4:00 PM

I was 17 years old, and it was a scorching July morning on the soccer training field at Wake Forest University in North Carolina. I was there for the Wake Forest Soccer camp, had been invited by the coaches. I was playing in some sort of possession game—standing at the back of the field, defending an end line and trying to serve long balls to target players at the other end of the field—when Jay Vidovich, the Wake Forest head coach, pulled me off the field to talk to me. This was the sort of thing you dreamed about as a high school kid: a college coach of a nationally ranked team talking to you one-on-one, telling you he wanted you to play for them. Something out of Rudy.

But Coach Vidovich didn’t tell me he wanted me to play for him. He started analyzing my game. He said I had a lot of “potential.” But he knew I’d been playing forward throughout high school, and if I wanted to play Division I soccer, I couldn’t play forward. I had to play defense. He started telling me why: I didn’t have the mentality to be a forward, didn’t seem like I’d take the kind of risks a forward needs to take.

That afternoon, while speaking to the whole camp—probably 200 kids—he addressed what he meant by the word “potential.”

“It means you suck now, but you could be good.”

This was the summer of 1998, and I’d spent the previous month watching the ’98 World Cup, studying the play of the world’s best defenders: Roberto Carlos, Cafu, Lillian Thuram, Marcel Desailly. I’d watched Thuram—the tall, powerful, sleek defender—score the game-tying and game-winning goal in France’s semifinal win over Croatia. I’d watched him and Desailly, Bixente Lizarazu, and Frank LeBoeuf shut down the Brazilian attack in France’s 3-0 win against Brazil in the final. In Sports Illustrated’s feature story on the World Cup Final, I read Zinedine Zidane say that while everybody talked about himself or Ronaldo being the best player in the world, that title actually belonged to Thuram.

Over the next year, I watched the replays of France’s semifinal and final victories 40, 50 maybe more times on my parent’s VCR. I studied Thuram and Desailly and Laurent Blanc and Roberto Carlos and Cafu. And I began to learn the art of defending, the subtleties that distinguish a world-class defender, what one can do for his team: the ability to always remain between an attacker and the goal; the ability to watch both one’s mark and the player with the ball so as to predict the game’s next move; how to decide when to close space and win the ball, when to drop off and slow down the play; how to make a forward run; how a great defender immediately turns a tackle into offensive possession—particularly a counter attack; and the essential importance of good distribution out of the back.

The next summer, I joined the Wake Forest team as a recruited walk-on. I only spent a year at Wake Forest—in retrospect I wasn’t mentally prepared for the challenge of playing in the ACC—before transferring to the College of Wooster in Ohio, a DIII school. But my education in the art of defending remains with me, and it’s still the area of the game I study most intently.

An exceptional defense is a hallmark of the world’s best teams. The lineups of the recent World Cup Champions prove this: in 2010, Spain had Gerard Pique, Carles Puyol, and Sergio Ramos. Italy in 2006 had Fabio Cannavaro and Allesandro Nesta. Brazil in 2002 had Lucio and Cafu and Roberto Carlos. In 1998, France had that extraordinary back line of Desailly, Blanc, Lizarazu, and Thuram.

But the United States national team has not had a lockdown back four. Witness the 4-2 loss to Mexico in the CONCACAF Gold Cup Final in June of 2011. Witness the deplorable defensive letdowns in the 2010 World Cup, during which the team surrendered a goal in the first 15 minutes in three of their four matches. This isn’t to say that the team’s offensive output has been stellar, but there are few things so deflating to a team and its fans as giving up an early goal—let alone doing it consistently.

For all the tactical changes Jurgen Klinsmann has been working to make in the national team—a greater emphasis on possession, players taking more risks on offense, infusing a more creative flair into the team—creating a reliable, organized, impenetrable back line needs to be one of his top priorities. It will be a long time—if ever—before the U.S. possesses the type of offensive firepower that could negate weaknesses in the back. The good thing is that over the past year, under Klinsmann, the defense has performed: In 2012, aside from a 4-1 loss to Brazil in May, the U.S. has surrendered only five goals in 10 games. And the defense posted shutouts in the historic victories over Italy (1-0 in Genoa) and Mexico (1-0 in Mexico City).

In the 1-0 victory over Jamaica in the World Cup Qualifier on September 11th, the team’s defensive performance was one of the highlights of the match. At right back, Steve Cherundolo excelled at both going forward and defending, and many analysts said he was the man of the match. Geoff Cameron and Carlos Bocanegra held firm in central defense, even in those nervy final 20 minutes when Jamaica, down a goal, was surging to earn a tie. And Fabian Johnson showed he might be the answer to the United States’ long-standing question mark at left back.

The U.S. needs to get results in its remaining CONCACAF semifinal World Cup Qualifiers, against Antigua and Barbuda and Guatemala, to qualify for the Hexagonal. And questions remain about the backline. Cherundolo and Bocanegra are getting up there in age; they’re both 33, will be 35 when Brazil 2014 rolls around. And proven depth at defense is lacking. Oguchi Onyewu has been struggling for a number of years, ever since his knee injury in 2009. Michael Parkhurst has performed well for his club, FC Nordsjaelland in Denmark, but he lacks international experience. Clarence Goodson also has experience, but he, too, is advancing in age; he’s 30.

So Klinsmann should look for more options. The good thing is that there are possible candidates to crack the national team. Leading the list is Omar Gonzalez of the L.A. Galaxy, the 2011 MLS Defender of the year. Gonzalez is only 23, but he’s already a proven winner: he won the MLS Cup Championship with the Galaxy in 2011, as well as an NCAA title at Maryland. He’s tall—6’5”—tremendous in the air, and stands poised in the Galaxy back line. His partner with the Galaxy, A.J. DeLaGarza, who has earned two caps for the national team, is another candidate to get a shot at more international appearances.

The ongoing search for reliable defenders and the mention of Gonzalez and DeLaGarza—two of Major League Soccer’s top defenders—brings into question another key aspect of the national team as a whole: player development. The U.S. has long struggled to find a way to develop top youth players into world-class professionals. That might be changing with U.S. Soccer’s Development Academy, which the federation launched in 2007 to give American kids a training experience that is on par with that of their international counterparts. But the Academy is young, and major gaps in American player development remain, particularly for players aged 18-22, who must often decide between going to college or taking reserve positions with MLS teams, neither of which provide the comprehensive training opportunities top foreign players receive at elite clubs.

The coming months are a crucial point in the evolution of the national team. Over that period of time, I’ll been analyzing how the team’s defenders are performing for both club and country, as well as profiling emerging young players who might get a shot at making a contribution at the international level.

So get out your Thundersticks, crank up the electronic bass drum, and join me in a resounding chant. De–Fense!