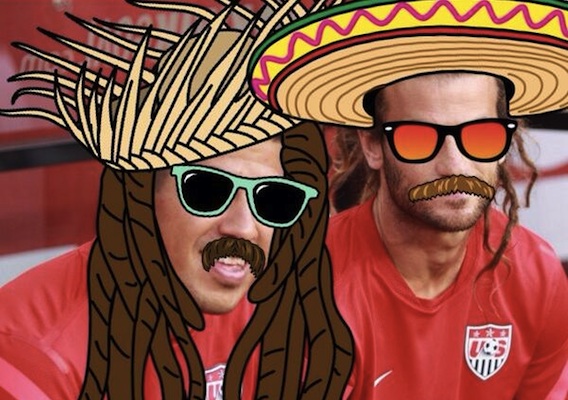 United States national teamers love to Tweet, and Justin Churchill loves to highlight their best efforts in his weekly column. Here's the latest incarnation of Tweets of the Week.
BY Justin Churchill Posted
May 11, 2014
10:25 AM

We made a strategic decision to pick this Altidore tweet instead of a few others he may now regret....

And they said it couldn't be done... Well done to everyone involved with @SAFCofficial

Falling asleep in public is risky these days.

Any dude with a line shaved in his head is cool. Unless he uses a neck pillow... Street cred gone! #notquincytime pic.twitter.com/k9Sz7am5W3

We'll take the plug. In fact, mentioning American Soccer Now immediately puts you on the short list for Tweets of the Week consideration.

Episode 2 of the 3 part documentary being done on me by American Soccer Now is here! Check it out!!!… http://t.co/WS7PJCdafG

If that armor can protect against injury, we'd like to see 22 others wearing the same.

It's almost time for us to battle aliens to save the world. Stay tuned... #Galaxy11 #GalaxyS5 @SamsungMobile pic.twitter.com/noq9fAlRY5

New scouting tactic? Will you be bringing the drone to Sao Paolo, Mr. Gonzalez?

Just shot these guys playing some pick up. Love it, but i think they need some sidelines... pic.twitter.com/g7jK3sTYpW