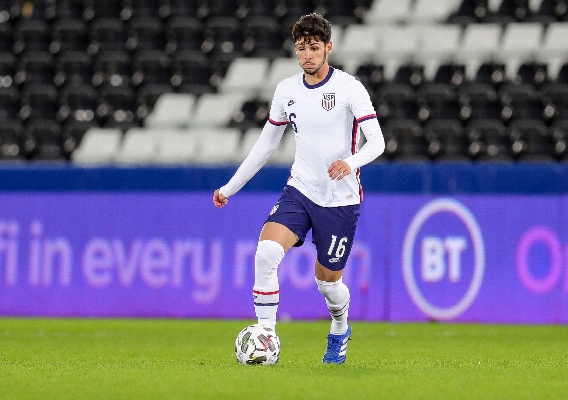 Cardoso aiming to boost the U.S. U-23 team in Olympic Qualifying

Since soccer returned from the COVID shutdown, Johnny Cardoso has enjoyed a steady rise. He enjoyed his first season as the professional level with Internacional, scored his first goal and earned his first two caps with the U.S. national team. Now he is ready for his first official international tournament as part of the U.S. U-23 Olympic qualifying team - which opens against Costa Rica on Thursday. ASN's Brian Sciaretta spoke with Cardoso on his journey to this point.
BY Brian Sciaretta Posted
March 17, 2021
3:00 PM

EIGHTEEN MONTHS AGO this week, Johnny Cardoso stepped foot onto the field for the first time in a Brazilian Serie A match and played 15 minutes for Internacional in a 3-1 win over Atletico Mineiro. He was a young player still five days shy of his 18th birthday, and little did he realize at the time that it would not just begin his career with one of the top Brazilian teams but it would also see him reconnect with the country of his birth and become part of a very promising generation of players now within the United States national team and youth national teams.

Within a matter of weeks, United States national team manager Gregg Berhalter called Cardoso and the two New Jersey natives spoke. Cardoso was born in Denville, NJ nine days after the September 11 attacks in 2001. He returned to his parent's native Brazil when he was still very young.

In November 2019, Cardoso represented the United States for the first time at a U-23 camp where he impressed head coach Jason Kreis. Cardoso was in-line for a call-up the following March but the COVID-19 shutdown postponed it until November. It was there were Cardoso made his first two full national team appearances in friendlies against Wales and Panama.

But now, Cardoso is set for another milestone as this week he will begin taking part in his first major tournament with the United States when he will be part of the U-23 team’s midfield for Olympic qualifying in Mexico. 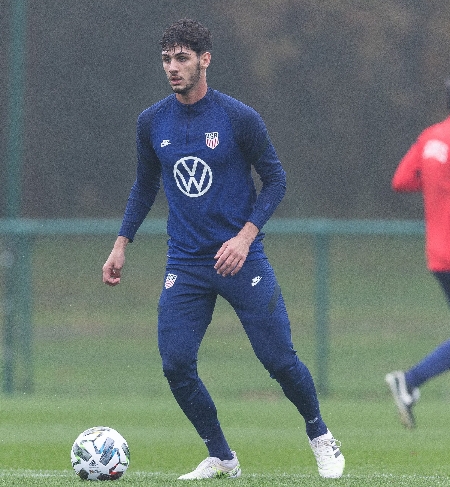 The past 18 months has seen him grow into the team and feel at home with the program, now he wants to deliver results.

“Since our first conversation [with Gregg Berhalter] I knew the integration would be easier if I had good performances, if I played and trained well,” Cardoso told ASN from Guadalajara. “So, I worked hard for it and I feel very comfortable with my teammates. I also felt so welcomed by everybody, so yes, I feel at home.”

“Receiving the opportunity to participate in this tournament is such a rewarding experience, part of objectives I was aiming to achieve in my career,” he added. “Representing the country is very rewarding and I am very happy about it. Of course, I am aware that continuing this job is up to me, it depends on my effort and I will give my best.”

Thus far in training with the U-23 team, Cardoso has been setup in both in his more typical defensive midfield position but has also been working on pushing forward into the attack and contributing offensively. 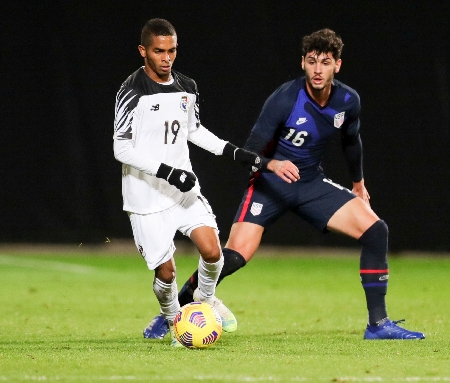 “He's a really, really interesting player,” said Kreis. “In fact, I didn't know almost anything about him before the fall of 2019. We were talking on a national team scouting call and we brought up this player. We talked quickly and said let's look to bring him into the next U-23 camp. We were able to bring him to a camp we had in Miami and it was the first time I've seen him play or work with him. At first you could tell he was a little timid to get into the group. He was having a little trouble with the language. By the end of camp and his performance against El Salvador, he really came on and showed some really, really great stuff.”

“What I saw was a player we were looking mainly at in the No. 6 position but with a guy who can do some really creative things in the attacking third of the field,” Kreis continued. “After talking with the player, you learn quickly he was actually developed as a striker. He played the season before as a striker with their U-23 team. He's a player with the ability to make plays happen in the final third and that is the position we are going to be looking at him mainly in this tournament.”

Cardoso, 19, is quick to point out that he knows that this tournament will be difficult with just two teams advancing to the Olympics this summer but he also is confident in the quality of the team. Unlike most of the players in camp, Cardoso has only been with the team briefly and arrived on Sunday from Brazil. 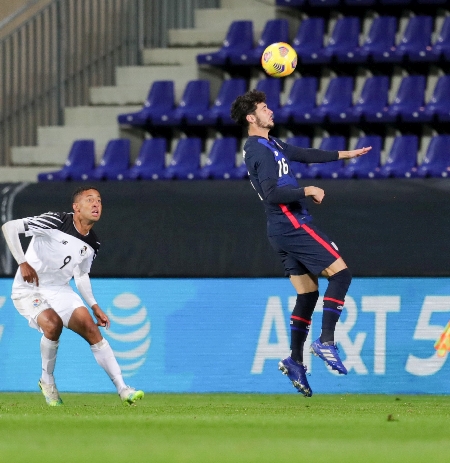 At Internacional, Cardoso has been starting for the club this past month in the local Campeonato Gaúcho tournament. That tournament in February immediately after the conclusion of the Serie A season where Internacional finished second, one point behind Flamengo. While it was a heartbreaking finale that came down to the final minutes of the final round, Cardoso notes that the season was important to him. He fought through some injuries and made 13 appearances with Internacional.

Next season he will turn 20 and he expects more from himself and his ability to contribute to Internacional’s title push.

“It was my first entire season playing professionally,” Cardoso explained. “I definitely feel that I have improved my overall game, gained a lot of experience. I seized the opportunities to play, gave my best and that helped me a lot. I expect this new season to happen the same way, I want to play and contribute with my best performance. I am excited for what the next season holds for me. I am confident and will continue to work for more opportunities, to use my skills in the field. I expect another bright season and look forward to it.”

At the Campeonato Gaúcho, Cardoso has been a regular starter. On March 4, he scored his first professional goal in a 3-1 win over fourth-tier Pelotas. But despite his role in this tournament, the club felt it was appropriate to release Cardoso to play for the United States U-23 team in Olympic qualifying and miss games in the Gaúcho.

“The club and I had a conversation, and we concluded that coming would be beneficial for both of us,” Cardoso said. “Playing here is important for me, it’s good for my career and I am committed to give my best whether here or playing for the club. But we thought through together and opted for my coming to the national team.”

Playing for the national team these days is extremely important to Cardoso. Following his first appearance with the U-23 team in November 2019, he was motivated to improve his English so that he remain in contact with his U.S. teammates between camps and communicate with them on the field. 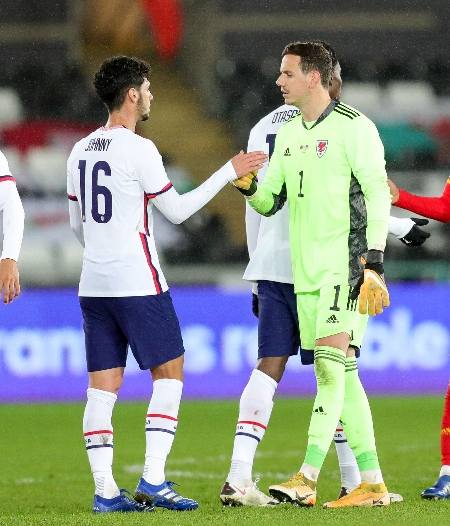 “I do keep in touch with them,” Cardoso said of his relationship with U.S. players. “I want to keep up with everything that is happening here with them and that’s also good for my English skills. Since I was first called to play my English has gotten way better. I am taking classes during the week and also playing and spending time with the teammates only makes it better.”

For Cardoso, he hopes that this Olympic qualification will only be the start for his international career in major competitions. At just 19, he was eligible for the current U-20 World Cup team prior to its cancellation and is also eligible again for the U-23 team in 2024.

Following this tournament and possibly the Olympics in Tokyo, Cardoso has his eyes on returning to the full national team. His first cap in November was a personal milestone and playing alongside players like Tyler Adams, Gio Reyna, Weston McKennie, Yunus Musah, and Sergino Dest was particularly eye-opening and made him extremely optimistic for the team’s future. 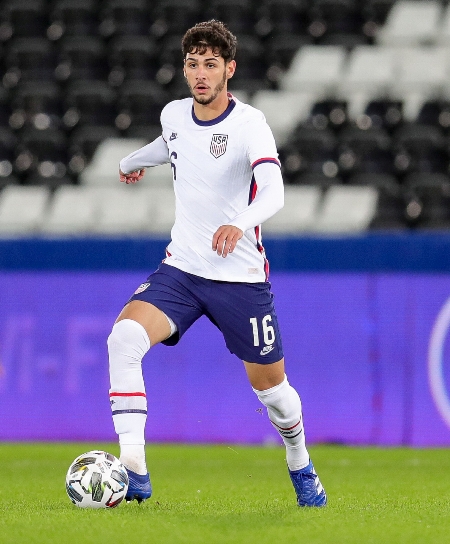 “Well, it has always been a dream playing for the senior team,” Cardoso said of his debut. “I sought learning from the more experienced players the best I could, as well as with the different method Gregg has, learning from all the team and the staff. I think that helped me a lot and I will take it with me on and off the field to improve my career even further.”

“It’s the start of an incredible work done by the national team and the players have been demonstrating time and time again elite soccer,” Cardoso added on the current generation of American players. “It will surely be one of the great national teams.”