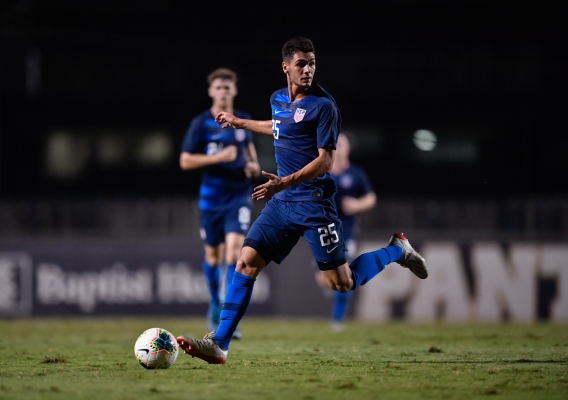 Johnny Cardoso was born in New Jersey and grew up in Brazil. Recently he made his debut for one of South America's biggest clubs at just 17 years old and impressed teammates in his U.S. debut with the U-23s. ASN's Brian Sciaretta spoke with the defensive midfielder
BY Brian Sciaretta Posted
October 30, 2019
10:00 AM
WHEN PLAYERS enter into their late teenage years, things can happen very quickly. It is at these ages where players sometimes get their first tastes of national teams, sign their first professional contracts, or make debuts with their club’s first teams.

For Johnny Cardoso, 18, the past two months have indeed been a wild ride. In September he made his first team debut for Internacional, one of the biggest clubs in Brazil and in all of South America. Then in October, he received his first international call-up when he was named to the roster for the United States U-23 team for a camp in Miami.

Born in Denville, New Jersey, Cardoso has spent only limited time in the United States. He returned to Brazil before his first birthday and his visits to the United States have been rare – although he made a recent trip to see his uncle in Ft. Lauderdale earlier in the year.

Cardoso’s name was the biggest surprise on Jason Kreis’ roster since he grew-up in Brazil and there was no public indication he was on the radar for any U.S. youth national team. But he took advantage of the opportunity and made the most of it.

“It was such a special opportunity in my career,” Cardoso said from Porto Alegre through an interpreter. “It’s the result of work I have been building at Inter that was awarded with the opportunity to represent the national team. I was very surprised with the quality of all players in the team. I have had a very good experience with the team, with a lot of learning from Jason. It was indeed a very good experience.”

Entering into this camp, Cardoso faced a lot of challenges beyond what many other players go through. For one, he knew none of the players, coaches or staff before he arrived. He was also the youngest player on the roster - he is actually playing up a U-23 cycle as he is age-eligible for the 2024 Olympics and the U-20 team for the 2021 World Cup. Finally, he is not only unfamiliar with the United States, he is also not yet fluent in English. During trainings, he did his best with English but was aided at times by the team’s coordinator for translations into Portuguese.

Playing in his preferred position as a No. 6 defensive midfielder, Cardoso made his formal U.S. debut when he came on as a second half sub when the United States defeated El Salvador 6-1. His performances left his teammates impressed.

“I think Johnny is a very talented younger player,” said midfielder Chris Durkin who plays at St. Truiden in Belgium. “You can see he has something different with his Brazilian technique. I know he struggled a little bit with the language but I think he could be a serious prospect.”

Winger Jonathan Lewis agreed with Durkin that Cardoso impressed in camp and was particularly impressed with his ball-winning ability in the No. 6 position.

“Johnny was a hard worker and he was strong in the tackle,” Lewis said. “Being the youngest in the camp he really showed a maturity that a lot of young players don’t have at that age. He has a very bright future and I can’t wait to see how he develops.”

It is certainly not rare to have players on the U.S. national team or youth national teams who either born or raised in another country. But typically those places have been in Europe in countries such as Germany, Holland, or England. Cardoso’s background growing up in Brazil is certainly unique.

The process of bringing Cardoso into the U.S. system began with a call in September from U.S. national team manager Gregg Berhalter who Cardoso believes was tracking his progress at Inter through a scout. He received a message from Berhalter through WhatsApp and was soon surprised when he realized he was talking to the U.S. team’s manager.

“He contacted me and first asked me how I was doing here at Inter,” Cardoso said of his call with Berhalter. “He then how many matches I had played already, how I was training and how I was performing in my matches. He then asked me if I had interest in representing the US national team. I said yes, without any doubt.”

Heading into his first U-23 camp, Cardoso hit another career milestone when he made his first team debut for Inter on September 15 when he came on as a 75th minute substitute during a 3-1 away win over Atletico Mineiro. He has since gone as an unused substitute several other times for the club which currently sits in fifth place in Brazil’s Serie A.

“My debut was very good,” Cardoso recalled. “It was a sensational experience that I think every player wants, to be on the professional team. And debuting at my age, 17, was very important to me and yes, I hope to have more opportunities to play.”

While the past two months have seen him reach many milestones, the upcoming year could produce even more. When asked about the possibility of playing for a Brazilian youth national team, he politely adds that decision will be made later.  For now, he is focused on making more progress at Inter and continuing to earn call-ups with the U.S. teams. To help him prepare, he is making extra efforts to study English so he can communicate better at future camps.

Since the U-23 camp ended, he has also maintained contact with some of the teammates he met for the first time in Miami including PSV Eindhoven midfielder Richard Ledezma who was quick to point out that Cardoso should be at the front of the upcoming U-20 team for whoever coaches that team after the departure of Tab Ramos.

“Johnny is a very smart player,” Ledezma said. “He’s a true No. 6. He can turn, play balls in behind – he’s just a perfect No. 6 to me. But the thing I liked most about him is how calm he has on the ball. If I were the U-20 coach I would definitely bring him in.”

At the moment, Cardoso is back in Porto Alegre hoping his performances at Inter open more doors. And he now knows that people are watching him back in the country of his birth and the country he might continue to represent on the international stage of his sport.

Despite his limited connection to the United States growing up, representing its national team is something he is honored to do.

“We always dream with these goals,” Cardoso said. “Of course, it was always a dream and I was very happy to represent the team. It was a fantastic experience."