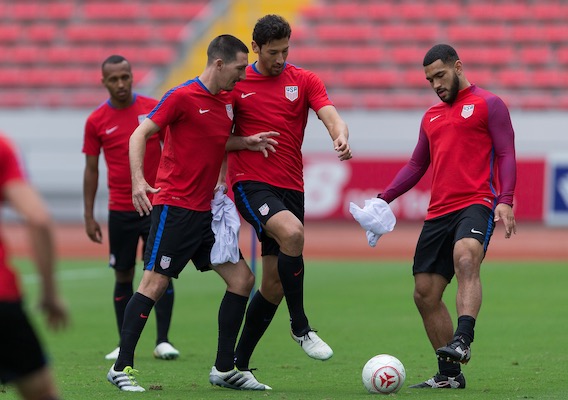 Cameron Carter-Vickers Is Ready to Take Next Step

The 19-year-old central defender will get his second shot at a U-20 World Cup quarterfinal Sunday morning, and the Tottenham product believes he and his teammates have what it takes to advance.
BY Brian Sciaretta Posted
June 02, 2017
7:00 AM

CAMERON CARTER-VICKERS is without a doubt one of the top teenage prospects in American soccer and this Sunday he will play in his biggest game yet for the United States when it takes on Venezuela in the quarterfinals of the U-20 World Cup.

This game will carry extra motivation for the 19-year-old England native. Two years ago Carter-Vickers starred on the U.S. U-20 World Cup team that progressed to the quarterfinal round, where it ran into a highly talented Serbian team. The teams battled to an enthralling scoreless stalemate and were forced to go to penalties. Carter-Vickers missed his attempt over the bar, Serbia advanced, and ultimately won the U-20 World Cup.

Now back at the same stage two years later, Carter-Vickers believes he has unfinished business.

“I still remember the feeling from the Serbia game and how disappointed I was and how disappointed the whole team was,” Carter-Vickers told American Soccer Now from South Korea. “If we can get one step further or two steps further into the final, that would be massive.”

Carter-Vickers is embracing his role as a veteran leader. Many of the top European-based American players were not released for this U-20 World Cup but head coach Tab Ramos indicated that Tottenham were actually quite eager to let Carter-Vickers participate and play in important games.

Ramos was understandably pleased to have Carter-Vickers back with the U-20s.

"At the last World Cup, he was playing for the Tottenham U-23s, sometimes for their Under-19s,” Ramos said. “At times, he was captain of the U-23s, so he was starting to make progress. Obviously, this time around, he's been on Tottenham’s first team and obviously Tottenham is one of probably the top ten teams in the world today so that's a great place to be. He's playing with amazing players every day. Unfortunately, because of that, he hasn't been able to play as many games as he played the year before. So he's gone from playing anywhere between 40-55 games in a year to now playing only 10 or eight—and that's difficult for a young player.

“Tottenham has been great with us, because they feel like the physiological part of the game is really important and Cameron is happy when he comes with us and he needs that. He needs the 90-minute games and so that's helped him.”

Carter-Vickers agreed: “Obviously as a football player you want to play games but training at Tottenham with world-class and international players is always sharp. It's always hard. I was just injured before I came here but I came here in good shape and managed to stay sharp.”

The tournament has been a little slow for Carter-Vickers so far. Due to his recovery, he was unable to participate in the opening 3-3 draw with Ecuador. He put on a first-rate performance in a 1-0 win over Senegal in the second game, partnering with team captain Erik Palmer-Brown in central defense. When asked about playing with both Miazga and Palmer-Brown at the past two World Cups, Carter-Vickers enthusiastically volunteered that “they're both great players.”

But after impressing against Senegal he was sent off in the first half against Saudi Arabia after a controversial second yellow card. As a result he was suspended for the round of 16 match against New Zealand, a 6-0 win for the Americans.

Against Venezuela, he is once again slated to take big role in a familiar stage. But taking time to compare the current team with the one he was on two years ago, he notices the similarities and the differences between both teams.

“I would say one thing that both teams have in common is the team spirit,” Carter-Vickers said. “Both groups got along really well off the pitch and that helps when you have to get on the pitch and play. It's very important when you go to tournaments like this and you're together for over a month. It's really key to how you play on the field. In that regard, the two teams are very similar

“For me, I would say the first World Cup went by really quick,” he added. “It was my first time and it was really exciting. This time, I feel like I have had time to step back and take everything in. I feel like with my experience and what I've learned from the last World Cup can help me help my teammates to win games.”

Both Tottenham and U.S. Soccer see a bright future Carter-Vickers and he could make significant progress sooner than later.

This past season Carter-Vickers made four first-team appearances in cup matches but did not appear in a Premier League game despite making the bench 16 times. Tottenham coach Mauricio Pochettino said last week, however, that Carter-Vickers was one of three young players that will play more of a role with the first team next season.

Beyond that, there is also the full U.S. national team. Last November, Carter-Vickers earned his first national team call-up for a pair of World Cup qualifiers but did not participate. Technically, he is still eligible to play for England but he remains focused on the U.S. team right now.

It is unclear where he stands under new U.S. coach Bruce Arena but impressing at the U-20 World Cup and playing for a strong Tottenham team will certainly make an impact. Carter-Vickers is hoping to make that jump again soon.

“Obviously that's the aim,” Carter-Vickers said of the full U.S. team. “All the work you do back at your club, or tournaments like this, or trying to qualify for the Olympics. That's the big goal at the end. Any player would want to aim toward playing for their national team. It was disappointing for me to see Jurgen go because he was the one that gave me my chance. But I think Bruce is a great coach and the team is back on track winning games again. And that's a good thing for everyone involved.”

What matters most right now is Sunday’s game against Venezuela which will be a very difficult test for the U.S. Venezuela has won all four of its games so far at the U-20 World Cup, outscoring opponents 11-0.

Still, Carter-Vickers likes his team’s chances to surpass the 2015 team and book a spot in the semifinals.

“We have a very athletic team,” Carter-Vickers said. “We are all willing to work hard and sacrifice for each other—which is a great thing. Really, I just think that if we can keep our focus for 90 minutes or 120 minutes if it goes to extra time, limit the amount of mistakes we make, and stick together, then we'll be good “