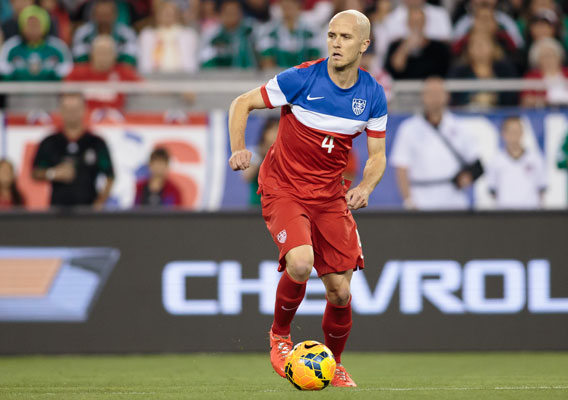 Build It Around Bradley: A World Cup Roster Solution

American Soccer Now's Brian Sciaretta has once again updated his 23 choices for Brazil, and yes, the Mexico match influenced his thinking and his selections. See for yourself below.
BY Brian Sciaretta Posted
April 04, 2014
10:16 PM
THE UNITED STATES NATIONAL TEAM may have walked off the field at University of Phoenix stadium feeling slightly dejected after squandering a two-goal lead against Mexico. But Jurgen Klinsmann and co. can take heart knowing they did not waste an opportunity to learn new things about the team. The most significant takeaway? The U.S. needs to build the midfield, or maybe even the whole team, around Michael Bradley. Whenever Klinsmann has a personnel or formation or tactical decision to make, he should figure that whatever helps Bradley out the most is probably the best option. For example, there's no question that Jermaine Jones' resume surpasses those of other American players. But Kyle Beckerman brought out the best in Bradley, at least for the first 45 minutes on Wednesday. The chemistry was there and it most definitely could lead to either a Bradley-Beckerman partnership in Brazil or a different role for Jones where he has to plays strictly in the defensive midfield similar to Beckerman. That is something that could be explored heavily in the send-off series Another lesson: The 4-4-2 formation is a viable option moving forward. On the few occasions where Klinsmann has started a game with the 4-4-2, it has worked out. Fans may recall the success the team had with the 4-4-2 in a friendly win over Slovenia in 2011—and then wonder why the team abandoned it.

The argument in favor of the 4-4-2 also centers around Bradley. While Klinsmann has preferred the 4-2-3-1 formation for most of this World Cup cycle, the configuration constrained Michael Bradley with limited space and two more lines in front of him. When Bradley is playing the central attacking role in a 4-4-2, he thrives with the freedom to attack and makes excellent use of the space. Klinsmann learned something else against Mexico: His central defense pairing may not be up to snuff—especially Omar Gonzalez. The Los Angeles Galaxy defender was partially at fault for both Mexican goals, and Jurgen Klinsmann might explore other options in the middle. This might result in either Clarence Goodson moving off the bench and into the starting lineup or Geoff Cameron moving centrally from right back. On the other hand, Michael Parkhurst had a very strong game at left back. His versatility allows him to play all across the backline, and I now believe he is not only on the inside track to reach Brazil, he could very easily be a starter. His stock skyrocketed after the Mexico game. CLICK HERE TO CREATE YOUR 23-MAN WORLD CUP ROSTER Also, of note is the very strong play of Chris Wondolowski, who may have done enough to surpass Eddie Johnson for one of the last roster spots. Yes, Johnson scored a goal that was wrongfully disallowed, but Wondolowski simply played better and was so much more than a mere poacher (which has been his reputation). In addition to his goal, the San Jose Earthquakes striker combined well in the midfield, moved well off the ball, and was part of a dominant American performance during the first 45 minutes. Aside from Johnson’s nice finish on the goal he should have been awarded, Johnson too often drifted out wide and took himself out of the action. So Klinsmann may have seen his team blow a dos a cero lead, but the learning experience was more valuable than anything that could have shown up on the scoreboard. Here are my up-to-the-minute selections for the 23-man World Cup roster, starting with a few definitions. Lock: Barring an injury, this player will go to Brazil.
Near Lock: It would take an unusual dip in form for this player to be left behind.
Safe Bet: The odds are in this player’s favor of going to Brazil but it wouldn't be stunning if he was left behind.
In a Battle: While on the inside of the bubble, this player is in a dogfight for his spot in Brazil. It can go either way at this point.

1) Tim Howard: Lock
2) Brad Guzan: Lock
3) Nick Rimando: Lock IN THE MIX: Sean Johnson, Bill Hamid, Tally Hall, Cody Cropper Notes: All three goalkeepers are very good and I'm sure Klinsmann does not give much thought to this part of the team.

4) Fabian Johnson: Lock
5) Geoff Cameron: Lock
6) Matt Besler: Near Lock
7) Clarence Goodson: Safe Bet
8) Omar Gonzalez: Safe Bet
9) DaMarcus Beasley: Safe Bet
10) Michael Parkhurst: Safe bet IN THE MIX: Brad Evans, John Anthony Brooks, Edgar Castillo, Tony Beltran, Tim Ream, DeAndre Yedlin NOTES: What's most interesting about the best American defenders right now is that several of them can play multiple positions. Parkhurst slots in anywhere on the backline without a hitch. Not only is he a big ingredient to the Columbus Crew’s strong start, but he was terrific against Mexico. In fact, while Parkhurst was playing left back, Mexico did not have one good scoring opportunity on his side of the field. It’s easy to be bullish on Parkhurst’s stock now at either fullback position. If Parkhurst can play well at fullback, it would give Klinsmann the opportunity to finally move Geoff Cameron into central defense. While Cameron is playing right back for Stoke and the U.S. out of necessity, both Cameron and Klinsmann agree that that his best position is in central defense. Similarly, Fabian Johnson is also able to play each fullback position well, which provides Klinsmann with more options.

11) Michael Bradley: Lock
12) Landon Donovan: Lock
13) Jermaine Jones: Lock
14) Kyle Beckerman: Near Lock
15) Graham Zusi: Near Lock
16) Alejandro Bedoya: Safe Bet
17) Brad Davis: In a Battle
18) Mix Diskerud: In a Battle
19) Julian Green: In a Battle
IN THE MIX: Maurice Edu, Sacha Kljestan, Brek Shea, Joe Corona, Benny Feilhaber, Luis Gil, Jose Torres NOTES: Unlike previous editions of this 23 Tickets series for American Soccer Now, I've included one fewer defender on the roster—because of the aforementioned versatility of the backline—and one additional midfielder. If whatever is best for Bradley really is best for the national team, that means a potential first-choice pairing with Beckerman and a 4-4-2 formation which gives Bradley room to roam. Brad Davis could also be seen as a surprise inclusion but there is a need for a natural left-footed midfielder. It's an attribute that is extremely scarce in the national team pool and Davis is one of the few options who fits the bill. As for Julian Green, it's clear that Klinsmann rates the talented youngster highly. It's unlikely that Green would start a game in Brazil, but judging by Klinsmann’s comments, it seems like Green has a strong chance at going to the World Cup and might be a spark off the bench if he plays well in the three send-off games.

20) Jozy Altidore: Lock
21) Clint Dempsey: Lock
22) Aron Johannsson: Lock
23) Chris Wondolowski: In a Battle IN THE MIX: Eddie Johnson, Juan Agudelo, Terrence Boyd NOTES: Jozy Altidore and Aron Johannsson are locks. Clint Dempsey is of course a lock and the captain of the team. Most encouragingly he played well against Mexico as a forward in the 4-4-2. His best moment came on the outstanding pass which set up Eddie Johnson’s wrongfully disallowed goal. He was also an important part of the buildup to Chris Wondolowski’s goal. Another consideration is that the 4-4-2 formation could benefit Jozy Altidore as well in that it would give him more service and allow him to combine with another striker. At Sunderland he is too often isolated up the field, but paired with another forward in Brazil, it could allow him to more closely resemble the form he displayed in 2012-13 at AZ Alkmaar. The final forward spot will likely come down to Eddie Johnson and Chris Wondolowski. The other contenders are still a little behind. Juan Agudelo only has one brief substitute appearance with the national team since 2012 and Terrence Boyd has yet to score for the national team. Right now, Wondolowski is just playing very well and is helping the team out in more ways than scoring. It may have taken awhile but his standout play in MLS is finally carrying over to the international game. Brian Sciaretta is an American Soccer Now columnist and an ASN 100 panelist. Follow him on Twitter.