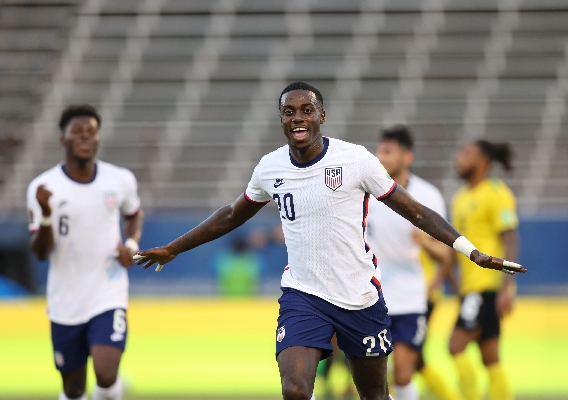 Breaking down the USMNT's 1-1 draw with Jamaica: thoughts & player ratings

The United States national team finished the November window with four points from two games. The players were perhaps a bit disappointed but the team is still on a heallthy pace to qualify. ASN's Brian Sciaretta breaks down the game with his thougths, analysis, and player ratings after a second viewing
BY Brian Sciaretta Posted
November 17, 2021
4:50 AM

THE UNITED STATES DREW Jamaica 1-1 to end its November window and turn the page heading into the final two World Cup qualifying windows in January and March. The game wasn’t pretty and the U.S. team could have done better, but drawing on the road still keeps Gregg Berhalter’s team on pace to qualify.

Meanwhile, Jamaica had its best starting XI featuring Leon Bailey and Michail Antonio. Playing in Kingston, the U.S. team was matched up against the best Jamaica had to offer.

The U.S. team started strong with Tim Weah scoring in the 11th minute. On the play, Weah received the ball in the midfield, played it to Ricardo Pepi. With his first touch, Pepi got the ball back to Weah who moved into the box, got around Bobby Decordova-Reid, and then beat Andre Blake for a 1-0 advantage.

The lead lasted just 11 minutes as Antonio got the ball in the midfield, took advantage of space on the left side of the midfield, and unleashed a 34-yard blast that beat Zack Steffen.

The U.S. team controlled the remainder of the first half but was unable to capitalize.

The second half became very physical. The U.S. still held the possession edge but Jamaica had two dangerous chances, once when Antonee Robinson was lost on a cross and Decordova-Reid sent a shot over the bar. Then towards the end, Jamaica had a goal called back when Damion Lowe was judged to have fouled Walker Zimmerman before his header.

The final whistle sounded with both teams disappointed. The U.S. team failed to take advantage of a big opportunity while Jamaica’s position in the table is in terrible shape as it sits seven points back of qualification.

Here are some thoughts on the U.S. performance. 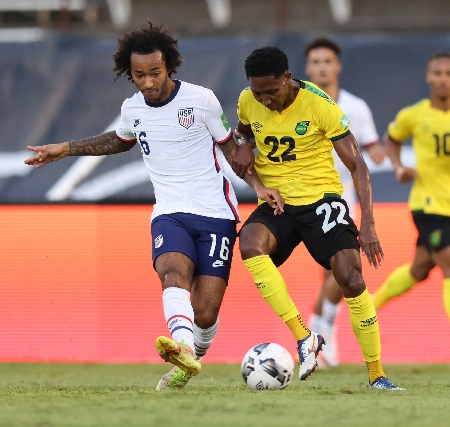 That pressure did not yield nearly enough chances. Heading into 2022, the final ball needs to be there. 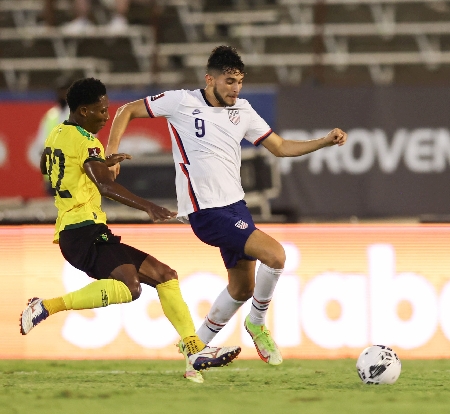 Also, crossing was very ineffective. The U.S. team was credited in the stats as sending in 20 crosses. Only twice were these crosses accurate.

Set pieces are the biggest weakness of the U.S. team so far this entire World Cup qualifying campaign. It is surprising because the team was effective at this in Nations League and at the Gold Cup. In qualifying, there has been no end-product. Last night, the U.S. team had Pulisic, Busio, and Aaronson taking the kicks without any success.

Without Weston McKennie, Gregg Berhalter elected to start two teenagers in a three-man midfield in Yunus Musah and Gianluca Busio. While talented, Jamaica was able to neutralize their talent with a lot of fouls and forcing the U.S. team into trying to win second balls as opposed to having opportunities to dribble.

The midfield structure broke down a lot. Tyler Adams typically likes to get on the ball 80-100 times a game. When he does that, the rest of the team plays better and the other midfielders are able to attack more. Against Jamaica, Adams had just 55 touches and was not able to have the impact in the game he typically does.

Adams had the biggest drop off but then that led to the other midfielders seeing a drop off. Busio had just 66 touches over 90 minutes. Musah had 46 touches over 66 minutes and his replacement, Kellyn Acosta had just 12 over his 24 minutes. 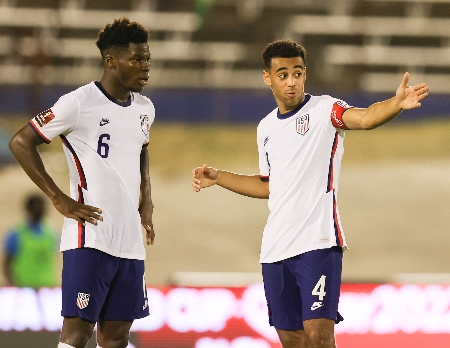 When the U.S. midfielders are not on the ball but the U.S. team is controlling possession, that either means that the defenders touch the ball a lot, the ball was involved in the front three, or the ball is forced out to the wings a lot. Neither Aaronson, Weah, or Pepi had 30 touches, so Jamaica’s pressure was designed to not allow the U.S. team to have an easy time in the middle of the field.

Jamaica finished with 15 pass interceptions while the U.S. team had just four. Yes, the U.S. team should have more since they had more attempts, but Jamaica was able to telegraphy well what the U.S. team was trying to do.

The physical game really hurt the U.S. team’s midfield. If Weston McKennie played, he could have won more physical battles and helped the team go up the middle.

The wingers and fullbacks couldn’t threaten enough from wide positions to open the game up.

The U.S. team has a favorable window in January but a brutal window in February. Is the U.S. team going to rotate lineups or try to keep the same XI in-tact? Winning the two games at home is absolutely critical to the team’s chances and El Salvador and Honduras are good opportunities where the team should be heavily favored.

Set pieces, better crossing, and winning the physical games are key. One thing 2021 has taught is that only rarely are teams ever going to be completely healthy. Gio Reyna and Sergino Dest should be back from their current injuries (and Pulisic should be fit) but will there be more injuries? 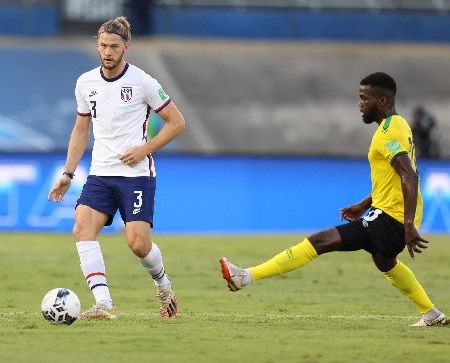 The U.S. team has done well this qualifying campaign considering that it is sending out starting XI’s with average ages often under 23 and none of the players having been through qualifying before. It’s learning on the fly.

The good news is that it is far more likely that the U.S. team continues to improve as opposed to regresses. But limiting mistakes and finding ways to make big plays is what typically determines qualifying or not. 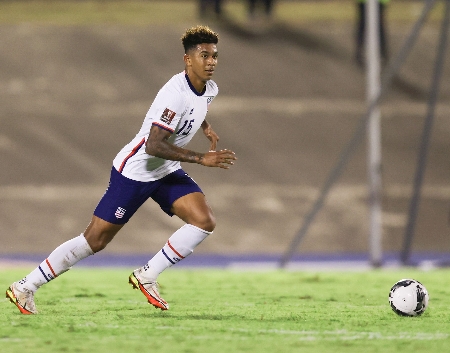 Zack Steffen: The Manchester City goalkeeper allowed a shot from 34-yards and while it was a brilliant shot, Steffen’s positioning could have been better. He wasn’t forced into any big saves and made a few mistakes in the second half with his distribution and decision-making to leave his line. He did make a few nice clearances off crosses and set pieces. Rating: 5.0

Antonee Robinson: The Fulham-based left back had a tough game and was lucky Decordova-Reid didn’t score after he got past Robinson. His passing just wasn’t there. Rating: 4.5

Chris Richards: The Hoffenheim central defender did well to cover for Antonee Robinson, who was typically pushed deeply into the attack. He had a few suspect moments but generally acquitted himself well. Rating: 6.5

Walker Zimmerman: While some of his long-balls weren’t accurate, Zimmerman’s aerial ability was important to team’s defense as he won 7/10 duels and 6/8 aerials, and had four clearances. Jamaica was sending balls into the box and Zimmerman regularly did well to defend them. Rating: 7.0

DeAndre Yedlin: While his crossing was also lacking, Yedlin was solid defensively and made no major mistakes. Rating: 5.5

Tyler Adams: It was a tough assignment for Adams who far more defensively inclined than the other midfielders. He broke up players but didn’t get on the ball nearly enough. When he did, he did well and had a nice range of passing. Rating: 6.5

Gianluca Busio: His first World Cup qualifying start, Busio had a nice shot from distance and was on the ball more than all of the other midfielders. He set up two chances and his passing range was sharp. Rating: 7.0

Yunus Musah: It was a strong start to the game for Musah but he faded a bit (and it was later revealed he had strep throad). He’s a threat off the dribble but had some tough turnovers too. Rating: 6.0

Brenden Aaronson: The Salzburg attacker was good in the press to limit Jamaica’s possession. His final ball wasn’t there but he was aggressive every time he was is possession. Rating: 6.0

Tim Weah: The Lille attacker had a fantastic goal when he blew through the Jamaican defense. He tired but is strong start to the game gave the U.S. team and edge and the lead. Rating: 7.5

Ricardo Pepi: The FC Dallas forward need to get the ball more for shots – he had just two shots which were both blocked. He worked well with Weah on the goal for the assist. Rating: 6.0

Kellyn Acosta: The Colorado midfielder added some bite to the midfield late. Rating: 6.0

Christian Pulisic: Pulisic came off the bench and battled hard, drew a bunch of fouls. His set piece delivery didn’t improve the U.S. team’s struggles but Pulisic helped to keep Jamaica on their back foot. Rating: 6.5

Jesus Ferreira: The FC Dallas attacker only had two touches but one of them was a dangerous ball into the final third. Rating: NR