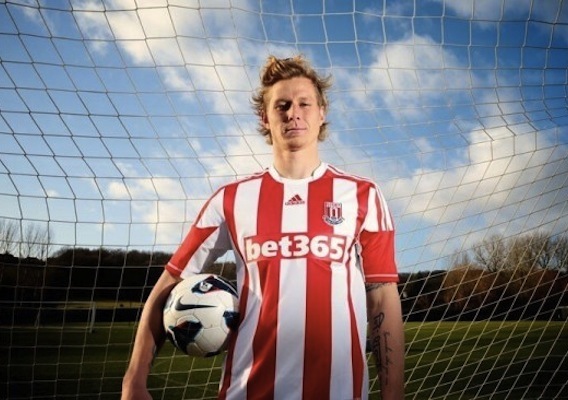 While most American soccer supporters are looking ahead to the Hex, Josh Deaver looks back at the week that was for players listed in the ASN 100.
BY Josh Deaver Posted
February 04, 2013
5:39 AM
Michael Bradley—ASN rank #1
On Friday, Bradley once again received the start for Roma, playing 90 minutes in the club’s 4-2 loss against Cagliari. Following the match, Roma manager Zdenek Zeman was fired as the team has gone winless in five straight matches, falling to eighth in the Serie A table. The move has been rumored for some time, and now with a new manager arriving Bradley will be forced to prove his worth just as he had established himself as an every week starter under Zeman. Fabian Johnson—ASN rank #6
After missing last week with an injury, Johnson made his return to Bundesliga action over the weekend, playing 90 minutes for Hoffenheim in the club’s 2-1 victory over Freiburg. The win delivered a vital three points as the club currently sits in 16th, only two points clear of the drop zone. Although early German reports indicated that Johnson was only participating in “light jogging” during training, his return to action indicates he should be available for Jurgen Klinsmann during Wednesday’s opening World Cup qualifier against Honduras. Timothy Chandler—ASN rank #10
After more than two years of uncertainty, ASN contributor Brian Sciaretta revealed this week that Chandler will accept a call-up to the U.S. men’s national team for its match against Honduras on Wednesday. If he does so, the match will tie Chandler to the United States for his international career. According the ESPN’s Marc Connolly, shortly after sending out the invitation, Jurgen Klinsmann received a text from Chandler that stated, “All good, Coach.” In Bundesliga action on Sunday, Chandler started for Nurnberg and played 90 minutes in a 2-1 victory over Borussia Mochengladbach. Terence Boyd—ASN rank #16
Capping off a lengthy winter break in the Austrian Bundesliga, Boyd and Rapid Vienna took home some silverware in the preseason Atlantic Cup tournament held in Portugal this week. In the final match of the tournament against IF Silkeborg, Boyd netted an 89th-minute winner in a 2-1 victory to deliver the trophy to the Green and Whites. The club returns to league action in two weeks, and is currently sitting in third place, 10 points from the top of the table. Jermaine Jones—ASN rank #18
After serving a three-game suspension for violent conduct, the hardnosed midfielder returned to action for Schalke on Saturday, playing 82 minutes in the club’s 2-1 loss to Greuther Fruth. Jones put in a strong defensive performance for Schalke, who dominated the proceedings before conceding a stoppage time winner to the Bundesliga bottom-dwellers. The loss moves the club to sixth in the table and puts them in a multi-team race for the final spot in Europa league competition. Stuart Holden—ASN rank #23
Only a week after making his long-awaited return to action, the U.S. midfielder suffered a scare this weekend after being forced leave a Bolton reserve squad match with a leg injury. Holden was shaken following a harsh tackle in the first half but was able to leave the field under his own power. Following the match, The Bolton News reported that Holden did not suffer a serious injury and will not require any additional time on the bench. Brek Shea—ASN rank #24
After on-again, off-again transfers talks, the 22-year old Shea completed a move to English Premier League side Stoke City on transfer deadline day. Joining fellow Americans Geoff Cameron and Maurice Edu (currently on loan) on the club’s books, Shea trained with the Potters this week and could see action for his new club after the international break. Mix Diskerud—ASN rank #33
After failing to make the game day roster for the U.S men’s national team match against Canada, Diskerud played in an exhibition friendly for sixth-tier Norwegian side Sjetne, even putting in some time as goalkeeper. Beginning as a joke and the result of a publicity stunt by the tiny club, who had offered to sign the midfielder during his most recent contract talks in December, Diskerud nonetheless enjoyed himself. Currently without a contract, it has been reported that the 22-year old will likely re-sign with Rosenborg for the upcoming season. John Anthony Brooks—ASN rank #72
In a return to 2.Bundesliga action, Brooks started and played 90 minutes for Hertha Berlin in its 5-1 beat down of Regensburg on Sunday. The young centerback continues to impress and this week earned another call up to the German U-20 team, who will play Italy in a friendly on Wednesday. The opportunity comes at an interesting time as the U.S. U-20 team prepares for its World Cup qualification campaign without the six-foot-seven defender. While he has stated his commitment to the U.S. squad, the opportunity for Brooks to participate in the upcoming U-21 European tournament has led to the inevitable questions regarding his international future. Conor O’Brien—ASN rank #79
Following much speculation, the former Sonderjyske midfielder announced this week that he will be moving up the Danish soccer ladder by signing with FC Nordsjaelland. Now at the same club where Michael Pankhurst saw himself break into the U.S. men’s national team, the move is a huge opportunity for O’Brien, who needs a larger stage in order to catch the eye of U.S. soccer. O’Brien began training this week with his new club, and will be looking to earn a place in the lineup before the Danish League returns to action on February 16th. QUICK NOTES
* Former U-23 forward Andrew Wooten continues to see increased minutes for German second division side Sandhausen. Wooten got the start and played 90 minutes in the club’s 3-1 loss to Union Berlin. *Leicester City defender Zak Whitbread is reportedly making “good progress” and should return shortly to the Foxes’ lineup. http://www.herald.ie/sport/soccer/pearson-st-ledger-close-to-a-return-3368414.html Josh Deaver is a former academic turned soccer obsessive. Follow him @USFootballGuy for daily updates.