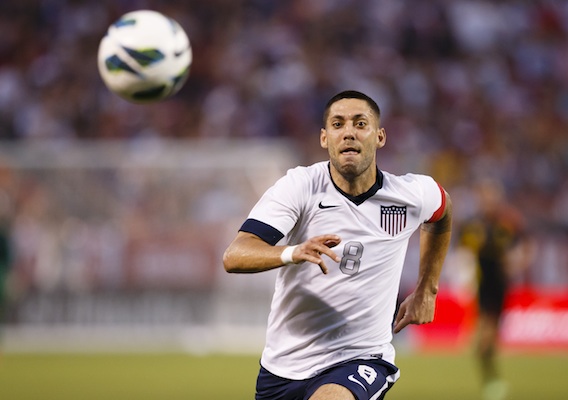 Outmanned and out-hustled for 90 minutes, the United States men's soccer team fell to Belgium, 4-2, in a friendly Wednesday night. Next up for the Yanks: the No. 2-ranked Germans on Sunday.
ASN Slideshow

BY John Godfrey Posted
May 29, 2013
10:33 PM
What is it that separates the United States men’s soccer team from the best teams in the world? A killer instinct. This was on vivid display early in Wednesday night’s friendly against Belgium in Cleveland. Less than five minutes into the match, Clint Dempsey delivered a pinpoint cross to Jozy Altidore, who was well positioned directly in front of the Belgian goal. Rather than taking a first-time shot—which seemed like the clear choice—Altidore attempted to trap the ball and secure a better opportunity. But Altidore’s hesitation, combined with a messy touch, allowed Belgian defender Toby Alderweireld to recover and clear the ball away. The chance was squandered. Less than one minute later, Belgium countered with lethal efficiency. Clarence Goodson failed to keep a high line, and Belgium’s Kevin De Bruyne took this opportunity to find a streaking Romelu Lukaku in the penalty area to Tim Howard’s right. The American goalkeeper made a smart, aggressive save on Lukaku’s shot, but Omar Gonzalez and Geoff Cameron were slow to respond. Belgium’s Kevin Mirallas was not. He pounced on the rebound and lofted the ball into the gaping U.S. net to give Belgium a 1-0 lead. The Americans turned a great chance into nothing. Belgium turned a half-chance into a goal. It looked like a long night for the home team. And it was. Belgium won 4-2, and it could have been much worse. "There’s a lot we can learn from these opponents," U.S. coach Jurgen Klinsmann said after the match. "This is why we play teams like Belgium, like Germany, like Russia, or like Italy—because there’s so much that you can read from those games." "Obviously you want to win them and when you lose them it’s not such a big pleasure, but I’d rather play Belgium 10 more times than El Salvador 100 times because that’s where you learn." The Americans had a few encouraging moments. In the 22nd minute, Clint Dempsey got on the end of a long corner kick and headed the ball across goal. He found Cameron in a dangerous spot and the big fullback headed the ball home to equalize. The 1-1 scoreline flattered the U.S., but it was still a contest. But after the intermission it all went sideways. In the 56th minute, Gonzalez made another gaffe. After intercepting a probing pass from Lukaku, the Los Angeles Galaxy center back decided to get cute with his clearance. Belgium’s De Bruyne was ready for him, however, took possession, and delivered a pinpoint cross to Christian Benteke, who beat a bewildered and helpless Brad Guzan. Eight minutes later, U.S. substitute Terrence Boyd failed to clear a ball in the U.S. zone. Belgium’s Mirallas intercepted, dished to De Bruyne, who crossed to a stampeding Marouane Fellaini. The big-haired Belgian nodded the ball home to give the visitors an insurmountable lead. Beneteke scored his second in the 71st minute to kill the game, but it was over long before then. Belgium was just better in every aspect of the game. The United States missed Michael Bradley desperately. And Jurgen Klinsmann’s crew could have used a little Landon Donovan too. In an embarrassing gift to the home team, the referee awarded the U.S. a terrible penalty late in the match. Replays revealed it was an incorrect decision, but Dempsey put away the spot kick in the 80th minute to add to his impressive national team totals. The questionable sequence had little impact on the outcome, or the mood on the field. In one of the few bright spots for the U.S., Stuart Holden made his return to the national team in the 80th minute, giving American supporters hope that they might find a game-changing attacking midfielder to play alongside the gritty Jermaine Jones and the versatile Bradley. “Great feeling on a personal note just to be back with the national team," Holden said. "As I said, it’s a moment and a thought that had kept me going through my rehab in the sense of walking back out with this group. What it means to be a part of your national team and that feeling collectively was a really special one for me, and something that I’ll treasure and that I won’t forget now as I try to push on and get better.” Holden, not surprisingly, looked very rusty. But in a match that gave American supporters little to feel good about, his return hinted at a better tomorrow. John Godfrey is the founder and editor in chief of American Soccer Now.