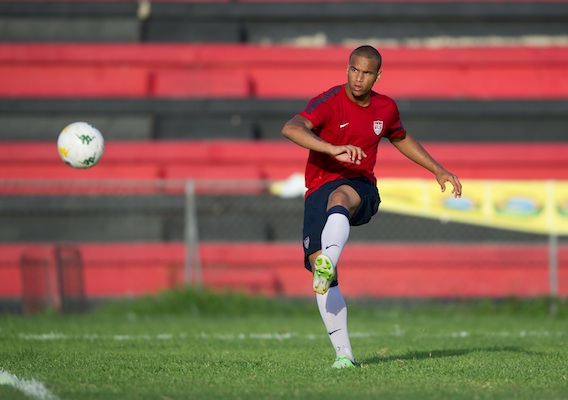 Bedoya and Boyd Get on the Scoresheet in Europe

It’s a Europe-heavy edition of the ASN 100 Update, as American MLSers delivered a fairly disappointing weekend. Blake Thomsen brings you the details, videos, and GIFs.
BY Blake Thomsen Posted
April 23, 2014
9:35 AM
Michael Bradley—ASN rank #1
MB90 returned to the Toronto FC starting lineup in the weekend’s 2-1 loss at FC Dallas. Bradley had been struggling with a minor quadriceps problem for a few weeks. Here’s hoping he stays injury free leading up to the World Cup, where his performance may be the biggest determining factor in how the U.S. fares. Tim Howard—ASN rank #3
Howard shut out Manchester United over the weekend, picking up his 14th clean sheet of the season—he’s now recorded shutouts against Arsenal, Chelsea, Tottenham, and Manchester United this season. Howard now boasts a 76% save percentage, his best for Everton since his peak form of 2007-08 when he was legitimately one of the world’s four or five best keepers. He’s not quite at that level these days, but he’s still in incredible form with the World Cup looming. Jozy Altidore—ASN rank #6
Jozy Altidore found himself out of the U-21 abyss and back in the 18 for Sunderland’s massive game against Chelsea at Stamford Bridge. He came on in the 66th minute and drew what proved to be the decisive penalty in a stunning 2-1 win for Sunderland. It was a dodgy penalty at best, as Altidore appeared to step on Cesar Azpilicueta’s leg and then go down, rather than being actively brought down by the Chelsea left back. Regardless, Mike Dean gave a penalty which Fabio Borini converted to hand Jose Mourinho his first-ever home league loss. It’s ironic that in a season which has gone so poorly for Altidore, this drawn penalty may be the decisive factor in keeping Sunderland in the Premier League. And it also inspired this epic, “Hold me back, bro!” meltdown from Chelsea assistant Rui Faria. Alejandro Bedoya—ASN rank #14
Alejandro Bedoya finds himself back in the ASN 100 Update after another fine goal for Nantes over the weekend. He controlled a pass well before slamming a half-volley into the side netting for his seventh goal of the season. Bedoya’s combination of athleticism, attacking quality, and strong work rate may well give him the inside track for a starting spot in Brazil. Jurgen Klinsmann has to be pleased that Bedoya challenged himself with a move to a solid European league and has emerged as a crucial player for 11th-placed Nantes. Terrence Boyd—ASN rank #24
Terrence Boyd’s current ASN 100 ranking may prove prophetic concerning his place on the U.S. World Cup squad. He currently sits at #24 on the ASN 100, which would leave him as the final player left off the roster for Brazil, and the current train of thought suggests that Chris Wondolowski is probably ahead of him for the fourth striker spot. Still, Boyd won’t go down without a fight in his quest to get on the roster. He notched two goals for Rapid Vienna over the weekend, giving him 11 in the league and 16 in all competitions for the season. With an impressive pre-World Cup camp, he could easily sneak onto the plane. Matt Hedges—ASN rank #81
The 24-year-old center back has played a vital role in FC Dallas’ surprising 5-1-1 start to the campaign. In Saturday’s 2-1 win over Toronto FC, Hedges showed his aerial prowess by delivering a goal and assist off of set pieces. Hedges has impressed this season and should shoot up the ASN 100 charts when the new rankings come out next week. Obviously he won’t be involved with the U.S. national team before the World Cup, but Hedges could certainly see some time with the Klinsmann in the next cycle. For what it’s worth, Matt Besler didn’t earn his first cap until he was 25, so there’s certainly precedent for late-blooming U.S. center backs. Blake Thomsen is a frequent ASN contributor. Follow him on Twitter.