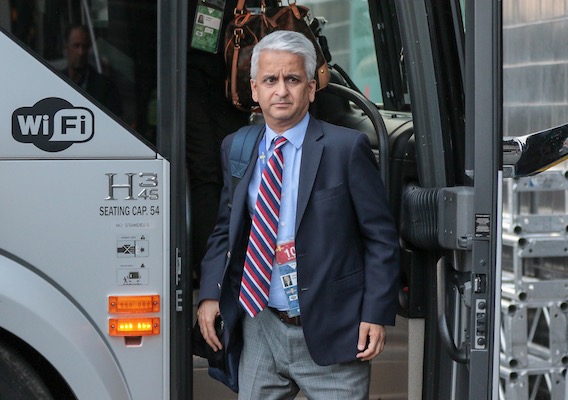 Another look at the USMNT's collapse, Marsch watch begins, & more

The Ringer had the best piece so far of the U.S. team's downfall and it really showed how failed leadership can sink a team. Elsewhere, Jesse Marsch is being linked with a huge move and Jonathan Bornstein moves to Israel.
BY Brian Sciaretta Posted
June 06, 2018
5:25 AM
THE UNITED STATES is not going to the World Cup but big news surrounding the American soccer and the U.S. team continues to circulate, including details about the ill-fated qualifying campaign, the 2026 bid, and more.

Marsch on the move?


The German publication Bild is not the most reliable but where there is smoke there is usually fire. And right now there is a lot of smoke around the idea that Jesse Marsch might leave his post as the Red Bulls head coach and move to Europe. Bild suggested the RB Leipzig gig with others have hinted at the Red Bull Salzburg.

It is easy to understand the appeal of Marsch as he’s probably the best young American born and raised coach in the game right now. Leaving now, in the European preseason, makes the most sense for Marsch the position might not be available after the upcoming MLS season.

This would be huge news for American soccer. Never before has an American coach left MLS and taken a first-team job in Europe and the Red Bull soccer brand is ambitious around the globe. Interest in Marsch shows a lot of faith in him and his ability to handle a European environment.

It is also affects the U.S. national team as Marsch was expected by many to potentially be in contention for the head coaching job there. A move to Europe would essentially take his name out of the running for that gig right now. It could, however, make him a very likely candidate, however, perhaps in four years to guide the team to what the federation hopes would be a World Cup on home soil in 2026.

For the New York Red Bulls, this is yet another disappointment to the team’s supporters. The firing of Mike Petke enraged Red Bull fans. Marsch somewhat miraculously worked past that to become very popular. The loss of Marsch would enrage fans in a different way in terms of its team being a feeder team to the Red Bull teams in Europe – in a similar way to Red Bull II in USL is to the MLS team.

In the modern game, all teams (except for only a handful) are feeder teams. But doing it directly within a common-ownership organization suggests to a club both sends up the common chain without autonomy. A loss of Adams and Marsch within the same ownership will be tough for the Red Bull fans.

As for who would succeed Marsch if he leaves this summer, my best guess is Chris Armas since the former U.S. national team midfielder has worked closely with Marsch for multiple seasons.


For those wanted to look back as to why the U.S. team is not playing in Russia this month, The Ringer really nails it with this comprehensive and well-sourced piece written by Andrew Helms and Matthew Pentz.

It is a harsh indictment of U.S. Soccer in how it got to this point. Everyone talks about the poor coaching and player development, which is true. Everyone knows about the tactical mistakes Arena made against Trinidad and Tobago as well Jurgen Klinsmann’s inability to convey a coherent message which eventually led to a toxic locker room. The player development issues were well chronicled in ASN’s “Missing Years” piece on the development gap for players born from 1990-1994 (who should now be in their prime).

But the person who comes across the worst in the piece is former U.S Soccer president Sunil Gulati. Here were his biggest flaws.

Tunnel Vision: Gulati was completely fixated on hiring Jurgen Klinsmann since before the 2006 World Cup. There seemed to be little consideration to other potential managers challenging Gulati’s determination to hire Klinsmann. It was Jurgen first, and then everyone else as a backup. This was despite the fact there were warning in Germany about Klinsmann’s quality as a manager.

Fear: the decision to extend Klinsmann’s contract and make him the technical director before the 2014 World Cup showed the federation’s strange fear of losing Klinsmann. The federation should evaluate every coach after the World Cup (as it has done in the past) with no fear over losing any one coach.

Lack of decisive decision making: All federations hired bad coaches. Klinsmann was certainly one. He lost the locker room and the players were both frustrated and confused. It was still a fixable problem but Gulati balked when Dan Flynn had to undergo a heart transplant. When the decision fell on Gulati alone, he couldn’t do it. Arena certainly made mistakes but he was dealt a very tough hand two games into the hex and no friendlies (not including January camp) to right the ship. Had Klinsmann been removed when Flynn and Gulati both decided to do so, Arena could have had more time to straighten out the mess.

The new general manager position could help bring these types of decisions into people who are better suited to make them. Hopefully, that position is fully empowered to essentially run the entire men’s program.


Former U.S. national team left back Jonathan Bornstein parted ways with Queretaro in Liga MX. He has been at that club since 2014 and in Mexico since 2011. In 2015, he scored the most important goal in Queretaro history

On Tuesday, Bornstein signed a deal to move to Europe and play for Maccabi Netanya in Israel.