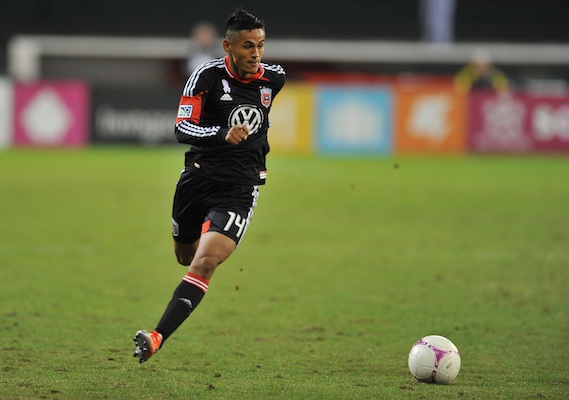 Andy Najar Doubles Up; Jermaine Johnson Gets One

The former D.C. United star tallies twice in a rehab stint with Anderlecht’s U-21 team; Jamaica's athletic forward gives Sheffield Wednesday a boost all by his lonesome; the rest of CONCACAF news.
BY Jon Arnold Posted
April 09, 2013
10:45 AM
The five national teams the U.S. faces during the Hexagonal round of World Cup qualifying include players who play outside CONCACAF. You know how the Americans fared abroad each week, but what about the players they’ll be facing? We’ll keep you updated on their progress each week. Also, don’t forget to check out our section dedicated to all things Hex. We’ll focus first on the United States’ next Hex opponents:

Jermaine Johnson improved on last week’s performance, following up his goal scored with two for Sheffield Wednesday this weekend. He was also booked for his celebration of the second goal and came off in the 84th minute of the 3-2 win against Blackburn. Johnson creates the second goal out of nothing. It’s a nice one. Johnson, along with American Stuart Holden and the rest of Wednesday, play Millwall on Tuesday afternoon. Adrian Mariappa continues to be generally miserable at center back for Reading. He and teammate Jobi McAnuff played the entirety of the Royals’ 2-0 loss to Southampton that all but sealed their relegation fate. Garath McCleary came on in the 62nd minute of the loss. Aalesund and Jamacians Tremaine Stewart and Demar Phillips had a wild match against visiting Honefoss this weekend. Aalesund jumped out to a two-goal lead in the first 15 but conceded three straight. The home side charged back with Phillips putting the winner past American keeper Steve Clark in the 66th minute. Also, read more about the opening goal in the Costa Rica section below, which is why this video is in Spanish. With Nyron Nosworthy out for the year, countryman Lloyd Doyley seems to have taken over his starting spot for Watford. Doyley featured in a scoreless draw between the Hornets and Cardiff. We alluded to a possible Dane Richards loan last week and it came to pass. He joined up with American Zarek Valentin at Bodo/Glimt and made his debut this weekend, coming on in the 61st minute when his new club controlled the match, 3-1, a result that eventually went final. Charlton striker Ricardo Fuller got back on the pitch, starting and going 77 minutes in a 2-1 defeat to Leeds. Rodolph Austin came off the Leeds bench in stoppage time. Theo Robinson was excited to play for Huddersfield Town this weekend against Peterborough but didn’t get the chance. Jermaine Beckford, on the other hand, came on in the 59th minute and was booked in the 62nd. Huddersfield drew Posh, 2-2. Omar Daley still hasn’t appeared for Motherwell since March 2. Missed this last week. Forward Luton Shelton scored for Karabukspor against Kayserispor over in Turkey.

Center back Román Torres and his Millonarios team couldn’t keep Corinthians off the board in Copa Libertadores play. They lost 1-0 Wednesday, but got back on the right side of things by beating Santa Fe 3-1 in league play this weekend. Torres went the full 90 in both contests and was one of seven Millonarios names in the referee’s book in the league match. Junior finally got a win, snapping a four match winless streak. Gabriel Gomez went the distance in the 2-1 win against Cucuta Deportivo. Nelson Barahona played the final 10 minutes of a 2-1 Itagui win against Envigado that keeps his team atop the Colombian table. Over in Venezuela, Rolando Escobar went the full 90 but couldn’t help Deportivo Anzoategui to a victory. Yaracuyanos won 3-1 Saturday. Armando Cooper made his first appearance in more than a month for Godoy Cruz, coming on in the 78th minute of a scoreless draw. Luis Henríquez played all of Lech Poznan’s win Friday.

It wasn’t the best weekend for Wigan, who couldn’t take advantage of an early QPR red card and salvaged a draw that keeps both teams in the drop zone. Maynor Figueroa started the match for the Latics and went 88 minutes, when fellow Honduran Roger Espinoza replaced him. After a rough week, Emilio Izaguirre and Celtic returned to form, thumping Hibernian 3-0. Izaguirre played the full 90. Jorge Claros didn’t appear for Hibs. Carlo Costly didn’t play for Veria the week after scoring a penalty. Osmán Chavez was booked in the first half as his Wisla Krakow team lost 2-1 to Piast Gliwice. Red Star Belgrade won both matches it played since we last met. Luis Garrido started both of them, playing all of a 3-0 win against Hajduk Kula and the first 59 of a 1-0 win against Smederevo. Andy Najar continues his injury recovery and scored twice for Anderlecht’s U-21 team.

Bryan Ruiz performed well, but Fulham was unable to top Newcastle United in the Premier League. The Costa Rican captain went the full 90. Joel Campbell was out of La Liga action this weekend because of card accumulation. Real Betis didn’t need him anyway. It won 5-1 against Granada. Bryan Oviedo was an unused sub for Everton in a 2-2 draw with Tottenham. So too was Keylor Navas, Levante’s back-up goalkeeper. That’s probably for the best this week, with Levante getting rocked by Real Madrid to the tune of 5-1. Celso Borges got back to action in Sweden, playing the full 90 of a scoreless draw between AIK and Syrianska. Diego Calvo was booked in Valerenga’s 2-0 loss at Odd. He and Giancarlo Gonzalez played the full 90 for the visitors. Michael Barrantes scored the opening goal and an assist for Aalesund in a 4-3 win which you read about in the Jamaica section. The video, if you’ve forgotten already: Midfielder Christian Bolaños is still out injured.

Carlos Vela is the central figure in a documentary about Real Sociedad’s reemergence. He marked his return from injury by scoring the opening goal, a rebound he put past the keeper, in a 4-2 win over Málaga.
REAL SOCIEDAD 4 MÁLAGA 2 by acosart Hector Moreno and Espanyol put up a clean sheet on the road, beating Osasuna 2-0. He also contributed to the attack, scoring on a glancing header from a corner to make it 1-0.
Osasuna 0 Espanyol 2 by acosart Chicharito came on as a late sub with Manchester United chasing the Manchester derby. He was unable to score and the Red Devils lost 2-1. It’s not surprising, though, that Sir Alex Ferguson looked to the Mexican striker. He’s made the most of his opportunities this year. No Messi? No problem for Barcelona. The team beat Gio dos Santos’ Mallorca 5-0. Brother Jonathan could be in line for a summer transfer away from Camp Nou, where he rarely plays. He’s been specifically linked with Olympiakos. Meanwhile, Gio might be on the move if Mallorca can’t avoid relegation. Andres Guardado went the full 90 for Valencia in a 2-1 win against Real Valladolid. He again manned the left back spot. Guillermo Ochoa returned to form Saturday, shutting out Sochaux though facing lots of shots. Javier Aquino continues to stomp teams with Villarreal, who followed up its 5-1 win last week with a 6-1 result this week. Aquino went the full 90. Whose performance strikes the most fear in your heart? Have we missed any players who you think should be in the U.S.’ game tape rotation? Any information you’d like to see in future editions? Let us know in the comments section. Jon Arnold (@ArnoldcommaJon) is a writer based in Arizona and is ASN's CONCACAF correspondent.