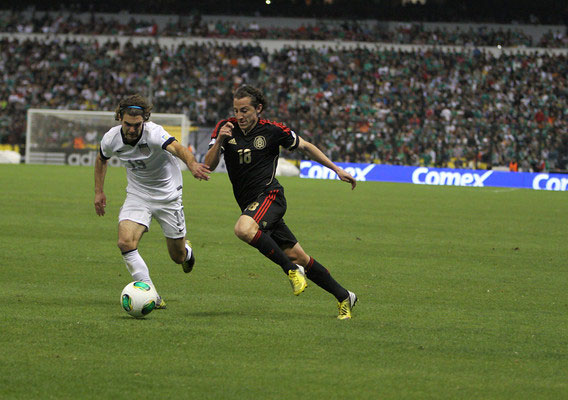 You could wait until after the game to see photos of the first-half action, but that seems very 2008. Here is a quick update on the match and a collection of the best photography. Enjoy!
ASN Slideshow

BY Jon Arnold Posted
March 26, 2013
11:37 PM
Mexico was the better team in the first half, but the United States was able to withstand its attacks in a scoreless first half at the Azteca. The first attack came in the eighth minute when Mexico worked the ball around the outside of the box, but DaMarcus Beasley dispossessed Javier Aquino. Minutes later Beasley was booked for a shove when Aquino won a free kick just outside the box. The resulting free kick was blasted wide by Gio dos Santos. While the Mexicans dominated possession in the first 15 minutes, the U.S. won a corner kick in the 15th. Geoff Cameron had a chance on the header but his efforts were negated by the referee’s whistle for a foul. Matt Besler, starting in place of the injured Clarence Goodson, comfortably passed his first tests, heading several balls clear without trepidation. But he was carded for a push on dos Santos when the Mallorca winger was breaking away. The United States had a sustained spell of possession just after and was able to work the ball for a 24th minute corner. Herc Gomez’s effort, however, was far from a thing of beauty and went out for a throw in on the opposite side. Michael Bradley avoided a yellow card but the Americans allowed Jesus Zavala a free header off the free kick. Brad Guzan wasn’t troubled, nor was he minutes later when Chicharito headed a beautiful cross from Jose Torres Nilo over the bar. After a long stretch with not much action, Dempsey broke up the middle and worked a move with Michael Bradley and Jozy Altidore, but Bradley’s touch was too heavy and Torres Nilo cleared the chance. Guzan was tested again in the 43rd minute, coming off his line and clattering into Zavaleta after a Carlos Salcido through ball dangerously hung in the box. Guzan was fouled on the play and again kept Mexico off the board. In the second half, the Americans will look to build on the momentum they gathered toward the end of the half and find a breakthrough while continuing to keep the home team off the board.