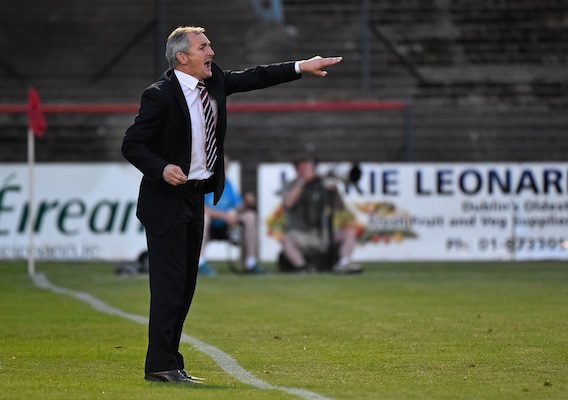 Bob Bradley isn't the only American coaching a top-flight soccer club in Europe. Here is the story of Bronx-born John Caulfield, 49, who is looking to return Cork City FC to its glory days.
BY Brian Sciaretta Posted
August 01, 2014
1:25 PM
JUST A FEW SHORT YEARS AGO, Cork City FC was a club on the brink of collapse. With the Irish economy struggling, many Premier Division clubs in the League of Ireland were facing financial ruin and an uncertain future. Cork City was hit especially hard. Five years ago, Cork City’s holding company was dissolved through bankruptcy and the proceedings carried over onto to the field. The club suffered through a series of disappointing league finishes and in 2010 it was relegated to the Irish second division after it couldn't afford to pay for a Premier Division license. It returned to the top flight a year later but the mood around the team was depressed and the fans and the city lacked hope. Despite scrapping back into the top flight, Cork City had fallen far behind teams like Shamrock Rovers, St. Patrick’s, and Sligo Rovers. It was a low point for a team with a proud soccer tradition. Enter John Caulfield. Born in an Irish immigrant section of the Bronx in 1964, Caulfield returned to Ireland with his parents in 1968. He has a long and storied history with the club and the latest chapter has seen him preside over a remarkable turnaround for Cork City.

When speaking to Caulfield, it is easy to forget that he was born in the United States. His Cork accent is thick and his knowledge of the Irish province of Munster is unparalleled. Still, he does offer hints of his affinity of for the country of his birth. He keenly followed the U.S. national team at the World Cup and has great hope that sport of soccer continues to progress in the United States. He follows MLS around the playoffs and is particularly happy to see Robbie Keane’s success with Los Angeles.

Caulfield is also actively seeking to bring in American players to Cork City. He had two Americans on trial with the club earlier in the season and while they were unsuccessful in earning contracts, Caulfield hopes that the opportunity to play in Europe makes Cork City an attractive option for other Yanks.

“I like the American lads over here because their attitude is brilliant,” Caulfield said. “I’m trying to say to them that we’re a very good stepping stone because English clubs are watching our players.” For now, Caulfield and Cork City are simply focused on the pursuit of the League of Ireland title and earning a spot in the UEFA Champions League qualifying rounds next year. After all that the club has been through in recent years, it would complete a remarkable turnaround. “It was always my ambition to be a full-time professional manager,” Caulfield said. “It’s been fantastic with full-time training with a lot of young players. They have huge ambitions like everyone else to try to get to England because they can get better players and have more money. That’s what a lot of my younger players are trying to do. But for me, coaching here has been fantastic.” “It’s tough and the perception is that we’re still not as strong as the three clubs that are around us right now,” he added. “But we’re still there. If we can keep our feet on the ground and delivering the performances every week, I think we can win it.” Brian Sciaretta is an American Soccer Now columnist and an ASN 100 panelist. Follow him on Twitter.