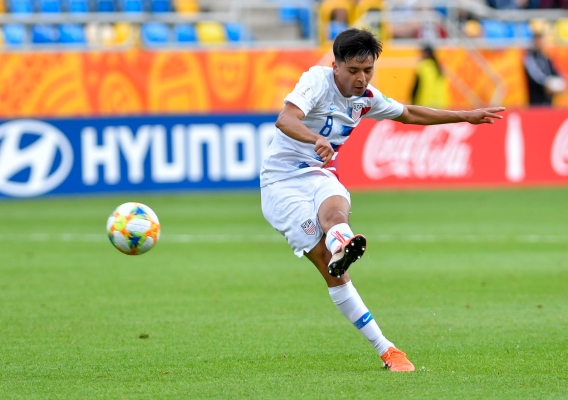 Alex Mendez recently celebated his birthday that marked the end to an extremely productive year. But his 19th birthday kicked off a year which he hopes will see progress at Ajax and a spot on the U-23 team as it looks to return to the Olympics. ASN'S Brian Sciaretta spoke with the reigning U.S. Young Male Athlete of the Year.
BY Brian Sciaretta Posted
September 10, 2019
2:00 AM
THE UNITED STATES U-23 team completed its September camp with a 2-0 win over Japan in Chula Vista, California on Monday night and head coach Jason Kreis is still evaluating players as he looks to put together a team for Olympic qualifying in March. While qualifying for the Olympics is always difficult given just two teams making it out of CONCACAF, there is plenty of reason to feel more confident than in previous cycles.

Even without top age-eligible players like Christian Pulisic, Tyler Adams, Weston McKennie, Sergino Dest, Tim Weah, and Josh Sargent, the depth in the player pool of this age group is promising and is built off the last two U-20 teams which have each won CONCACAF.

Alex Mendez celebrated his 19th birthday at the U-23 team’s camp and for the California native, it has indeed been a good year with plenty to celebrate. At the club level, he moved twice: first to Freiburg and eventually to Ajax. On the international level he won US Soccer’s Young Male Player of the Year for 2018, he helped the U-20 team win the CONCACAF title and advance to the quarterfinals of the 2019 U-20 World Cup.

Following his birthday on Friday, he kicked off his 20th year in style earning the start for the U-23 team in the win over Japan. For Mendez, the Olympics are what he hopes will be the next major step for him on the international stage.

“I think this team is a good team,” Mendez said of his U-23 team. “A lot of the guys who are here are a lot of the guys I recognize from some of the MLS games that I see - guys who have made some great plays and have played well. Some are friends or friends of friends. A lot of the names are very familiar.…It's a great opportunity and I think it would be great to be there at the Olympics. I think it's a good competition and it would be a good next step.”

“The guys are all professional and they all play at a good level,” he added. “All of the guys are good - how I imagined. It's different from seeing the guys on TV or wherever I'm watching them to actually training them. It's exciting.”

This camp was also the first time Mendez has met and played under U-23 head coach Jason Kreis. Kreis had been open with how he scouted the 2019 U-20 team at the World Cup and Mendez is one of six players from that U-20 World Cup team on the current U-23 roster (and Tim Weah and Julian Araujo played for the U-23 team in March while Sergino Dest and Paxton Pomykal are currently with the full national team).

“This is the first time I met him but I have spoken to him before,” Mendez said of Kreis. “The style of play is pretty similar but in terms of tactically in where I should be it's a little different….When I was with Tab, I was used to starting up high and staying in that area. Here it's a little bit of a different role. My starting position is a little deeper. It's just a little different but it's something I have to do under him.”

The most important adjustment for Mendez, however, will come at the club level as he begins his first season in Holland at Ajax – where he moved from SC Freiburg earlier in the summer. The move will reunite him with his U-20 World Cup teammate Sergino Dest, who he sees frequently, and one he hopes will eventually see him promoted to the first team.

For this season, Mendez is expecting to play for its second team, Jong Ajax, but is not limiting himself to that level either (“I think it's Jong Ajax but if the opportunity comes, it comes,” Mendez said of the upcoming season).

But for the smooth passing, attack-oriented Mendez, the move from Germany to Holland was about putting himself in a situation that fits his strengths as a player.

“When I first got there, I was a bit nervous because I didn't know what to expect,” Mendez said. “Just day by day, the whole staff and players have just made me feel welcome. It just helped me get comfortable really fast. And I think that this team is more of my style of play so I feel like I fit in right away.”

For Mendez, it will be a busy year indeed but if his 20th year is as productive as his 19th, it could bring about significant success. For many younger American fans, they don’t recall the last time watching the U-23 team compete in the Olympics in 2008. In its history, the opportunity has often served as a useful bridge for many players to transition from the youth levels to the full team. Combined with the American public’s love for the Olympics, it’s also an opportunity to build enthusiasm for the men’s program.

It is well known that the team has failed in its last two attempts to qualify for the Olympics, but Mendez insists this group is driven to return the program to that stage.

“I think everyone is motivated,” Mendez said. “I think that is what's good about this team and that it's going to go a long way.”