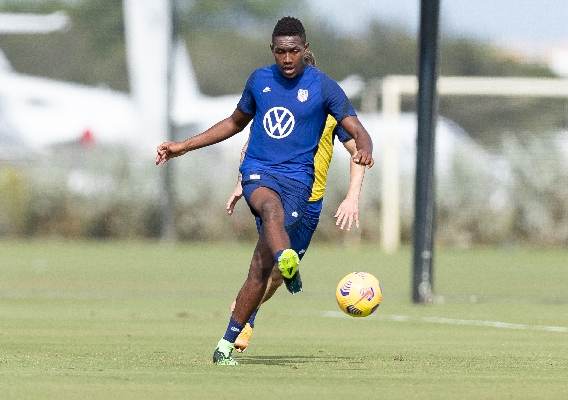 As a young player, Andres Perea was a stalwart with Colombian youth national teams where he featured heavily at the 2017 U-17 World Cup and U-20 World Cup. But the Florida-born duel national is now on the radar with U.S. Soccer after a strong season in Orlando City following a transfer from Atletico Nacional. ASN spoke with the potential U.S. U-23 defensive midfielder from Medellin about Orlando and his pending international decision.
BY Brian Sciaretta Posted
January 04, 2021
10:00 AM

FOR ANDRES PEREA, 2020 was a groundbreaking year where he made many important strides as a player and became a key contributor for a vastly improved Orlando City team that now has a bright future ahead. But with his success, he has both opened the door to important opportunities and put himself into a position where he must make career changing decisions.

Andres Perea, who turned 20 in November, improved throughout the season and by the end was a key contributor for Orlando as a defensive midfielder. In December, Orlando exercised an option the make his loan from Colombia’s Atletico Nacional a permanent transfer.

Perea finished the season 28 appearances and 11 starts for Orlando – but started eight times in October and November as the club was a finalist at MLS is Back, finished fourth in the East, and advanced past New York City in the playoffs before bowing out to New England in the second round.

“I think we have a great group,” Perea said from Medellin where he is visiting family. “I think when you move to a new team, you try to adapt yourself as quickly as possible. I finished this year very happy because I think that I fulfilled objectives that maybe I didn’t think I would meet as quickly as I did.” 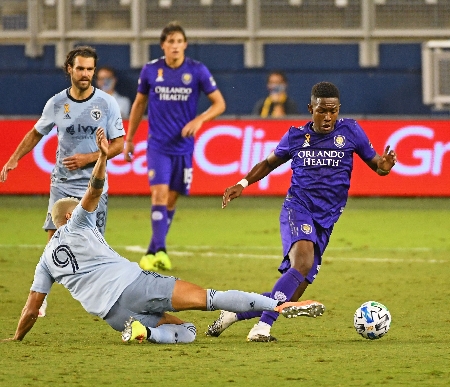 “I think that we have the conditions to be champions,” he added. “This past year we were close, but things happen in football and it got away from us for reasons that are hard to understand. So, we are going to prepare for that, to be champions and I think everyone is aspiring for that dream.”

Born in Tampa, Perea moved to his parents native Colombia at the age of five where he was raised. His father, Nixon Perea, was a former professional player in Colombia and was a youth coach of Atletico Nacional.

After playing with Atletico Nacional’s first team from 2017-2019 where he was one of the top young players in the league at his position, he was pursued by Orlando City where he could play under Oscar Pareja - a former Colombian international and someone with success coaching in the United States while working with young players.

“I had thought that at some point because of my [U.S.] nationality that I could go to the United States. When this opportunity arose, I considered it a good option for me to continue growing both as a person and as a player,” Perea explained. “Oscar has helped me in all aspects of my life, both in sporting and personal… I am a young player and I have to improve, but I am very happy to be there working with them.”

Adjustment into MLS from the Colombian league also went relatively smoothly for Perea, who was recruited by Orlando partly because his physical characteristics matched the style in MLS. As a 6’0” defensive midfielder, Perea has both the physical strength and range to play the position at a high level.

When fitting into MLS, it was different than the Colombian league but one that fit him well as a player.

“The league is very competitive, very physical,” he added on MLS. “It’s fast, it’s strong. I think with my characteristics I adapted quickly. I am a player who can run fast, I am strong, so I think that helped me get used to playing in this league. But it is difficult. Overall, it’s a very good league and it makes me happy to be playing in it and continue improving in this career that I have just started.”

Following the season, another major milestone came for Perea as U.S. Soccer was able to schedule a December camp for the men’s national team and manager Gregg Berhalter called-up Perea. 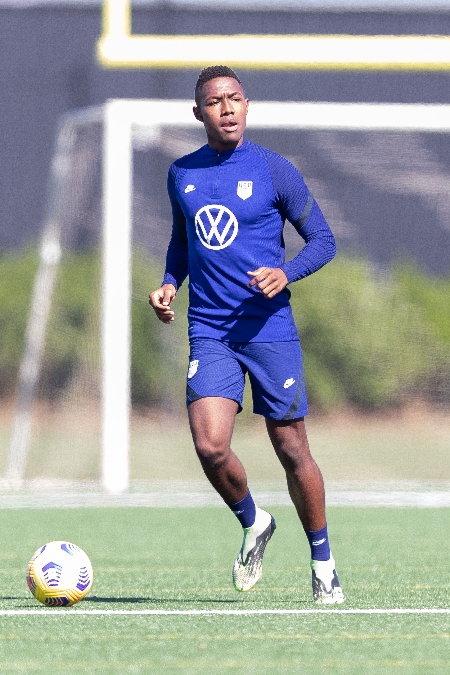 In recent years, however, Perea has been a staple of Colombian youth national teams. He was a starter for their 2017 U-17 World Cup team (which defeated the United States 3-1) and then started every game for the U-20 team during its 2019 U-20 World Cup quarterfinal run.

To play for the United States, Perea would need to make a permanent one-time switch with FIFA but he was free to participate in the camp without playing in the friendly against El Salvador. He accepted the call-up and left impressed while still acknowledging his conflicting emotions. 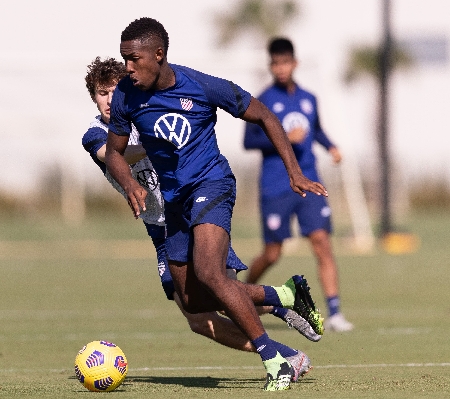 “With the Colombian national team, I experienced many wonderful moments,” Perea explained. “I grew a lot, I learned a lot. Sometimes opportunities arise when you least expect it. When I came to this league, I knew there was the possibility that if I had a good season, I might get a call-up to the U.S. national team… I still have a very strong feeling for the Colombian national team that nurtured me, that made me a part of their family, but it is also a nice opportunity what I experienced in December in the U.S. camp and I hope it can continue to come in the future, so we’ll see what happens.”

“Every player dreams some day of representing their country. I feel very privileged because I know that it is not easy to make it to a senior national team at age 20,” Perea continued. “They have opened the doors to me and other young players that are on the way with a lot of talent. I enjoyed it a lot…I found myself with very good people, good footballers, good professionals. I think I met some great people and I left very happy. The coaching staff, Gregg, they were great with me, so I’m grateful and I have to keep working, keep listening.”

Not lost on Perea is just how good the United States is becoming now with a talented young generation of players based both domestically and abroad. He is very familiar with his Orlando teammates Chris Mueller who was the Man of the Match in the 6-0 win over El Salvador and Daryl Dike who is a top young American forward and was also in the December camp before departing with an injury. 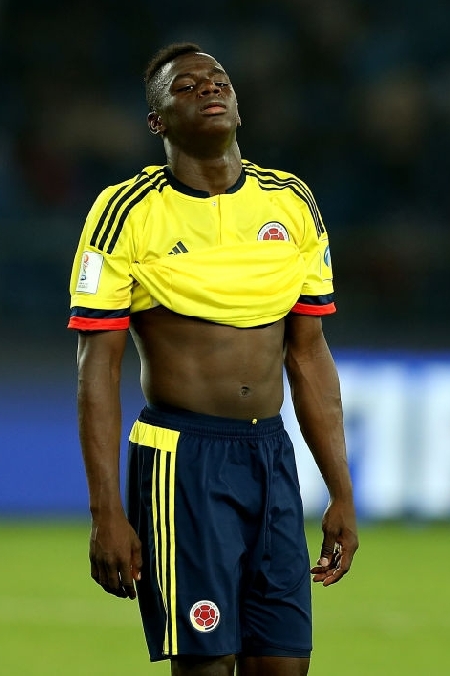 Then abroad, Perea notes how young American players are now regularly part of the Champions League with some of the biggest clubs in the world.

“They are among the best young generation of players in the world,” Perea said. “It is something good for the country, for the league, to see these young players are making such a big difference, like Christian. What McKennie is doing with Juventus is impressive, also Sergino with Barcelona. You have young players who are consolidating themselves in Europe, that is important for the process that is happening in the national team. I think in the World Cup in Qatar, 2026 and 2030, the U.S. will make a big impact because of the generation that is coming. They are young players that like to work, they are good physically and technically and they have everything to triumph.” 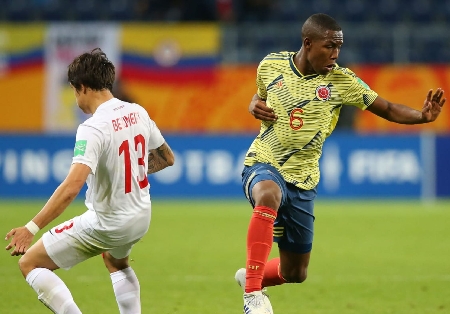 As for whether or not he will join the program, Perea is very close to arriving at a decision. His position on the U.S. national team is currently occupied by Tyler Adams although the depth at the position is still very untested with Johnny Cardoso, Owen Otasowie, and Jackson Yueill also in the mix. But when discussing Perea, Berhalter used words that are similar to Adams, stylistically in a lone-defensive midfield formation.

But there is also a pathway for Perea because if he opts to switch, he would be a strong contender to be the U.S. U-23 starting defensive midfielder for Olympic qualifying in 2021. Further success in Orlando could also see him earn offers from Europe – and many South Americans now view MLS as a place to come before making a transfer to Europe. 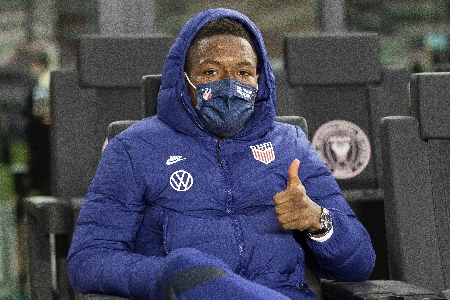 Understandably, Perea is filled with emotions.

“It is a difficult decision,” Perea said. “I played such a long time with Colombia, there is a deep feeling there, but to play for the U.S. would also be very wonderful, so I have had to take my time to decide. The decision is not long away from being made, it’s actually very close.”

“It fills you with emotions for what it means in your career. It’s such a great part of football. All those emotions and opinions, all those things, it makes you take the necessary time to have a cool head to organize your thoughts to make the best decision.”