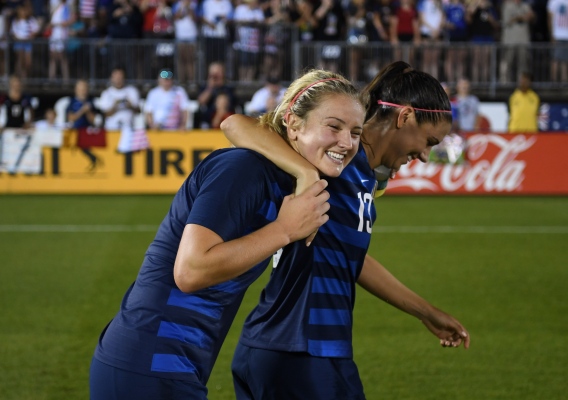 After switch to the midfield, Horan flourishing for Portland & USWNT

Once considered a nice prospect at forward, Lindsey Horan is shining as a midfielder after moving to the position in 2015. ASN's John Halloran spoke to Horan about why she has taken off in this role.
BY John Halloran Posted
August 02, 2018
2:00 AM
THOSE WHO watched Lindsey Horan in her days with the United States’ youth national teams probably remember her posting up in the forward position, leading the line, and scoring goals in bunches.

However, on the senior national team, Horan has made her biggest impact over the past three years as a center midfielder, after head coach Jill Ellis moved her into the position late in 2015.

Since the switch, Horan has flourished, becoming a mainstay for the U.S. and, at the club level, helping lead the Portland Thorns to an NWSL title last fall.

Horan admits the change wasn’t easy, but says her childhood coaches helped lay the proper foundation and knowledge of the game to make such a move possible.

“Back in the day, one of my youth coaches always told me, ‘A soccer player is a soccer player,” said Horan, speaking to the media this week at the Tournament of Nations.

Years ago, Ellis looked to make the positional change because she knew Horan didn’t have the pace to get in behind defenses at the senior level, but wanted to find a place to take advantage of Horan’s physicality, creativity, soccer smarts, and passing skills.

“Looking at her passing game, looking at her ability to arrive late into a box—in terms of trailing and getting onto the end of crosses with her head, or picking up balls at the top of the box—that’s what I see as her special qualities,” said Ellis.

“She’s got tremendous range in her passing. She can pick a ball out and change the point for us, or she can thread a little six-yard pass to split players. There’s a lot of playmaking in her.”

Horan, at first, wondered if she could handle the fitness requirements of the midfield position, but eventually settled in with the help of her teammates. And following the 2015 World Cup, when the Americans still relied largely on their superior athleticism to win games, Horan became part of a new generation of U.S. midfielders who were comfortable on the ball in tight spaces and with their back to pressure, allowing the team to play a more possession-based system.

The Colorado native says her time as a forward, playing with her back to defenders, helped develop that particular skill, but also credited her coach at Paris Saint-Germain with really refining that aspect of her game.

“My time at PSG, I learned a lot from my coach because, surprisingly enough, [playing with my back to pressure] was one of my weaknesses there and he really taught me a lot because once you progress to the professional level, it’s not the same,” Horan explained.

“He thought I was terrible at it. Funny enough, he would take me on my own and put me up against a goal post and say, ‘Play with your back to pressure.’ And he pointed out little things that I did wrong,” she added.

“I looked like an idiot, but it helped me.”

Horan says that her dominance at the youth level had also led to some bad habits that she couldn’t get away with at the pro level in France.

“I was playing at the youth level and things worked for me,” she said. “I got away with certain things and then when I went into the professional level, I wasn’t as great, obviously. That was a big change for me and something that I always thought I was good at and I never needed to work on actually needed work.

“That was crucial for me and my development and he kind of just hit me with it right away and I was shocked. But it was awesome that he could see that in me from the very beginning.”

For Portland this season, Horan has put in an MVP-caliber performance and is currently tied for the league lead in goals, despite playing as a deep-lying midfielder. Six of her nine goals in league play this year have come on set pieces with her knack for finding space and finishing chances.

That talent was on display on Sunday in the U.S.’ match against Australia, when Horan got on the end of a Megan Rapinoe corner kick in the 90th minute to help the Americans rescue a 1-1 draw.

Now, the team is headed into the final match of the Tournament of Nations and a chance at the title with a match against Brazil.

For Horan, the goal is simple.

“We want to take home that trophy.”