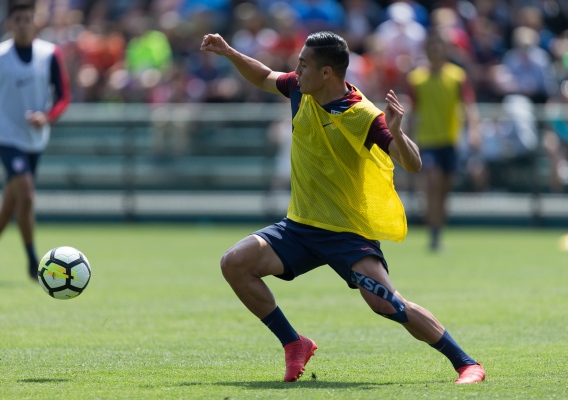 After move to Tijuana, Rubin looks to make a statement with the USMNT

Nearly four years after making his U.S. national team debut, Rubio Rubin has never become a consistent part of the team. But after a move to Club Tijuana where he is playing regularly, he hopes to change that
BY Brian Sciaretta Posted
May 25, 2018
2:30 AM
PHILADELPHIA – When looking at the very young U.S. national team roster assembled in City of Brotherly Love, it is easy to notice how many of the promising youngsters are only just beginning their professional careers. Many have only a handful of first team appearances, two have none.

It can be hard for a player to be thrust into the national team at a time when the professional game is still new to him, but it is a situation which Rubio Rubin can relate.

The Beaverton, Oregon native made his professional debut on August 17, 2014 while playing for Utrecht in the Eredivisie at a time when he was regarded as one of the top rated teenage American prospects. Less than three weeks after that debut he was called up to the U.S. national team for the first time – with his first cap coming in November.

Now, nearly four years later, Rubin looks around and sees a young group of players with whom he can identify.

“It's kind of crazy,” Rubin told ASN in Philadelphia. “The group is really young. It feels different because there are so many guys younger than me. At the same time it is good. It's a good group. There are a bunch of young guys and guys who were in the same situation as me when I was in Europe.”

Of course for Rubin, there were low points in Europe. In his second season in 2015/16, he suffered a serious ankle injury that required surgery to insert a pin. In 2017 he was released by Utrecht and signed with Silkeborg in Denmark. After just three appearances in a half a season, he moved onto Stabaek in Norway where he made seven substitute appearance.

Now 22, he is getting his career back on track. Earlier this year he signed for Club Tijuana in Mexico and over the course of the team's run to the Liga MX Clasura semifinal, he managed to see the most consistent minutes since his debut season in Holland. Mexico has been a perfect situation for him as he is comfortable with his the culture (where he also holds a Mexican passport through is father), and living in close proximity to the United States has allowed him to see his family regularly.

But even with a rough patch in Europe, Rubio believes the experience helped him.

“I went to Europe, I had my ups, I had my downs, I had my injuries,” Rubin said. “But I enjoyed my time in Europe and it's one of my goals still to go back to Europe and give it a go again. That's where the best teams and the best players are. I am still 22 and I have a lot of soccer in me. But you know how it is. Soccer is crazy. It goes by so quick. At the same time I am being patient, staying positive, keep building as a player - and I think everything will be alright.”

“For Xolos, it's been awesome,” he added. “From the beginning when I got there, I worked my butt off to earn minutes and get starts. I got my first goal and I had a couple of assists. It's been great to go to someplace new and play in a league I dream about. The decision to leave Europe was a decision I have been weighing on for a while but going to Xolos was the right decision. It's been good.”

Going to Europe, of course, is no guarantee of success and a return trip across the Atlantic is no seal of failure either but Rubio’s case shows just how much adversity players can face in their careers and how it can be a difficult path ahead.

With him now in his fourth professional season, Rubio enjoys being one of the veteran players. Through his experience with the U.S. U-17 and U-20 national teams, he has played with many of the team’s players including Matt Miazga, Erik Palmer-Brown, and Cameron Carter-Vickers but this is the first time he taking the field with the team’s teenagers.

After a few practice sessions, he is impressed.

“It's amazing all the potential. I've never really played with McKenne, Pulisic, and Sargent. It's pretty amazing how young they are and that they are in with the full team. And they can really play - they can ball out.”

Like most of the players on the team, Rubio’s place in the team moving forward is not assured. He will have to continue to improve and play well for Club Tijuana in order to earn future call-ups under the next national team coach.

He admits that it is a different environment with the U.S. team after the team’s failure to qualify for the 2018 World Cup but appreciates the tone interim head coach Dave Sarachan has set – telling the group that the team has to move on and that the time is now for young players to raise their game.

With just five caps, Rubio is one of the few players that is both young and new to team but also has important experiences that can help him in a leadership role – something he looks forward to bringing to the team.

“I think the most advice I would give to anyone young on the team is to just enjoy it,” Rubin explained. “Because getting called into the national team is such an honor. I know that when I got the call from Klinsmann, you don't know what the future holds. I could go really well and you get called in all the time or it doesn't go your way and you don't get called into the national team. My advice to young players is to just enjoy it, embrace it, and use it as motivation to be like: 'look, I want to be here every chance possible.'”