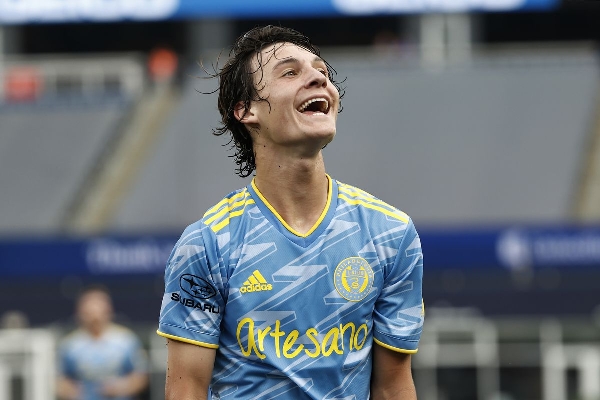 After his U.S. U-20 debut, Aaronson eager for playoff test with Union, eyes big 2022

Paxten Aaronson has understandably been overshadowed a bit by his older brother, but the Medford, NJ native is a top prospect in his own regard and now has massive opportunities ahead with both the Philadelphia Union and the United States U-20 national team. ASN's Brian Sciaretta spoke with Aaronson about transitioning from a prospect and into an impact player.

IT IS EASY TO understand why Paxten Aaronson has been living in his brother’s shadow at the early stages of his career. Brenden Aaaronson has achieved impressive success at the club level – both domestically and now abroad – and is now a starter on the United States national team. His younger brother, however, has made huge strides and is stetting the stage for an important period in his career – starting now.

Aaronson, 18,  returned earlier this week from international duty with the United States U-20 national team and has rejoined the Philadelphia Union ahead of its playoff opener on Saturday.

“Since the beginning of the year, I've obviously seen tremendous growth for myself on and off the field,” Aaronson told ASN. “And I think that just comes with being around older guys in the locker room, you have to mature more and just take more ownership and responsibility of yourself. And also things just like getting extra work in after training or getting extra gym work, being always hungry for more.”

In the 2021 regular season, Aaronson made his first team debut with the Union in May during a win over Portland. He finished the season with 14 appearances and five starts. During his 590 minutes he scored three goals – including one in his first career start on August 8, when he beat U.S. national team goalkeeper Matt Turner.

This season Philadelphia finished in second place in the Eastern Conference and this was surprising to many who expected the team to struggle after selling Brenden Aaronson and Mark McKenzie to European teams last offseason. Aaronson has been around the Union since his days in the club’s academy before his teenage years and he believes the team’s continued success starts with a clear definition of roles and expectations for all players outlined by head coach Jim Curtin.

“It's just keeping the same identity no matter what players are on the field or even at the club,” Aaronson explained. “Every single player in the team knows their role and goes out and executes it - whether it's pressing high on the front foot or keeping the ball.. And Jim always preaches in the beginning of the season that: at one point, one of you will be called upon and you're going to have to make a big step. And I think at some point every player, young or old has had to step up and it's been a big occasion and every single player has stepped up.” 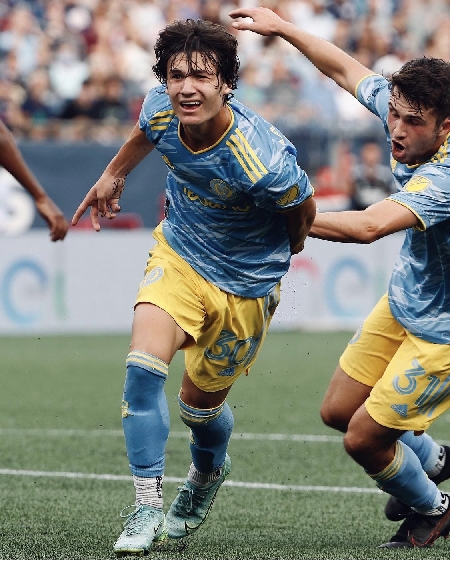 “With Jim, you've seen the success in the academy that we have here,” he added. “And I like to say that the one thing that I think he gives to the young players is trust, and his trust in us goes a long way and trust gives the young players confidence.”

The Philadelphia Union will host the New York Red Bulls on Saturday in a one-game format that will determine advancement to the second round. In addition to possibly making his post-season debut, the 2021 season has also set the stage for an important 2022 season.

“Paxten is going to be really special,” Philadelphia coach Jim Curtin said Aaronson scored in a big 2-1 road win over Cincinnati in October. "Obviously there's good genetics in the family for sure, but his ability to be comfortable in a big game on the road in a hostile environment and want the ball and want to be in part of the big moment and still be running and pressing in the 90th minute to help his team out to get a victory, he's way beyond his years and his experience. He's been incredible this season.”

Paxten Aaronson from Jack McGlynn. The kids are alright and the Union are fun to watch #DOOP pic.twitter.com/0Azwj25jQt

Aaronson saw his older brother made similar strides when he broke into the first team in 2019 but then made the league’s Best XI in 2020.

“It’s about getting gametime and as many starts under my belt,” Aaronson said. “And then as the minutes come, just being that No. 10 who creates a lot of goal situations, getting double-digit goals, multiple assists, just being a creative threat that teams look at on the sheet and realize he can produce something.”

The Aaronson brothers share a lot in common. Both Brenden and Paxten prefer to play the No. 10 but both have learned to be versatile players Brenden has featured as a winger for the national team and occasionally at Red Bull Salzburg too in Austria.

Paxten, meanwhile, features centrally at the Union and Curtin’s system often doesn’t use wingers in a narrow diamond formation. On occasion in 2021, Curtin has shifted to a 4-2-3-1 and Aaronson shifts outside and has found success.

But beyond soccer, the Aaronson brothers remain very tight and that extends to their entire family. The two talk often and look for ways to push each other on the field and help each other through the various challenges they face.

“We have a great relationship,” the younger Aaronson said. “He's had some struggles, so learning off of his struggles, learning things that he wanted to work on more -  me and my dad will work on. We're always discussing just how to be better and bounce ideas off of each other. But I'm always rooting for him, of course. But the relationship between my dad and him, we're super close for you. We're always training together from such a young age to my dad. I can't give him enough credit. Whenever we ask to train, he's always there. He'll take off from whatever just to be around us and just help us. And he's such a big part of our success.”

In addition to a bigger role with the Union, Aaronson also has potentially a big year ahead on the international front. As part of a very talented 2003 birth-year contingent for American soccer, Aaronson is slated to be a big part of the upcoming United States U-20 national team. Next summer, the U-20 team will participate in a single tournament that will serve as qualification for both the 2023 U-20 World Cup and the 2024 Olympics games. The latter is a tournament the U.S. team hasn’t qualified for since 2008. 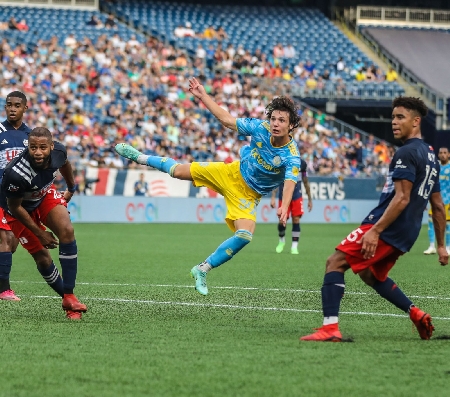 “There's a bunch of top young talents across the board, but it's obviously always such an honor to represent the U.S. in tournaments - big tournaments too,” Aaronson said. “You look across the board, there's guys like Cade Cowell, who's at the MLS All-Star Game, so he's obviously taking such a big steps this year. And then even just like guys on my team, like Quinn Sullivan who has two great goals this year, myself contributing to goals. So there's guys that have been getting consistent minutes in MLS and not only just getting minutes, but contributing in big ways because like Caden Clark. It's just great and you're surrounded by the best of the best in your own age group. So, everyone's obviously going to be pushing each other and it should be really good and really fun.”

The United States U-20 national team recently completed its first camp at the Revelations Cup and Aaronson was only able to participate in the beginning as he needed to return to Philadelphia ahead of the playoffs. At that camp, Aaronson was one of three Union players along with Quinn Sullivan and Jack McGlynn. The U-17 national team also completed its first camp of the cycle and the Philadelphia Union had five players included – more than any other team.

Aaronson is hardly surprised that the Union lead the way with youth national team representation at key age groups and believes the organization is set up for prolonged success.

“It obviously comes down to individual performance, but they do a great job of prepping us at a young age, getting to this moment,” Aaronson said. “It's a great facility built upon being the best, so it's obviously paid off like our academy produces a lot of great homegrowns, as you see, and Mark and Brenden going to Europe. So, it's obviously paying off and everything is just dedicated to the players, which is great to see. They care so much over there at the academy.”