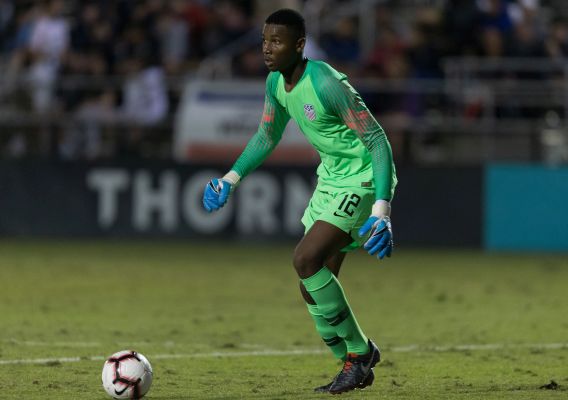 After a long youth journey, Odunze progressing at Leicester City

The early career path of U.S. youth international Chituru Odunze has been long and winding. With stops in the the United States, England, and Canada, the goalkeeper is now settling in at Leicester City where he hopes to climb the club's ladder while also earning a spot on the U.S. U-20 team this cycle. ASN's Justin Sousa spoke with Odunze about his journey so far and his ambitions moving forward.
BY Justin Sousa Posted
May 27, 2020
2:45 PM

ACCESS TO A professional team’s grassroot or affiliate club can be hard to come by for many players in the United States. The size of the country has consistently proven to be one of the biggest hindrances in getting top youth talent into a development system where they can see a path to the professional game clearly. Jaylin Lindsey left his home in North Carolina to play in Sporting Kansas City’s academy and Chris Richards moved from Alabama to Texas to play for FC Dallas before he joined Bayern Munchen.

For Chituru Odunze, the struggle to find and stay in a professional youth academy was the result of him moving across the Atlantic Ocean several times. Odunze moved from North Carolina to London before he’d even turned two and began playing with several local youth clubs including Royal Greenwich JFC, Thames Moorings JFC and Kingfishers JFC. When he was eight years old, he was offered an opportunity to play in Chelsea’s youth development squad before being offered a spot in their academy. He played in Chelsea’s under-9 to under-12 academy teams before his family moved again, but this time to the Calgary, Alberta, Canada.

At this point, Odunze was at a crossroads. The level of play and accessibility to professional clubs was much lower than what was available to him in England, but he also had to start considering his opportunities outside of soccer as well.

“Of course, I come from a very academic background, so my parents didn’t want me to see football as my only life choice at 11,” Odunze said. “We didn’t go searching for any professional clubs at the time. They just put me with the local team just to play because after we moved, they didn’t want me searching for professional teams because Canada is such a big country. Living in Calgary, you can’t really go to a professional team without taking a two-hour flight.”

For the first few years that he lived in Canada, Odunze and his family agreed to hold off from searching for opportunities to play for an academy team. He instead focused on his schoolwork and bounced around between the Calgary Foothills FC, Calgary Blizzards SC and Calgary Villains FC to at least continue playing soccer locally. He eventually earned a call-up to Alberta’s Provincial Championship team where the best players across the Canadian province gathered to play against the country’s top talents.

Not too long afterwards, the Vancouver Whitecaps contacted Odunze about playing for their Development Academy team. He even had the opportunity to go on trial with Cardiff City and train with their first team despite being just 14 years old at the time. The ensuing conversations with his parents to let him explore his opportunities were long and stressful, but he eventually persuaded them to let him join Vancouver’s academy.

Growing up with a family of scholars, it didn’t come as a surprise that Odunze’s academic performances were a priority for both himself and his parents. His two older siblings are currently studying to become doctors while his father is a retired chemist and university lecturer. His mother, amid the chaos of the COVID-19 pandemic, continues to work as a family physician and operate the chain of medical clinics she runs with her husband. Ironically, Odunze didn’t see himself as a scholar in the sciences but had an interest in legal studies while completing his high school education.

“For me to go to Vancouver, I would have had to stay with a family,” Odunze said. “It took us quite a while to convince my parents. My parents said that we still had teams in England that were interested so maybe to wait and see what happened. My coaches from the Vancouver Whitecaps talked to my parents, especially my mom, because I’m their little baby. After a while, my parents said that it might be what was best for me, but they told me that I needed to make sure that I kept my grades right and finished school.”

Once he officially entered the Whitecaps’ youth system, Odunze began to excel both on and off the pitch. He progressed through his academics in no time, graduating with his high school diploma by the time he was 16. After a two-month trial with Leicester City in January, he went on a stellar run at the 2019 Generation Adidas Cup and didn’t concede a single goal throughout the Whitecaps’ five games.

He also received attention from the youth national team set-up, earning his first under-17 call-up in June 2018 and making his debut against Costa Rica in August. Odunze represented the United States at both the Under-17 International Youth Tournament in England and the Nike International Friendlies towards the tail-end of 2018. His final act with the youth national team before leaving Vancouver came at the Under-17 Concacaf Championship where he made two appearances as the United States finished second.

After the tournament, he officially joined Leicester and signed his first professional contract with the club on August 1, 2019. Though his time with the club was predominantly spent with the under-18s, Odunze managed to train with the first team and under-23 squads throughout the 2019-20 season.

“Initially, I was supposed to go to a few clubs when I went [to England] for a few weeks,” Odunze said. “But, after going to Leicester for the first week and them asking me to stay for the second, I was really happy with where I was, and I thought that if I worked hard in that second, I was quite positive that I would be able to impress. I thought that that was the place I wanted to be because the environment’s great and it’s a really nice family club.

“I moved by myself to England,” Odunze continued. “I talked to my parents again, but this time they were actually on board because they saw all my positive growth and success. I told them that I’m going to do this, and I’m going to do it properly, and they were 100% on board.”

Odunze made four appearances in the Premier League 2 for Leicester’s under-18s, keeping his first clean sheet in a 1-0 victory over Arsenal. His career-changing 2019 was topped off by his inclusion in the United States’ roster for the Under-17 World Cup. Despite losing 4-0 to the Netherlands in his second game, he kept a clean sheet in his first game against Japan who came into the tournament as under-17 champions of Asia.

“It was unbelievable,” Odunze said. “That’s one of those things that you can’t even put into words. Walking out, hearing the anthem and seeing the fans…it was like a dream come true. It’s something that you want to keep on doing up until the senior level.”

Odunze returned to Leicester after the tournament but did not make another Premier League 2 appearance this past season. England under-18 goalkeeper Oliver Bosworth solidified his place as the Leicester’s starting goalkeeper, but the added challenge of displacing the Englishman has only encouraged Odunze to work harder for the starting role.

The pandemic may have thrown a wrench into his plans to do so later in the season, but Odunze has continued to train independently back home in Calgary. At the same time, he’s learning to cook from his parents and trying to master Spanish in order to communicate better with his Spanish-speaking teammates. Breaking into a Premier League side at any level can be a daunting task, but Odunze has shown a natural resoluteness throughout his youth career to earn his game time with whatever club he’s played for.