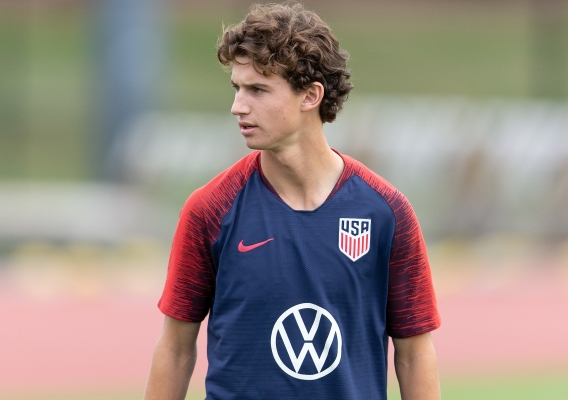 Brenden Aaronson's inclusion into the the USMNT took a lot of people by surprise, but when you look at the upward trajectory he displayed in 2019 and the people he surrounds himself with, it shouldn't have. ASN's Brian Sciaretta spoke with the Philadelphia star rookie last week
BY Brian Sciaretta Posted
October 09, 2019
10:00 AM
TWO WEEKS AGO, Brendan Aaronson received an e-mail that was not completely unexpected. It came from U.S. Soccer and it provided information about upcoming camps for both the United States U-23 team and the full national team. After two consecutive very strong camps for the U.S. U-23 team, Aaronson just figured he was going to be joining up with that group.

Not long after, however, Aaronson, 18, received a second e-mail letting him know he was called up to the full national team.

“When I got a second e-mail saying I made the full national team, it was just crazy,” Aaronson recalled. “It's really a dream come true. I'm just focused and I'm ready to go. Words can't describe it.I feel like my mother and father tried to keep it a little bit. But you could tell that they were ecstatic for me and they were super happy and it was just a really special moment for sure. I am going into this camp trying to do the best I can. I'm confident in how I can do and just really excited to get there and show everybody what I can do there and just do whatever I can for the team.”

The call-up is just another chapter in what has been wild ride in 2019 for the New Jersey native. After singing a homegrown deal with Philadelphia in the winter, Aaronson almost immediately broke into the Union’s starting lineup where he made 25 starts over the course of a season to help Philadelphia finish third in the Eastern Conference.

In May, Aaronson suffered a letdown as he was not selected to the United States U-20 World Cup roster. But he rebounded with very strong performances with the U.S. U-23 team at its camps in June and September. In the September camp, he hit a highlight reel assist in the team’s 2-0 win over Japan. Then in October, he was named to the U.S. roster and will likely be named a finalist for the Rookie of the Year award.

Philadelphia Union head coach Jim Curtin has seen Aaronson’s growth from an early age and is not surprised by his success in his rookie year. Despite Aaronson having had a small, thin frame growing up, Curtin notes that he has always succeeded thanks to a uniquely strong ability in reading the game.

“My relationship with Brenden started when he was 9 years old at the Union Youth Academy when I was coaching there,” Curtin explained. “We tend to look for the most physical, the biggest, the strongest, the fastest, and we neglect the soccer IQ and a soccer brain and that is what's made Brenden be able to raise his level every time he's been called upon.”


On Monday night the US U-23 team defeated Japan 2-0. Here’s the goal from Mason Toye. Brendan Aaronson’s move to beat his defender and hit a wonderful through-ball for the assist is impressive. Both Aaronson & Toye are in great form at the moment pic.twitter.com/m3fi0XWhiq

“I don't look at the game that way at least,” he added. “I look for guys that are first and foremost brave, that want the ball in tight spots. And he has ways of moving his body in certain ways that buys him time and space. He's kid at every level he's gone to he's shown ways to adapt and adjust and thrive, to be honest.”

For Aaronson, also part of his success is the willingness to spend time with veterans and not being afraid to ask questions. The next practice after news of his national team call-up broke, he saw Union captain and former U.S. international Alejandro Bedoya greeting him with a big smile. Aaronson wasted no time in asking Bedoya about what to expect.

But his closest relationship among the veterans on the team is with Haris Medunjanin, who has been capped 60 times for the Bosnian national team. The two roomed together in preseason and whenever the team was on the road during the season.

For Aaronson, the opportunity to learn from veterans such as Bedoya and Medunjanin has been extremely valuable.

“Haris has been a huge part of my role in getting to I am,” Aaronson explained. “We kind of have this bond where I bounce things off of him and we're super close. I owe him a lot for this year. I always ask questions. I think the biggest thing for young guys is, for sure, just ask as many questions as you can, pick their mind and get to know what you can get better at and what they experienced. Harris has said some true things about just training in general. Even in the warm ups - you just have to take everything seriously. You always have to be 100% because that's how you get better.”

While Aaronson has achieved an impressive number of breakthroughs this past year, there is a lot of work ahead to get to the next level. Curtin is well aware of how the United States has failed to regularly produce effective No. 10s and that many promising young players at this position fail to materialize.

For Aaronson to succeed at the next level, his final ball must improve. At times it was clearly there and the best indication was in Aaronson’s goals in each of Philadelphia’s two games against defending champion Atlanta. But in the 2-1 loss in Sunday's season finale against New York City, Curtin believes it was a perfect learning lesson for Aaronson.

“The No. 10 is a hard position to play in our league,” Curtin said. “He can play as a No. 8. But I want to continue to push him to become that No. 10. This New York City game was a great learning example too because against the best team in our conference, he put himself in three positions to score goals - which for any young player is exceptional. The next challenge and the next level for him is to now finish off those plays. That's the one thing I continue to work with him on. And that'll be the biggest step in his development and it's going to come. But can he become like Maxi Morales, who played in the same game? When Maxi gets a final look at goal, it's perfect.”

For Aaronson, he is aware of how he is being challenged by Curtin and it is his responsibility to respond. That came in midseason when he briefly fell out of the starting lineup due to him not making a big enough impact in the game.

“There were some games where I really wasn't making an impact and training was maybe a little down,” Aaronson said. “I think it was more having an impact on the games. I think he was challenging me to sit a couple games out. It's good sometimes to sit two games out, reflect on everything, and then get back in to show why you should be on that field. It was more of a motivating thing.”

But this call-up for October only starts what will be a very important 12 months ahead for Aaronson because the amount of opportunities he has is enormous.

He still has his potential U.S. national team debut in the two games ahead. Then he will return to Philadelphia and have an opportunity to start in playoff games (and for a team that has never won a playoff game in its history). At some point he will likely return to the U.S. U-23 team ahead of qualifying for the Olympics – which could also see him earn a spot on the Olympic team in Tokyo next summer (“The U-23 group is definitely a pretty close-knit group and everybody at the camps were very good. The level is super high there,” he said of that team).

If he takes advantage of those opportunities as well as playing well for Philadelphia in 2020 where expectations for him will be higher, there is World Cup qualifying which starts next September.

For Curtin, however, he eyes longer term success for his prized midfielder.

“If Brenden is doing his part, obviously, his next step is to play in the best leagues in Europe,” Curtin said. “That's really what is his ceiling is and we have to push him to get in there…MLS is a great league and it's a growing league. But it's not it's not the highest league in the world right now. Until it is, I'm always going to want these kids to move on. Win things here in Philadelphia - we get a trophy here in Philadelphia but then also you move on when the time is right.”

For Aaronson, the past nine months have been a whirlwind but he knows that if he wants to continue to push forward, he has to continue to ask questions, listen, and learn lessons – the same traits which have helped him get to this point.

“I mean this year has been crazy in so many ways - but in a good way. I think I am a little more mature now. Also, on the soccer side since I got more games in MLS. Every game you get in MLS you just get more mature and you learn more. That's the biggest thing.”