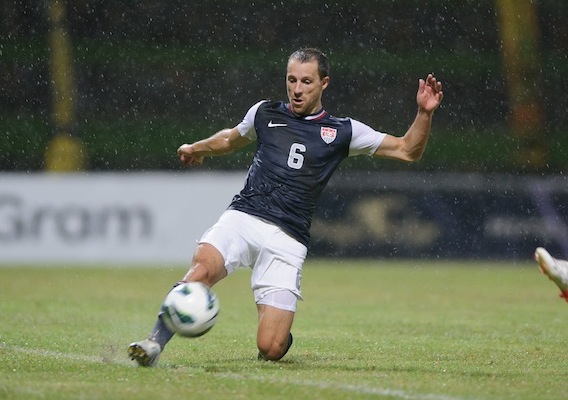 A Right Back Returns and Another One Moves Up

Steve Cherundolo plays in his first competitive match since mid-December, while the Timmy Chandler as right midfielder experiment continues. Elsewhere, members of the ASN 100 keep pouring in goals.
BY Josh Deaver Posted
April 08, 2013
10:34 AM
Steve Cherundolo—ASN rank #7
The Mayor of Hannover is back. In his first action since mid-December, the 34-year-old made his return to Bundesliga action for the club on Saturday, starting and going 90 minutes in a scoreless draw against Stuttgart. Cherundolo has been on the shelf since the German winter break after undergoing foot surgery, causing issues for both club and country. In the 15 matches since his injury, Hannover has gone 4-7-4, slipping to the middle of the German table in the process. With crucial World Cup qualifying matches on the horizon for the U.S., Cherundolo’s return to full health will be a huge factor for the success of the national team in the later stages of the Hexagonal. Timothy Chandler—ASN rank #10
On Sunday, Timothy Chandler started and went 90 minutes for Nurnberg in a 2-1 victory over Mainz. Unbeaten in nine straight and only six points out of a Europa League position, FCN continues to make a late season push. More significant: for the fourth consecutive week, the U.S. defender lined up on the right wing for the Bundesliga side, signaling it could potentially be a permanent lineup move. With defensive depth and a weakness on the wing, Chandler presents an option in that position going forward for the U.S. national team. Herculez Gomez—ASN rank #12
Gomez continues to be a thorn in the side of MLS clubs. On Tuesday, in the first leg of the CONCACAF Champions League semifinals against Seattle Sounders, Gomez went 90 minutes and scored the game’s only goal during a 1-0 win for Santos Laguna. With the tally, Gomez now has 11 strikes in all competitions this season, and is only one from equaling his career-high, set in 2005 with the LA Galaxy. On Saturday Gomez started and went 56 minutes for Santos in a scoreless draw against Club Tijuana. Both Edgar Castillo (ASN #29) and Joe Corona (ASN #27) started for the struggling Xolos. Terrence Boyd—ASN rank #17
Winless in nine straight, Rapid Vienna is struggling. Terrence Boyd, however, continues to display some stellar goal scoring form. On Saturday, Boyd went 90 minutes and picked up a goal for the Green-and-Whites in a disappointing 1-1 draw against Wacker Innsbruck, a team that finished the match with nine men. In the 66th minute, Boyd pounced on a rebound in the box, netting his 12th goal of the season with a cool finish. Despite individual success, the club has massively underperformed this season and is currently embroiled in a three-team race for two guaranteed Europa League spots. Chris Wondolowski—ASN rank #22
Scoring goals is what he does. Boosted by the return of strike partner Alan Gordon (ASN #54), Wondolowski picked up his third goal of the season on Saturday in a 1-1 draw with Vancouver Whitecaps. After receiving the ball in the box, Gordon delivered an excellent touch pass to the onrushing striker, who buried his chance over the Vancouver keeper. The goal, coincidentally in the 18th minute, tied Wondo for 18th all-time in MLS scoring history. Mix Diskerud—ASN rank #32
Although it's only three games into the Norwegian season, Diskerud has picked up where he left off last year. The central midfielder has been impressive for a strong Rosenborg side. Last Monday, he went 90 minutes while picking up his first goal of the season in a 4-0 victory over Brann. In another dominant 4-0 victory on Sunday over Sogndal, Diskerud was again effective, helping to set up the game's second goal with some incisive passing in the six-yard box. Jonathan Spector—ASN rank #43
After being out of action for nearly a month, Spector appeared to aggravate his ankle injury during Birmingham City’s 1-1 draw with Milwall on the weekend. Spector went down during first-half stoppage time and was carted off the field on a stretcher. The severity of the injury is unknown, but it can’t be good for Spector who has missed significant time this season with a variety of injuries. His injury will be evaluated by the team early this week. Jack McInerney—ASN rank #57
The 20-year-old picked up his third goal of the year for Philadelphia Union while going 90 minutes in a 1-1 draw. McInerney, currently tied for third in MLS scoring, was active all afternoon, creating several chances for the Union and causing fits for the Columbus defense. He had eight goals in 2012 and is on pace for a career season. Joe Gyau—ASN rank #71
Making his second consecutive start for St. Pauli in the German 2.Bundesliga, Gyau went 71 minutes and picked up an assist during an exciting 3-2 loss to Dynamo Dresden. Gyau was active throughout the match on Saturday and, if not for a well-timed save, may have picked up his first league goal early in the contest. Early in the second half, Gyau created a breakaway opportunity on a clever turn before slipping a ball to the feet of Daniel Ginczek for the goal. Unfortunately for St. Pauli, they would concede three times in 15 minutes on the way to a tough loss. Andrew Wooten—ASN rank #87
Andrew Wooten has impressed during a loan spell for 2.Bundesliga bottom dwellers Sandhausen. The former U23 forward has picked up five goals in 22 appearances while featuring mostly on the right wing for the club. With the season winding down Franco Foda, manager for parent club Kaiserslautern is excited about the prospects of deploying Wooten for the club next year, potentially in the German top flight. Currently two points clear of third, FCK is battling for a spot in the promotion playoff to potentially rejoin the Bundesliga next season. On Sunday, Wooten started and went 90 minutes for Sandhausen in a 2-1 loss to Duisburg.