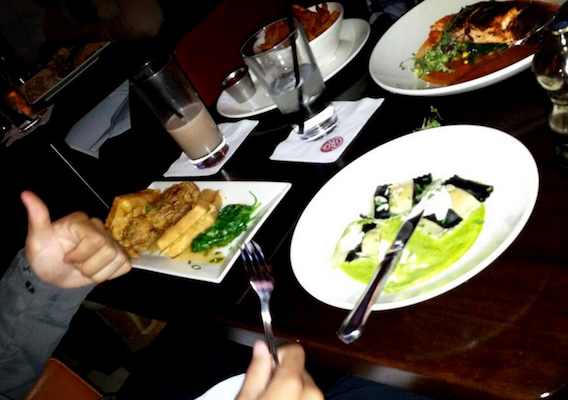 A.J. DeLaGarza Sure Knows How to Eat like a Champ

The Los Angeles Galaxy jack of all trades goes with chocolate milk, water, lobster ravioli, and chicken w/ waffles. Of course he does. Plus, Sacha Kljestan earns some love from the U.S. fanbase.
BY Jesse Yomtov Posted
March 30, 2013
12:34 PM
10. Sean Johnson: Two seconds should be the statute of limitation on handshakes

That awkward moment when you meet someone and shake their hand...but they continue to hold on and shake through the entire convo! Lol

Ooh wee nothing like getting out if practice and knowing you've got a HOT meal waiting for you. YES. *fist pump*

@mauriceedu you taught me well

7. A.J. DeLaGarza: Seriously, this is might be the most eclectic spread of all time

6. Joe Gyau: We know Joe had been struggling with the ladies in Germany, so we’re glad to see he’s finding his footing

For some reason this billboard just doesn't look right!?... twitter.com/AleBedoya17/st…

4. Jay DeMerit: Ah, even an injured Jay is the best

Do I have to watch Mexican players dive and look for calls ALL game??? Stupid question... #MEXvUSA

3. Sacha Kljestan: This is how to earn brownie points with U.S. fans

Needed to get that love I had for the game as a teenager back. Thank God for this feeling I have now and can't wait to get back on the field