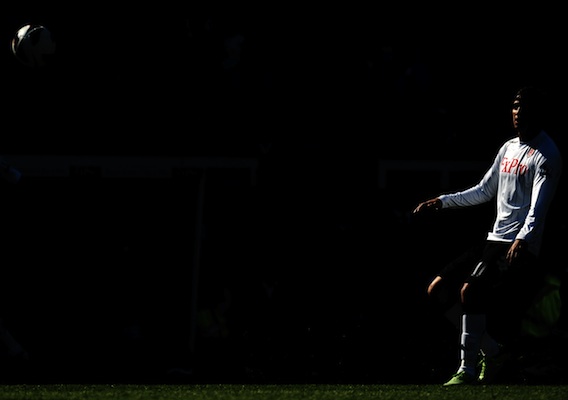 A Banner Weekend for Costa Ricans in Europe

Bryan Ruiz scores twice for Fulham as he and his countrymen wreak havoc in European club soccer. Jon Arnold with those stories and more in his weekly flight across the Pond.
BY Jon Arnold Posted
May 07, 2013
12:30 PM
The five national teams the U.S. faces during the Hexagonal round of World Cup qualifying include players who play outside CONCACAF. You know how the Americans fared abroad each week, but what about the players they’ll be facing? We’ll keep you updated on their progress each week. Also, don’t forget to check out our section dedicated to all things Hex. We’ll focus first on the United States’ next Hex opponents:

Lloyd Doyley wore the captain’s armband in Watford’s wild defeat that saw them miss out on automatic promotion. The 2-1 loss to Leeds means the Hornets are headed to the playoffs to see if they can head up to the Premier League. Huddersfield Town is fighting to stay in the Championship, and a 2-2 draw with Barnsley won’t hurt. Jermaine Beckford scored the opening goal on his return from injury. Theo Robinson didn’t make the team. The draw, coupled with the other results, means both Yorkshire teams are staying up. The news led to a weird pitch invasion with everyone celebrating. Jermaine Johnson returned from injury and was substituted at halftime as Sheffield Wednesday beat Middlesbrough, 2-0. Dane Richard’s second start for Bodo / Gilmt went much better than his first. Richards scored for the club in a 3-0 victory. The Reading trio of Gareth McCleary and Adrian Mariappa, went the full 90 in a 4-2 topping of Fulham. Jobi McAnuff started and came out in the 73rd. On the other hand, Marvin Elliott and Bristol City played like a team already relegated from the Championship, losing 4-1 to Charlton Athletic. Elliott was an unused sub. Ricardo Fuller wasn’t in the Charlton squad. Tremaine Stewart and Demar Phillips didn’t make the Aalesund 18. No Omar Daley in the Motherwell team. His deal is up after the year, so look for him to make an offseason move. Luton Shelton hasn’t played since April 1.

Román Torres returned played the full 90 and Millonarios snapped a two-match winless streak with a 4-1 win against Patriotas Boyacá. Luis Henríquez started and went 80 minutes at center back for Lech Poznan who beat Wisla Krakow, 1-0. Deportivo Anzoategui lost both Wednesday and Friday. Rolando Escobar played 89 minutes of the first loss (2-1 to Caracas) and all of the second (2-0 to Real Esppor). Armando Cooper got back in the Godoy Cruz team and came on for the last four minutes of a 3-0 win against Colón. Gabriel Gomez wasn’t in the Junior team Saturday.

Maynor Figueroa is out for the season after injuring his groin in Wigan’s 2-2 draw against Tottenham. He’ll miss the FA Cup Final this weekend and is a serious doubt for the next set of World Cup Qualifiers with manager Roberto Martinez saying he probably won’t be back for the start of next season. If that timetable is correct, of course, that means no Figueroa when Honduras visits Salt Lake to play the U.S. Roger Espinoza came on with Wigan pushing for an equalizer and helped the team level the score. Osman Chavez missed Wisla Krakow’s match because he was sent off in the previous match. Hard to believe Celtic isn’t just coasting with the championship all wrapped up. Enrique Izaguirre played the full 90 at left back in a 1-1 draw against Ross County. Andy Najar hasn’t appeared in Anderlecht’s first team since his move from D.C. United. Jorge Claros didn’t play for Hibs. Luis Garrido wasn’t in the Red Star Belgrade team this weekend against Jagodina. Carlo Costly and Veria’s season is over. Wilson Palacios actually made an appearance on the Stoke bench in Monday’s match against Sunderland.

Two weeks after winning the starting job, goalkeeper Keylor Navas impressed for Levante in a 1-1 result.
Bryan Ruiz was the lone bright spot for Fulham, scoring a brace in a 4-2 loss to Reading. Here’s the full highlight: Bryan Oviedo sat out of the Merseyside Derby as an unused sub. Joel Campbell came on in the 69th minute for Real Betis, but the Leo Messi show was already underway. Betis lost 4-2 to Barcelona. Celso Borges scored from a tough angle for AIK as the Swedish club defeated league rival Goteborg. Diego Calvo scored the opening goal in Valergen’s victory against Sandnes while countryman Giancarlo Gonzalez came on in the second half. Christian Bolaños and Copenhagen played their second consecutive scoreless draw Sunday. Michael Barrantes went the full 90 for Aalesund and Cristian Gamboa did the same for Rosenborg in a 2-2 draw.

Carlos Vela might’ve been offside, but his remarkable header stood for Real Sociedad. The lead didn’t as Sociedad fell to Getafe, 2-1. Guillermo Ochoa is really good. He salvaged a draw for Ajaccio with three impressive saves in less than one minute. Andres Guardado played the full 90 for Valencia, manning the left back spot in a 4-0 win over Osasuna who was reduced to nine men for the final 15 minutes of the match. Chicharito came on in Fergie time for the Red Devils. He did win a late free kick after Rafael’s sending off. Don’t blame Hector Moreno for Espanyol’s scoring woes – or their defensive lapses either. The center back won’t be happy with a 3-0 loss to Sevilla but had a much better day than his fullbacks. Joan Capdevila scored an own goal 11 minutes in, then was victimized again minutes later. Gio dos Santos played all of Mallorca’s draw with Levante. He had a quiet match by his high standards. Javier Aquino returned to Villarreal after missing the previous two matches with a knee problem. Aquino went the full 90 minutes in a 3-2 loss to Segunda Division leaders Elche. He drew a penalty, but all this escaped the notice of Hex Foes Abroad’s favorite YouTuber “LoMejordeCruzAzul” who makes overly dramatic videos of the former Cruz Azul midfielder. Whose performance strikes the most fear in your heart? Have we missed any players who you think should be in the U.S.’ game tape rotation? Any information you’d like to see in future editions? Let us know in the comments section. Jon Arnold (@ArnoldcommaJon) is a writer based in Arizona and is ASN's CONCACAF correspondent.