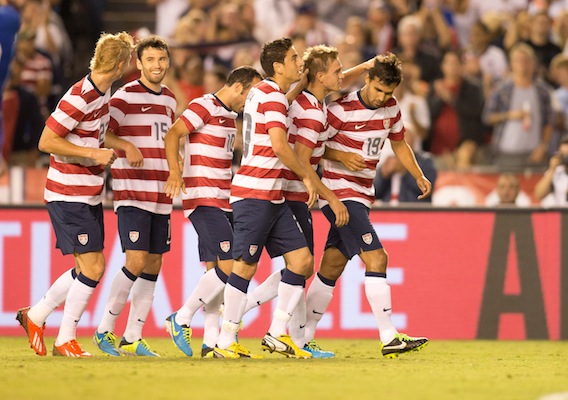 7 Reasons Why the Gold Cup Is Worth Watching

Still wondering whether to pay attention to the 2013 tournament? Stop wondering and start watching. The Gold Cup is compelling for multiple reasons, and ASN's John Godfrey counts them out here.
BY John Godfrey Posted
July 09, 2013
4:21 PM

1. Victory Equals Half a Trip to Russia

Until recently, Gold Cups used to be like Baldwin brothers—you could ignore at least half of them. But thanks to a recent format change, this incarnation of the biannual tournament truly matters. In the past, tournaments that occurred during the same year as the Confederations Cup paid minimal dividends. Those days are over. The 2013 Gold Cup champion will square off against the winner of the 2015 tournament in a one-game playoff to determine who represents the CONCACAF region in the 2017 Confederations Cup in Russia. Federations want to play in that tournament. Coaches want it. Players want it. And because of this you can be certain that passions will be running high this summer, especially when we reach the later stages of the tournament.


2. It’s the Beginning of the End for Landon

Forget about his holiday in Cambodia, the Landon-less loss to Honduras in San Pedro Sula, and Klinsmann’s risky decision to leave Donovan off the roster for the three June World Cup qualifiers. This cycle feels like it’s Landon’s last. EXPLORE AMERICAN SOCCER NOW'S GOLD CUP CHANNEL The 30-year-old version of Donovan struggled with his passion for soccer and spoke candidly about being too tired—too burned out on the game—to play. Imagine how the midfielder will feel at 36, which is how old he will be when the 2018 games kick off in Russia. Donovan is one of the top three or four soccer players in U.S. history, and I have no doubt that he will claw his way back onto the 2014 World Cup team. But there is no way Donovan slogs through another four-year cycle. This is it. Let’s enjoy it while we can.


3. Portland Fans Will Put on a Show

Remember the outrageous show of support the U.S. men’s team received in the Hex match against Panama in Seattle? Portland fans remember, and they’ll be determined to outshout, out-clap, and out-intimidate their Pacific Northwest neighbors when Belize plays the Americans at Jeld-Wen Stadium Tuesday night (11 p.m., Fox Soccer). Expect a spectacle.

American Gold Cup rosters haven’t always inspired awe—especially during the “off” years of the tournament when there was no Confederations Cup payoff at the end of the road. But this year’s squad features a compelling mix of veterans fighting to hang on (or come back), and up-and-coming players looking to make a positive impression. There should be plenty of storylines to supplement the score sheets. And it’s not just the Landon Donovan Redemption Tale or the Stuart Holden Comeback Story or the Damarcus Beasley Feel-Good Special either. Veteran defenders Oguchi Onyewu and Clarence Goodson could be on their way out of the national team picture, and you get the sense they both know it. It’s time for them to step up or step aside. LigaMX midfielders Joe Corona and Jose Torres may be stuck behind the likes of Michael Bradley and Jermaine Jones on the U.S. depth chart, but during the Gold Cup they should have a chance to strut their stuff beyond the occasional mop-up appearance. It will be fun to see what they do with the opportunity. Alejandro Bedoya has never shown much in 15 national appearances. Is he ready to shine? Is Mix Diskerud a too-tender talent or a gentle genius on the ball? And what about this Jack McInerney guy? Even if there is a blowout or two, the intra-squad machinations will be fun to watch.

There is no other way to say it: El Tri, the undisputed bully of CONCACAF in recent years, is reeling. The coach, Jose Manuel “Chepo” de la Torre, has led his players to exactly two wins in 13 matches this year. Mexico has played six World Cup qualifiers in 2013 and has only secured one victory. And on Sunday, Mexico lost to Panama in the opening day of the Gold Cup. For American fans who suffered through Mexico’s 5-0 Gold Cup final victory in the Meadowlands in 2009, this is all catnip. For those who watched Mexico win the 2011 Gold Cup in the Rose Bowl in Pasadena, there is no pity. What happens this year? U.S. supporters will be watching.


6. The Minnows Are Making Noise

Is there a more exciting player in Major League Soccer? Is there a more promising American player who is still not legally able to order a beer in a U.S. bar? Jack McInerney made the 23-man Gold Cup roster, and if/when he comes onto the pitch for the Stars and Stripes, American fans will roar in unison. We can’t wait. John Godfrey is the founder and editor in chief of American Soccer Now.