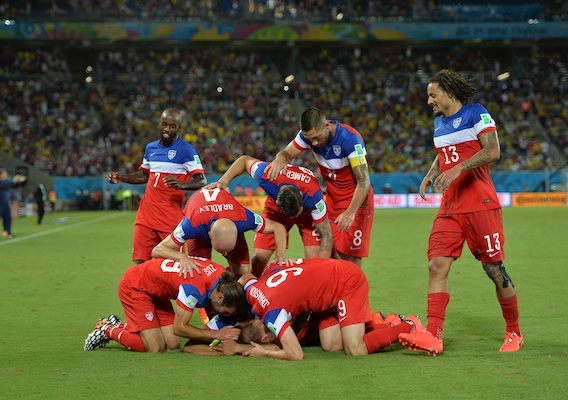 6 Thoughts on the United States' Victory Over Ghana

American Soccer Now's Brian Sciaretta shares his observations on the United States' crucial 2-1 victory over Ghana. American toughness, the U.S. backline, and MLS "lifers" all deserve a slow clap.
BY Brian Sciaretta Posted
June 17, 2014
9:23 AM
AMERICAN SOCCER FANS will remember last night's 2-1 victory over Ghana for a long, long time—and justifiably so. The United States sought, and achieved, revenge against the team that eliminated the Yanks from the last two World Cups. Last night was about celebrating, but today is about beginning preparations for Portugal. Here are a few observations from Monday's victory in Natal.

While it's true that Ghana dominated possession for long stretches, especially in the second half, it's also worth pointing out that winning ugly is better than losing pretty. Ghana was an extraordinarily motivated and talented team last night. It had beaten the U.S. and advanced to the round of 16 in 2006, and went all the way to the quarterfinals in 2010. So the win was significant. For the Americans to advance out of Group G, it will have to play better. Fortunately, it can play better. That will be the focus between now and Sunday, as it should be. Still, World Cup success is evaluated on a game-by-game basis, and results are all that matters.

The U.S. national team was not just up against Ghana: It had to deal with three injuries to key players. Jozy Altidore and Matt Besler left the match with hamstring injuries and Clint Dempsey was not the same after taking a John Boye boot to the nose. (Dempsey later revealed that his nose was broken.) The injuries forced Klinsmann and co. to adjust their game plan, and they did. Aron Johannsson replaced Altidore and, paired with a wounded Dempsey, struggled to create much offense. But the 21-year-old John Brooks stepped in for the veteran Besler and scored the game-winning goal. Against an athletic and motivated Ghana squad, the Americans stepped it up and found a way to eke out a win—a sign of a quality team.

3. Michael Bradley did not play well

Over the past few years, Klinsmann has built the U.S. national team around Michael Bradley. The offense flows through him in the midfield and Bradley is the “general,” dictating the play more often than not. Bradley, a remarkably consistent player, deserves to be the centerpiece of the team.

This game, however, proved difficult for Bradley as he turned the ball over way too many times and failed to link up with his forwards effectively. The No. 1 player in the ASN 100 also struggled at times in the Send-Off Series friendlies, most notably against Azerbaijan on May 27. Bradley, however, remains the Yanks' best player and he is likely to rebound with a better game against Portugal. The fact that the team can win a difficult game when Bradley has an off-night is a very positive sign for Klinsmann. It means that other teams cannot expect to win simply by devising a gameplan that neutralizes the 26-year-old midfielder.

4. There's a clear path to the next round

Most pundits have said that Group G is the toughest in the World Cup, and that it would be an uphill climb for the U.S. to advance. The win over Ghana was a necessary first step, but there's more work to be done. Monday's results will encourage Klinsmann and his men. When you factor in Germany's decisive 4-0 win over Portugal, the United States can earn a draw with Portugal on Sunday and find itself in a great position to advance. A tie would give the United States four points and a +5 goal differential over Portugal. Assuming the powerhouse Germans defeat Ghana on Sunday, the standings would look like this: Germany 6 points
United States 4 points
Portugal 1 point
Ghana 0 points If that happens, the United States will have the inside track on second place in Group G, and a ticket to the knockout stages. Of course, if the U.S. defeats Portugal in Manaus, then there is no need to worry on the final day of group play.

The biggest question mark heading into this tournament was the United States national team's backline. Against Ghana, the defense was instrumental in the win. Geoff Cameron was remarkable in central defense. Matt Besler was also superb before being forced out, and Brooks stepped up and delivered the memorable winner. Fabian Johnson and DaMarcus Beasley were uneven at times, and Johnson has to shoulder much of the blame on Andre Ayew's goal. Overall, however, the defense had a lot of work to do against a rampant Ghana squad, and it got the job done.

Three key contributors in last night's win have played their entire careers in Major League Soccer: Kyle Beckerman, Graham Zusi, and Matt Besler. All three delivered solid performances for their country. Matt Besler was terrific until he was forced out at halftime. Kyle Beckerman shielded the backline effectively and provided clean passes in the midfield—precisely what Klinsmann needed from him. The Real Sal Lake captain helped pick up the slack in the midfield from a struggling Michael Bradley. Graham Zusi came off the bench and provided the game-winning assist. The victory proved to be good PR for the league, and much more. It should give MLS players confidence that they can compete at the highest level, and it should encourage Klinsmann to continue utilizing MLS talent within the national team. OK, your turn. What do you think of Brian's observations? Tell us in the Comments section below. Brian Sciaretta is an American Soccer Now columnist and an ASN 100 panelist. Follow him on Twitter.